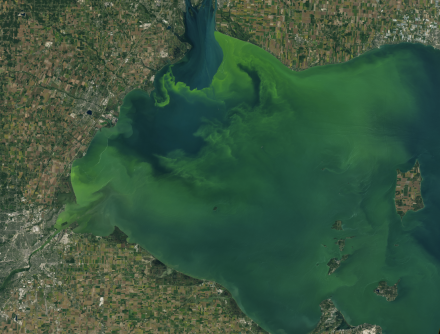 When agricultural runoff reaches water, it can fuel blooms of cyanobacteria that can produce toxic chemicals. This satellite image shows a bloom (in green) on Lake Erie in 2017. 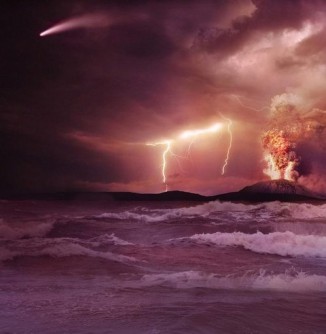 Today’s plants and microbes use photosynthesis to create oxygen that’s used in many important biochemical reactions. But life on primordial Earth wasn’t as green as it is today, as shown in this artist’s conception. Without so much oxygen around, early life may have fueled similar reactions with nitric oxide and related nitrogen compounds instead, in ways illustrated by new research from MSU. 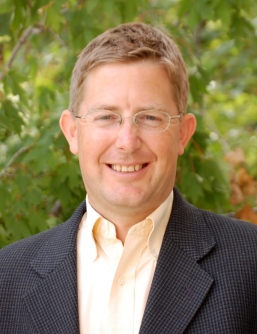 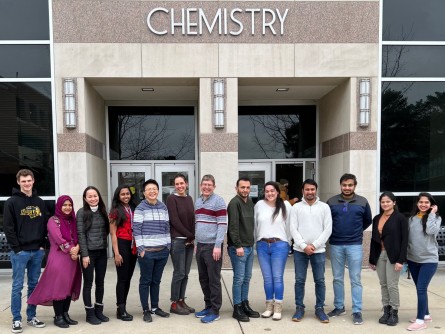 Members of the Warren Lab at MSU

Newswise — EAST LANSING, Mich. – Nitrogen may not get the same level of attention as its neighbors on the periodic table, carbon and oxygen. But like its neighbors, it’s an element we can’t live without.

Nitrogen compounds have important roles in biology, including lowering blood pressure, helping relay signals in our bodies and providing nourishment for plants. In fact, industrially made fertilizers rich in nitrogen have effectively doubled the world’s food-growing capacity.

Yet too much of anything can be bad, and nitrogen is no exception. For instance, when rain washes excess fertilizer away from fields and into lakes, rivers and other bodies of water, the nutritious compounds within can fuel surging populations of microbes that can suffocate or poison natural ecosystems.

Underlying nitrogen’s impacts, helpful and harmful alike, is what’s known as the nitrogen cycle. That’s the collective name for the chemical processes that nature’s biological and geological systems use to break down nitrogen compounds and shuttle the products through the environment. Although science has developed much of the nitrogen cycle’s big picture, Michigan State University’s Timothy Warren and his team are now drilling down into its fundamental chemical details.

The team recently released two new peer-reviewed reports on that front in two different high-profile chemistry journals: Nature Chemistry and the Journal of the American Chemical Society, or JACS.

What Warren and his team recently found won’t provide any immediate fixes for, say, making and using fertilizers in a more sustainable way. But the researchers are creating a more intimate understanding of the nitrogen cycle that could lead to holistic solutions for ensuring a healthy balance of nitrogen, wherever it’s needed.

In the meantime, the papers also serve as a reminder that nature is still full of consequential mysteries — some of which predate people and plants.

“We’re very much inspired by what we find in nature, but we’re trying to understand ways that nature behaves that we haven’t picked up on yet,” said Warren, Barnett Rosenberg Professor and chair of the Department of Chemistry in the College of Natural Science.

“There’s the established dogma of how things work, but by digging a little deeper and trying to go beyond that, we open up science to surprises.”

In addition to uncovering a few new revelations, both papers help describe the nitrogen cycle with greater detail and precision than was previously possible. Despite their similarities, though, they also come with different sets of implications.

Primordial chemistry with a ‘nitro boost’

At the risk of oversimplifying an entire scientific field, chemistry is concerned with how atoms are exchanged and rearranged when different molecular participants are involved. Some of the most intriguing interactions are those that are essential for life, those that improve our quality of life or those that help scientists better understand how life on this planet works.

The nitrogen cycle’s reactions can check all three boxes, as evidenced by those highlighted in the Warren team’s papers.

“These two reports provide fundamental new insights into molecules that are important parts of the biogeochemical nitrogen cycle. That cycle is critical for ecosystems to work and be healthy,” Warren said. “What we’re doing is peering into molecules in new ways to better understand their connection to that cycle.”

In particular, the team’s JACS paper illuminates a new pathway that nature may use to convert nitric oxide into nitrous oxide, which are both important molecules in their own rights.

Nitric oxide, made of one nitrogen atom and one oxygen atom, was named “Molecule of the Year” in 1992 by Science magazine. And people may recognize nitrous oxide, which contains two nitrogen atoms and one oxygen, from its starring role in laughing gas or its supporting role as “nitro boost” in the “Fast and Furious” movie franchise.

Again, Warren’s team is aware of the molecules’ applications, but the researchers are driven by what these reactions reveal at a more fundamental, chemical level. The JACS paper, for instance, reveals nitric oxide is surprisingly adept at accepting electrons from other reactants.

Under the right conditions, nitrous oxide can also be a good electron acceptor, but oxygen provides a steadfast standard in this arena. That’s why chemists refer to such electron acceptor compounds as oxidants, oxidizers and oxidizing agents. Oxidizers famously cause metal to rust, but they are also critical to many important biological and industrial reactions.

But oxygen wasn’t a readily available commodity in the Earth’s atmosphere until the planet was a couple of billion years old. That’s when the first microbes started emitting it, with plants later following suit through photosynthesis.

“Nature was doing oxidation chemistry before the Great Oxidation Event, before photosynthesis kicked off,” Warren said. “That means both nitric oxide and related nitrogen compounds were probably important oxidants in primordial life, before the Earth had a lot of oxygen.

“It turns out that nature has evolved enzymes that can do that oxidation chemistry with these compounds,” he said. “This paper provides new insights on how nature uses them today and perhaps even before oxygen was abundant.”

The story of a broken molecule

The team’s Nature Chemistry paper focused on a different part of the nitrogen cycle, one that starts with a compound known as nitrite, a negatively charged molecule consisting of a nitrogen atom bound to two oxygen atoms.

Nitrite shows up in a lot of places, many of which reflect the duality of nitrogen. Nitrite is in fertilizers that help plants grow. It’s also in the runoff that pollutes aquatic ecosystems.

Nitrite is found naturally in healthy levels in fruits and vegetables. At the same time, doctors recommend limiting our consumption of processed meats, in which nitrite salts are used as preservatives in comparatively high levels.

When it comes to nitrite, the divide between boon and burden is tied to the dosage, but also in whether and how it’s metabolized or converted into other compounds. That means, with a better understanding of the nitrogen cycle, chemistry could help mitigate nitrite’s harmful effects by developing enzymes or other catalytic tools that put it on a track toward more beneficial downstream products. Notably, that includes nitric oxide, 1992’s “Molecule of the Year.”

Soil microbes have enzymes that convert nitrite to nitric oxide in a highly choreographed set of chemical interactions that happen at the same time. Warren’s team has found a way to break that process apart into a stepwise, sequential affair. Finding this synthetic approach to mimic nature will allow chemists to better probe different aspects of the reaction.

This will help chemists be more deliberate in designing catalysts that can do things like help break down fertilizer nutrients before they reach natural waterways. It also opens up applications further removed from nitrogen’s role in nature, Warren said, such as in the long-term storage of nuclear waste where nitrites are present. In its study, the team also discovered some new chemistry that could even help boost undergraduate grades.

“In every general chemistry course, whether you take it at MSU or somewhere else, you learn that nitrite is an anion with an electric charge of -1. But if it is accidentally assigned a charge of -2, we’ve found a way that shows this can be right too,” Warren said.

“We’ve revealed a new fundamental molecule in nature: nitrite with a -2 charge. There hasn’t been much discussion of it before, except as a fleeting species in nuclear waste or perhaps when students get it wrong on exams.”

There’s obvious excitement in Warren’s voice when he talks about the implications of the work. That excitement turns to joy when he talks about the teamwork that enabled this discovery. This effort was led by Valiallah “Val” Hosseininasab, the first author of the Nature Chemistry report, who earned his doctoral degree after completing this project as a member of Warren’s lab. He’s now a postdoctoral researcher at the Massachusetts Institute of Technology.

“Val is a very creative chemist. He was working on a similar idea with another project and decided to try it with nitrite. He showed the result to a lab mate before a group meeting, where the lab mate proclaimed, ‘I think Val broke it. He broke the nitrite anion!’” Warren said. “And Val’s colleague wasn’t wrong. Val made this molecule that ought not exist, which launched a quest to figure out the story that this broken molecule might tell.”

Warren’s team was joined by collaborators from Cornell University, Stanford University and the SLAC National Accelerator Laboratory on the Nature Chemistry paper (SLAC is a nod to the facility’s original name, the Stanford Linear Accelerator Center). A collaborator at the University of North Texas also contributed to the JACS paper.

“It’s just a lot of fun to work with a creative team to come up with things that would be difficult to dream of, things that simply appear on the outside as wrong or broken,” Warren said.

Researchers at Georgetown University, where Warren worked before joining MSU in 2021, also contributed to both publications. Warren is excited to continue looking for nature’s surprises with his lab at Michigan State. He’s also asking his new colleagues in the department to show some leniency to students who write nitrite with a -2 charge.

Michigan State University has been advancing the common good with uncommon will for more than 165 years. One of the world's leading research universities, MSU pushes the boundaries of discovery to make a better, safer, healthier world for all while providing life-changing opportunities to a diverse and inclusive academic community through more than 200 programs of study in 17 degree-granting colleges.