The microfluidic device can detect the level of hemoglobin in a whole blood sample using optical absorbance without the chemical preparations of standard processes.

Newswise — WASHINGTON, D.C., October 3, 2017 -- About one quarter of the world’s population suffers from anemia, a disease caused by a concentration deficiency of hemoglobin in red blood cells. To reduce the burden of anemia, health officials need a better picture of the disease's global impact, an understanding made viable by a portable and affordable way to analyze blood.

Researchers at the University of Washington developed a device smaller than a toaster that can detect the level of hemoglobin in whole blood samples using optical absorbance. The work is published this week in AIP Advances, from AIP Publishing.

Hemoglobin is a protein found in red blood cells that transports oxygen throughout the body. As the concentration of hemoglobin decreases, the body becomes starved of oxygen, often resulting in dizziness, fatigue, shortness of breath, and abnormal heart rate.

Blood analyzers currently on the market measure hemoglobin by chemically rupturing the red blood cells in a sample. This technique requires hands-on expertise to prepare and run a sample, limiting the ability to monitor anemia in many parts of the world.

“The most exciting aspect to this analyzer is that it uses whole blood and does not require the additional steps and reagents to prepare a sample,” said Nathan Sniadecki, associate professor in mechanical engineering at the University of Washington and one of the authors.

The device only requires a few drops of blood for analysis.

“You just run blood into the channel and that’s it,” said Nikita Taparia, a doctoral candidate in Snaidecki’s lab and another author. “It can be used anywhere.”

The analyzer takes advantage of the optical properties of blood, such as absorption and scattering, to measure hemoglobin concentration. Anemic blood transmits more light compared to normal blood, so the severity of anemia can be measured as a ratio of transmitted to original light intensity.

To simulate anemia, the researchers diluted blood samples with a buffer solution. The blood analyzer was effective at predicting cases of moderate to severe anemia, defined as less than 10 grams per deciliter of hemoglobin in a sample. The analyzer did not produce any false negative results.

The optical density of samples did not increase linearly, so a higher concentration of hemoglobin defines the upper limit of detection for the device.

The primary cause of anemia is iron deficiency, but it can co-occur with other conditions, such as malaria and genetic disorders like sickle cell. Severe anemia can lead to increased maternal and child mortality. It also impairs cognitive and physical development in children.

“It has been really rewarding to be part of a project from start to finish that produced a device that will really help people,” Taparia said. “This analyzer is meant for people who have disease.”

The current design is a prototype that could be integrated with other microfluidic devices to analyze whole blood samples in parallel to diagnose anemia and other underlying factors that could contribute to the disease.

The research received support from a Department of Education GAANN Fellowship and a National Science Foundation Grant.

AIP Advances is an open access peer-reviewed scientific mega journal published by the American Institute of Physics. It covers all aspects of physics, both experimental and theoretical. See http://aip.scitation.org/journal/adv. 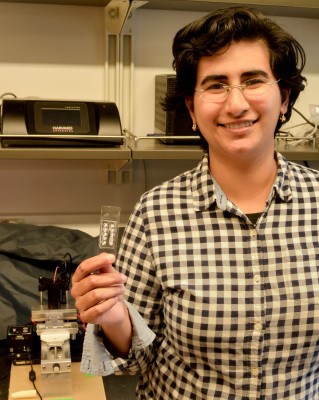 Caption: Nikita Taparia stands with a microfluidic card in her hand, next to the optical analyzer. 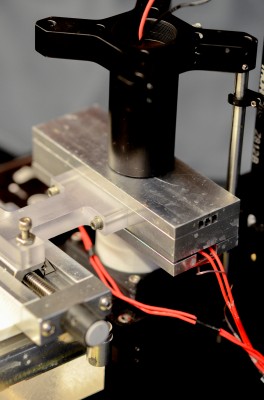