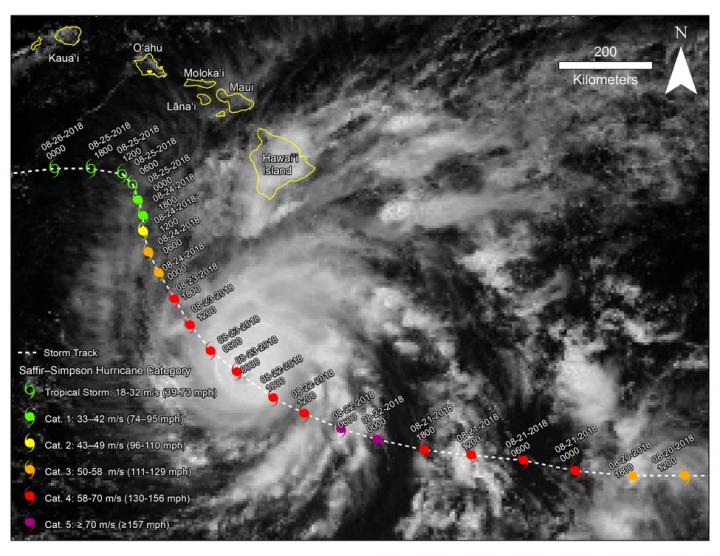 The background image shows a visible satellite image of Hurricane Lane on August 22nd, 2018 when its eye was centered near the Hawaiian Islands. The white dashed line indicates the track of Lane, labeled with dates and times (UTC), and the color of the hurricane symbol indicates the strength of winds in the storm.

Newswise — Hurricane Lane was an impactful event for the Hawaiian Islands. In August 2018, over a four-day period, the island of Hawai'i received an average of 17 inches of rainfall, with a four-day single-station maximum of 57 inches, making Hurricane Lane the wettest tropical cyclone ever recorded in Hawai'i. A recently published study, led by University of Hawai'i at Mānoa researchers, details the compounding hazards--fire and rain--produced by the storm.

"In this study we document what we believe to be the first instance of a hurricane causing both heavy rainfall and contributing to multiple instances of fire simultaneously," said Alison Nugent, lead author of the study and assistant professor of Atmospheric Sciences in the UH Mānoa School of Ocean and Earth Science and Technology (SOEST).

A team of UH Mānoa and East-West Center scientists analyzed multiple aspects of the storm's meteorology and climatology, the environmental conditions leading up to the storm, and documented the associated societal impacts.

They found that land-use characteristics and preceding moisture conditions exacerbated fire hazard, and both fire and rain severity were influenced by the hurricane environment and local topographic features. Conditions at the edge of the storm resulted in dry windy weather conducive to fire, while closer to the storm center, the incredibly moist atmosphere lifted by Hawai'i's mountains brought intense, long-lasting rainfall. The simultaneous occurrence of rain-driven flooding and landslides, strong winds, and multiple fires complicated emergency response.

The vulnerability of a population in any given location to the impacts of tropical cyclone hazards is determined by a multitude of interacting factors. Biophysical aspects include distance inland from the coast, terrain slope, coastal ecosystem integrity, and land surface cover. Socioeconomic factors include infrastructure quality, the availability of early warning systems, and capacity for evacuation and emergency response.

"The surprising thing about Hurricane Lane was that, despite never making landfall, the storm caused considerable damage and disruptions across the state from two rather contradictory things: fire and rain," said Nugent. "Severe flooding on the windward island of Hawai'i Island built over several days, and multiple fires initiated on the lee sides of Maui and O'ahu within hours of each other. Hurricane Lane is one of only three documented cases of hurricanes influencing wildland fire risk in real-time."

In Hawai'i, landfall by hurricanes is relatively rare due to persistent vertical wind shear over the islands, which weakens hurricanes by essentially tipping them over. However, when hurricanes do occur near Hawai'i, the geography of the islands can exacerbate the hazards. The nearly 750 miles of coastline makes much of the state susceptible to coastal flooding, and the mountainous topography can enhance high-intensity rainfall, as well as intensifying wind speeds. In addition, the steep mountainous terrain can enhance flash flooding and trigger landslide events.

In the future the team plans to develop the analytical approaches and Hawai'i-focused climate products needed to assess and prepare for future impacts, especially in the context of a changing climate where intensity and frequency of extreme events is likely to increase.

Caption: The background image shows a visible satellite image of Hurricane Lane on August 22nd, 2018 when its eye was centered near the Hawaiian Islands. The white dashed line indicates the track of Lane, labeled with dates and times (UTC), and the color of the hurricane symbol indicates the strength of winds in the storm.

Bulletin of the American Meteorological Society