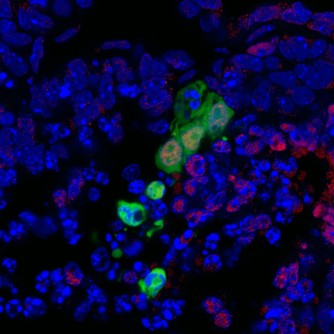 In this image, a novel type of human stem cell is shown in green integrating and developing into the surrounding cells of a nonviable mouse embryo. Red indicates cells of endoderm lineage. Endoderm cells can give rise to tissue that covers organs from the digestive and respiratory systems. The new stem cell, developed at the Salk Institute, holds promise for one day growing replacement functional cells and tissues. 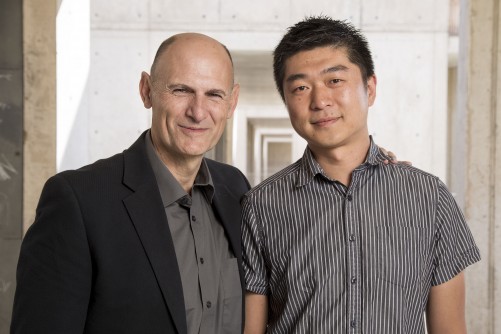 Newswise — LA JOLLA—Scientists at the Salk Institute have discovered a novel type of pluripotent stem cell—cells capable of developing into any type of tissue—whose identity is tied to their location in a developing embryo. This contrasts with stem cells traditionally used in scientific study, which are characterized by their time-related stage of development.

In the paper, published May 6, 2015 in Nature, the scientists report using these new stem cells to develop the first reliable method for integrating human stem cells into nonviable mouse embryos in a laboratory dish in such a way that the human cells began to differentiate into early-stage tissues.

“The region-specific cells we found could provide tremendous advantages in the laboratory to study development, evolution and disease, and may offer avenues for generating novel therapies,” says Salk Professor Juan Carlos Izpisua Belmonte, senior author of the paper and holder of Salk’s Roger Guillemin Chair.

The researchers dubbed this new class of cells “region-selective pluripotent stem cells,” or rsPSCs for short. The rsPSCs were easier to grow in the laboratory than conventional human pluripotent stem cells and offered advantages for large-scale production and gene editing (altering a cell’s DNA), both desirable features for cell replacement therapies.

To produce the cells, the Salk scientists developed a combination of chemical signals that directed human stem cells in a laboratory dish to become spatially oriented.

They then inserted the spatially oriented human stem cells (human rsPSCs) into specific regions of partially dissected mouse embryos and cultured them in a dish for 36 hours. Separately, they also inserted human stem cells cultured using conventional methods, so that they could compare existing techniques to their new technique.

While the human stem cells derived through conventional methods failed to integrate into the modified embryos, the human rsPSCs began to develop into early stage tissues. The cells in this region of an early embryo undergo dynamic changes to give rise to all cells, tissues and organs of the body. Indeed the human rsPSCs began the process of differentiating into the three major cell layers in early development, known as ectoderm, mesoderm and endoderm. The Salk researchers stopped the cells from differentiating further, but each germ layer was theoretically capable of giving rise to specific tissues and organs.

Collaborating with the labs of Salk Professors Joseph Ecker and Alan Saghatelian, the Izpisua Belmonte team performed extensive characterization of the new cells and found rsPSCs showed distinct molecular and metabolic characteristics as well as novel epigenetic signatures—that is, patterns of chemical modifications to DNA that control which genes are turned on or off without changing the DNA sequence.

“The region selective-state of these stem cells is entirely novel for laboratory-cultured stem cells and offers important insight into how human stem cells might be differentiated into derivatives that give rise to a wide range of tissues and organs,” says Jun Wu, a postdoctoral researcher in Izpisua Belmonte’s lab and first author of the new paper. “Not only do we need to consider the timing, but also the spatial characteristics of the stem cells. Understanding both aspects of a stem cell’s identity could be crucial to generate functional and mature cell types for regenerative medicine.”

The research was supported by the Universidad Católica San Antonio, the Howard Hughes Medical Institute, the Fundacion Pedro Guillen, the G. Harold and Leila Y. Mathers Charitable Foundation, the Leona M. and Harry B. Helmsley Charitable Trust and the Moxie Foundation. About the Salk Institute for Biological Studies:The Salk Institute for Biological Studies is one of the world's preeminent basic research institutions, where internationally renowned faculty probes fundamental life science questions in a unique, collaborative and creative environment. Focused both on discovery and on mentoring future generations of researchers, Salk scientists make groundbreaking contributions to our understanding of cancer, aging, Alzheimer's, diabetes and infectious diseases by studying neuroscience, genetics, cell and plant biology and related disciplines.