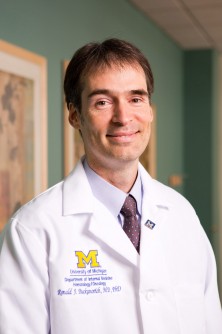 Newswise — ANN ARBOR, Michigan â€” Researchers have identified a protein that helps ovarian cancer cells multiply and spread. By blocking it with a new antibody agent, they could slow the cancerâ€™s growth and stop it from metastasizing.

The finding has potential to lead to a treatment to prevent or limit ovarian cancer in women at high risk.

The researchers looked at EGFL6, a growth factor that drives cell growth and regulates stem cells. Itâ€™s best known for its role in hair follicles. Researchers suspected it might also play a role in ovarian cancer stem cells.

When they triggered EGFL6 in ovarian cancer cells, it stimulated the cancer to grow two to three times faster. This held in both cell lines and in mice. When researchers eliminated the EGFL6, tumors grew very poorly, about four times more slowly. Results appear in Cancer Research.

Researchers found that EGFL6 acts specifically on cancer stem cells. Cancer stem cells are believed to fuel the growth and spread of cancer. They are often resistant to current chemotherapy and radiation treatments.

â€śWhat this means is that the stem cell population remains stable. But the daughter cells, which can have a burst of growth, multiply and allow the cancer to grow,â€ť says Ronald J. Buckanovich, M.D., Ph.D., a professor of hematology/oncology and gynecologic oncology at the University of Michigan Medical School.

However, EGFL6 does not only promote proliferation. Once again working with the engineers, the team demonstrated that EGFL6 promoted cancer stem cell migration. In addition, when EGFL6 was added to blood vessels, the cancer was more likely to metastasize.

When researchers treated mice with an EGFL6 blocking antibody, they saw a 35 percent reduction in the cancer stem cells and significant reduction of tumor growth overall. The antibody also blocked the cancer from metastasizing.

Buckanovich suggests that this could be a potential therapy for women with stage 3 ovarian cancer â€“ a way to control the disease by blocking the cancerâ€™s growth and spread.

â€śThe bigger implication is for women at high risk of ovarian cancer,â€ť he notes. â€śThese patients could be treated before cancer develops, potentially blocking cancer from developing or preventing it from spreading. If cancer did develop, it could be diagnosed at an early stage, which would improve patient outcomes.â€ť

The researchers will next seek to convert the antibody into something appropriate for humans. This therapy is not currently available.