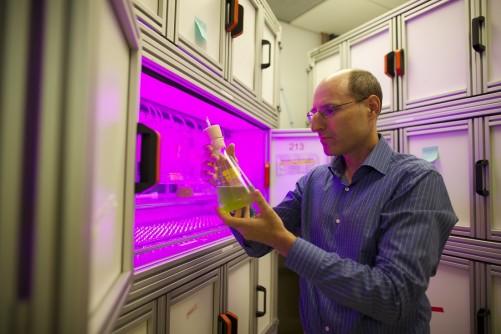 The grant will enable the Umen and Singh groups to begin unraveling the intriguing “counting” mechanism that underlies Chlamydomonas cell division, in which a period of uninterrupted growth (by as much as twenty-fold in size) is followed by a series of rapid successive divisions to produce daughter cells that return to a uniform starting size. For this mechanism to operate properly, larger mother cells must “count out” more divisions than smaller mother cells; but the division system exhibits imperfections. For example, two different Chlamydomonas mother cells of the exact same size won’t always execute the exact same number of divisions; but the reasons for differing cell behaviors in the face of seemingly identical starting conditions are unknown.

Although human cells don’t divide exactly the same way as Chlamydomonas, they also must make yes/no decisions about cell division that directly impact human health and disease.  For example, cancer and other human diseases of cell proliferation occur when cell division decisions are made incorrectly. Cell size is often impacted by proliferative diseases, but it is not clear how cell size relates to abnormal cell physiology. In addition, some of the same molecular mechanisms controlling cell division in Chlamydomonas are also found in humans and in plants, so this research may yield insights into how cell division is controlled in more complex organisms where it is more difficult to study the impacts of noise on cellular decision making.

“Noise or stochasticity in decision making permeates biology, but the sources of noise and how they interact with more deterministic aspects of cellular control systems are poorly understood,” said Umen. “This grant will enable us to model and better understand how noisy decision-making impacts cell division in Chlamydomonas, and may also provide insights into other areas of biology that are impacted by stochastic behavior.”

The grant will also support an educational component aimed at exposing students to topics at the interface of mathematics and systems biology through collaborative training of graduate students, summer workshops at the University of Delaware, and the National Science Foundation funded Research Experience for Undergraduates summer internship at the Danforth Center.