13-Feb-2017 10:05 AM EST, by National Institute of Biomedical Imaging and Bioengineering
favorite_border 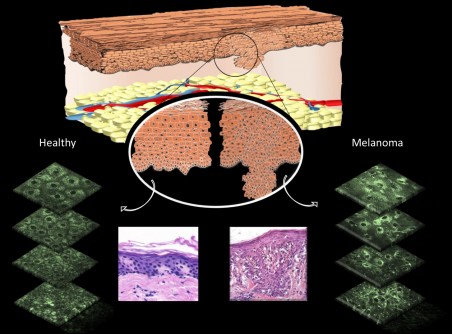 Newswise — Researchers funded by the National Institute of Biomedical Imaging and Bioengineering have developed a non-invasive imaging technique that accurately detects skin cancer without surgical biopsy. Multiphoton microscopy of mitochondria—small organelles that produce energy in cells—accurately identified melanomas and basal cell carcinomas by detecting abnormal clusters of mitochondria in both types of skin cancer.

Skin cancer is the most common type of cancer in the U.S. and most types of skin cancer are highly treatable, especially if detected early. “The technology developed here has the potential to make the detection of skin cancers extremely rapid and feasible at very early stages,” says Behrouz Shabestari, Ph.D., director of the NIBIB Program in Optical Imaging and Spectroscopy. “Rather than taking a biopsy sample that must be processed and then examined under a microscope by a pathologist, this system involves simply looking through the microscope at the patient’s skin and determining whether it is cancerous or not, within minutes.”

A group of international collaborators led by co-senior author Irene Georgakoudi, Ph.D., in the Department of Biomedical Engineering at Tufts, found that mitochondria behave very differently in healthy versus cancerous tissue. They used a laser microscopy technique that takes advantage of the characteristics of a key molecule in mitochondria, nicotinamide adenine dinucleotide (NADH), that is central to energy production. They found that NADH, which naturally fluoresces without injecting any dye or contrast agent into the individuals being screened, can be detected using multiphoton microscopy to provide diagnostically useful information about the organization of the mitochondria in skin cells.

“The system allows us to obtain very high-resolution images of individual cells without having to slice the tissue physically,” explained Georgakoudi. “With this technique, we found that in normal cells the mitochondria are spread throughout the cell in a web-like pattern. Conversely, cancerous skin cells show a very different pattern with the mitochondria found in clumps or clusters typically at the center of the cell along the border of the nucleus.”

Georgakoudi estimates that this test could be routinely used in doctor’s offices within five years, although the $100,000 price tag for the laser used in this microscope could limit the medical facilities that would be able to make such an investment. “Less-expensive lasers are on the horizon,” concludes Georgakoudi. “However, this approach would enable a doctor to make a quick diagnosis and begin treatment immediately, which could ultimately lower health care costs associated with these very common cancers.”