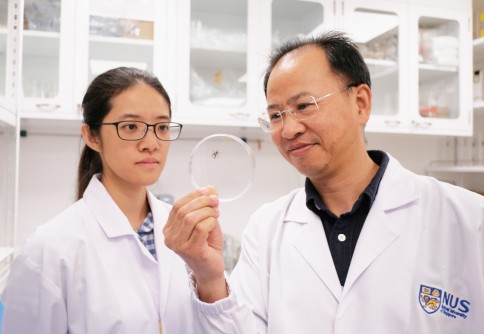 Associate Professor Li Daiqin (right) and Ms Chang Chia-chen (left) from the Department of Biological Sciences at NUS found that the personality of spiders determine their decision-making and hunting styles.

Newswise — Spiders, like humans and many other animals, have distinct personalities. Two studies by scientists from the National University of Singapore (NUS) unveiled interesting findings about the relationship between personality traits of spiders and their decision-making as well as hunting styles.

Studies have shown that when humans make decisions in a haste, they tend to make more mistakes. To investigate if the same holds true for spiders, the NUS research team, led by Associate Professor Li Daiqin from the Department of Biological Sciences at the NUS Faculty of Science, conducted studies on Portia labiata, a species of jumping spider. Portia labiata is known for its high cognitive ability and complicated foraging strategies, but its personality is unexplored.

The researchers first tested the aggressiveness of Portia labiata spiders by observing their responses when they are touched by a small soft brush. Spiders that attacked the brush were deemed to be more aggressive than those who ran away from the brush. After determining the personalities of the jumping spiders, researchers assessed how the spiders make decisions. In the experiments, the spiders were given the choice of selecting a large or a small preferred prey. The large prey is associated with being better in quality, but is more dangerous to attack. The small prey is of lower quality, but easier to attack. The researchers studied the time the spiders took to make their decision, and the choices they made.

The results showed that spiders who are aggressive made decisions faster than their docile counterparts. In addition, the choices they made are as accurate as those made by the docile spiders. The findings demonstrated that the personalities of the jumping spiders are related to their cognitive styles. Results of this study were reported in scientific journal Behavioral Ecology in December 2016.

Assoc Prof Li explained, “The outcome is rather surprising, as our team had initially thought that spiders that make quick decisions are more likely to make the wrong choices, similar to humans. This new knowledge provides us with a better understanding of ecological processes like foraging and predator-prey interactions in the animal kingdom.”

When predators hunt for food, they will usually consider the prey’s size, speed of movement, and strength. While the predator’s personality may not be ranked high on the list of factors, it has a significant influence on the predator’s hunting strategy, according to another study conducted by a research team led by Assoc Prof Li. The results were reported in scientific journal Scientific Reports in January 2017.

To test the aggressiveness of the predator, the researchers placed mirrors in front of the Portia labiata spiders, and observed their response to their images. Those that touched the mirror were deemed to be aggressive while those that kept far from the mirror were deemed to be docile. The researchers also assessed the boldness of the prey Cosmophasis umbratica by introducing a mock predator, made of putty and paper clips, into the container it resides, and observing the prey’s behaviour. Each test was repeated five times to estimate the predictability of the spiders’ behaviours, and to provide personality and predictability profiles of all the individuals studied. To determine the predator and prey interactions, the researchers placed a single predator and a single prey together to record the foraging performance of the predator. The test was conducted on different pairings, and the results were statically analysed.

Assoc Prof Li said, “Understanding personalities of spiders will shed light on how an individual animal with a particular behavioural type can improve its survivorship and reproduction. This has significant implications for evolutionary theories as a better understanding of non-animal personality may be extrapolated to humans, and help to provide a better understanding of the nature and evolution of human personalities. Furthermore, the study and management of animal personalities can play a crucial role in conservation, invasion biology and climate change.”

More studies on personalities of spiders