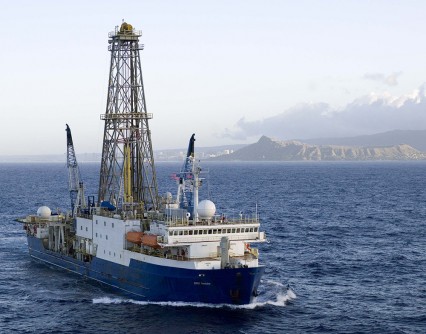 The JOIDES Resolution has found life in deepest ocean depths.

Evidence of oxygen-breathing microbial life has been found in places where scientists did not think life could exist – such as more than 200 feet below the ocean floor that is more than 12,000 feet below sea level in the Pacific Ocean – according to a team of international researchers that includes a Texas A&M University research scientist.

Carlos Alvarez-Zarikian, expedition project manager and staff scientist with the International Ocean Discovery Program (IODP) at Texas A&M, and other members of the international research team found oxygen and oxygen-breathing microbes all the way through the sediment from the seafloor to the igneous basement at seven sites in the South Pacific gyre, considered the “deadest” location in the ocean. Their findings contrast with previous discoveries that oxygen was absent from all but the top few feet of sediment in biologically productive regions of the ocean.

“Our objective was to understand the microbial community and microbial habitability of sediment in the deadest part of the ocean,” the researchers note, adding that “our results overturn a 60-year-old conclusion that the depth limit to life is in the sediment just meters below the seafloor in such regions. We found that there is no limit to life within this sediment. Oxygen and aerobic microbes hang in there all the way to the igneous basement, to at least 220 feet below the seafloor.”

For more, go to http://today.tamu.edu/2015/03/16/oxygen-aerobic-life-found-deep-beneath-the-ocean-floor-on-texas-am-drill-ship/