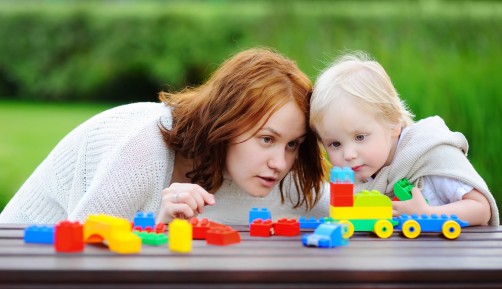 Newswise — University of Kansas researchers have found that certain specific parenting practices are significantly associated with the development of communication and language skills in children with Fragile X syndrome. These same parent behaviors are also associated with the growth of socialization and daily living skills of these children. Parenting even mitigated declines often reported in children with FXS beginning in middle childhood. Fragile X Syndrome is the leading genetic cause of autism and other intellectual disabilities.

“Our discovery of the impact of contingent maternal responsivity on child adaptive behavior development underscores the fact that the manifestation of FXS is not just the product of biology, but is ultimately attributable to the dynamic interaction of biology, behavior and environment over lengthy periods of time,” said Steven Warren, Distinguished Professor of Speech-Language-Hearing: Science & Disorders.

These parenting behaviors, collectively called maternal responsivity, were observed in a unique ongoing study of 55 children and their mothers in their homes, which followed the children from the ages of two to ten years and is continuing into adolescence.

The positive impact of sustained high levels of maternal responsivity from toddlerhood through middle childhood was true even for children with more autistic symptoms and lower nonverbal cognitive development levels.

The study focused on a set of specific behaviors by the mothers directed to the child such as: commenting on the child’s behavior and/or focus of attention; requesting a verbal response; and verbally “recoding” or restating and/or expanding what a child says. “Our researchers painstakingly coded each instance of maternal behavior toward their child, said Nancy Brady, associate professor of speech-language-hearing: science & disorders. This allowed us to discover that Mom’s behaviors, like responding to all communication, even nonverbal communication, has important implications down the road.”

Previously, the researchers reported that fifty-six percent of the children in the study showed declines in adaptive behavior at or before the age of ten, with an average age of seven years for the beginning of the decline, both in relation to their peers and in absolute terms. But the present analysis showed that these declines did not occur or were substantially less for children with highly responsive mothers.

These results may have important clinical and educational implications for children with FXS, said Brady. “We see no downside and potentially a considerable upside in training efforts aimed at enhancing and supporting sustained highly responsive parenting for children with FXS during both early and middle childhood.’

Fragile X occurs when a segment in the FMR1 gene on the X chromosome called the CGG triplet repeat is lengthened from the normal 5 to 40 repeats to 200 repeats in people with full mutation FXS. This inactivates the FMR1 gene and prevents the production of a protein crucial to neural development. But even those with fewer repeats—both males and female carriers—are at risk for certain disorders later in life. Female carriers of the mutation in the FMR1 gene often develop some symptoms of the disorder such as anxiety and depression that sometimes increase over time, said Warren.

In an earlier study, Brady and Warren found that vocabulary growth in children with FXS was linked to mothers who displayed greater early and sustained responsivity up until their children reached the age of nine. Again, this was not dependent on the child’s nonverbal IQ, autism symptoms or the education level of the mother but showed the unique contribution of maternal responsivity.

“There is no doubt that parenting plays a dynamic, cumulative role in human development in concert with biology and other environmental forces,” said Warren. “Our ability to understand these effects is greatly enhanced by long term longitudinal studies that allow us to observe how these forces interact across development. Ultimately the knowledge gained from these studies should pave the way for increasingly effective interventions and treatments.”

Kandace Fleming, associate scientist at the University of Kansas Life Span Institute, and Laura Hahn, assistant professor of speech & hearing science at the University of Illinois at Urbana-Champaign, were collaborators on the study, which was published in the January 10 issue of the Journal of Autism and Development Disorders.