Plant’s Recycling System Important in Sickness and in Health 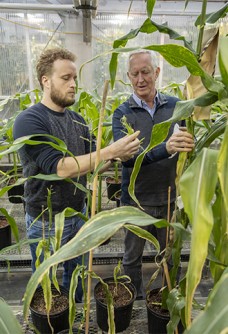 A plant relies on cellular machinery to recycle materials during times of stress, but that same machinery has a remarkable influence on the plant’s metabolism even under healthy growing conditions, according to new research from Washington University in St. Louis.

Autophagy is a process that helps to break down damaged or unwanted pieces of a cell so that the building blocks can be used again. In humans, autophagy is connected to a number of crippling diseases. In plants, it’s often associated with aging, or a response to nutrient starvation.

In a new publication in the journal Nature Plants, researchers led by Richard Vierstra, the George and Charmaine Mallinckrodt Professor of Biology in Arts & Sciences, describe the effects of autophagy on metabolism in maize (commonly referred to as corn) plants using a uniquely comprehensive set of modern “-omics” technologies.

“Maize is a very important crop, and is very sensitive to nitrogen deprivation,” Vierstra said. “One of the largest costs to growing maize in terms of energy, expenditures and a farmer’s time is providing adequate nitrogen to fertilize the soil. Consequently, we were particularly interested in how autophagy plays a role in nitrogen distribution and growth under nitrogen-limiting conditions.”

It turns out that maize plants lacking a key gene for autophagy are profoundly different at a molecular level — even if they’re getting enough nutrients and appear to develop normally.

“This is the first report describing the effect of autophagy using four different ‘-omics’ approaches and successfully integrating them into a complete picture,” said Fionn McLoughlin, a postdoctoral researcher in Vierstra’s lab and first author of the new paper.

The group used state-of-the-art tools to compare and analyze the transcriptome, proteome, metabolome and ionome of maize seedlings grown with or without the autophagy-related gene ATG12, and fertilized with or without nitrogen.

“This integration allowed us to pinpoint cellular processes that are affected by autophagy,” McLoughlin said. “By comparing changes in transcript and protein abundances among the samples, we could also determine which proteins were either differentially synthesized or targeted for turnover (recycling) by autophagy.”

Once considered an undiscriminating, bulk recycling system, autophagy now is discovered to be highly selective. Only certain parts of the cell are specifically recognized and reused.

This new research helps identify the “targets” for recycling, and also demonstrates the ways in which plants that lack genes for autophagy are not able to maintain several basic cellular functions.

“Most profoundly, we observed a dramatic increase in lipid breakdown products, together with changes in secondary metabolism in the mutants, and revealed an unanticipated role of autophagy in protein homeostasis,” McLoughlin said. “To our surprise, as much as 25 percent of the maize proteome is influenced by autophagy, even under non-starvation conditions.”

The large, useful “-omics” datasets the researchers produced are published in the paper and can be mined by other scientists to help to develop marker metabolites/proteins that might be used to monitor the nutritional status of the plants in the field.

“Autophagy has a tremendous impact on a multitude of cellular processes that could be exploited to modify the content of lipids, oils, secondary metabolites and proteins for agronomic benefit,” McLoughlin said.