Plastic Below the Surface

Current measurement methods may be vastly underestimating the amount of plastic in the oceans. 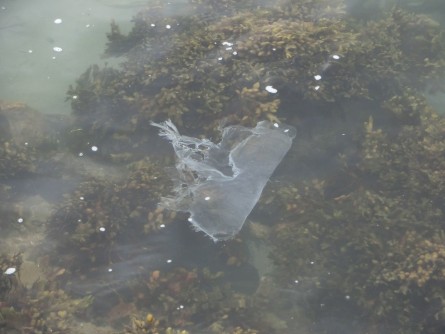 Current measurement methods skim the surface of the ocean while computer modeling shows ocean turbulence may force plastics far below the surface despite their buoyancy.

Newswise — Plastics are all around us. They are found in containers and packing materials, children’s toys, medical devices and electronics.

Unfortunately, plastics are also found in the ocean.

A 2015 paper published in Science estimates that anywhere from 4.8 million to 12.7 million metric tons of plastic were dumped into the ocean in 2010 alone. One metric ton equals approximately 2,200 pounds, roughly the weight of a Mazda Miata.

As we celebrate Earth Day on Friday, April 22, new research by University of Delaware physical oceanographer Tobias Kukulka provides evidence that the amount of plastic in the marine environment may be greater that previously thought.Troubling tiny travelers

Plastic in the ocean becomes brittle over time and breaks into tiny fragments. Slightly buoyant, these microplastics often drift at the surface where they can be mistaken for food by birds, fish or other marine wildlife. Microplastics have turned up in the deep ocean and in Arctic ice, too.

“You have stuff that’s potentially poisonous in the ocean and there is some indication that it’s harmful to the environment, but scientists don’t really understand the scope of this problem yet,” explains Kukulka, an expert on ocean waves and currents, and associate professor in the College of Earth, Ocean, and Environment’s School of Marine Science and Policy.

One technique scientists use to try and quantify how much plastic is in the marine environment is to drag a tow net over the surface for a few miles, then count the number of plastic fragments. This number is then used to calculate a concentration considered representative of the amount of plastic in the area.

But Kukulka isn’t so sure this method provides an accurate picture of what’s happening.

“My research has shown that ocean turbulence actually mixes plastics and other pollutants down into the water column despite their buoyancy,” Kukulka said. “This means that surface measurements could be wildly off and the concentration of plastic in the marine environment may be significantly higher than we thought.”

In the ocean, wind and waves act like a spoon, generating turbulence and mixing this surface layer of the water.

Working with collaborators at Woods Hole Oceanographic Institute and University of Washington, Kukulka used computer modeling to look at the effect that waves, and heating or cooling the ocean surface, had on where in the water plastic was found.

The study findings provided evidence that turbulence from waves and currents plays a critical role in whether plastics stay at the surface or get mixed deeper into the ocean. Surface heating from the atmosphere, due to seasonality, latitude or night/day cycles, also had a significant effect.

In the summer, for example, strong surface heating by the sun warms up the ocean’s top layer, decreasing the water’s density and trapping the plastic at the surface. When the surface cooled, the water density increased and caused the plastic to sink into the water column.

“If we really want to go after this problem and quantify the amount of plastics in the ocean and think about distribution and impact, then we need to keep in mind that turbulence is influenced by heating and, therefore, the distribution of plastics is too,” Kukulka said.

While the research team’s findings shed new light on the growing plastics problem, Kukulka said the research also can be applied to oil and other pollutants, even to the distribution of nutrients in the water and phytoplankton, ocean drifters that form the base of the marine food web.

“Broadly, these plastics pieces can be used as a physical tracer to help answer bigger questions about ocean processes and their implications for other ocean pollutants,” he said.

While some scientists have suggested dragging nets through ocean’s surface waters to remove the plastic, Kukulka cautions that in areas with strong turbulence scientists “may want to consider spending our energy and efforts elsewhere.”

“Even though the plastic pieces are buoyant, cleanup might not be as simple as skimming the surface,” he said.

The scientists reported their findings in the March issue of the Journal of Physical Oceanography, a publication of the American Meteorological Society. Co-authors on the work, titled “Evidence for the Influence of Surface Heat Fluxes on Turbulent Mixing of Mircoplastic Marine Debris,” include Kara L. Law, a sea education associate with Woods Hole and Giora Proskurowski, a research scientist at University of Washington.

This work was supported by the U.S. National Science Foundation (Grant OCE-1352422).