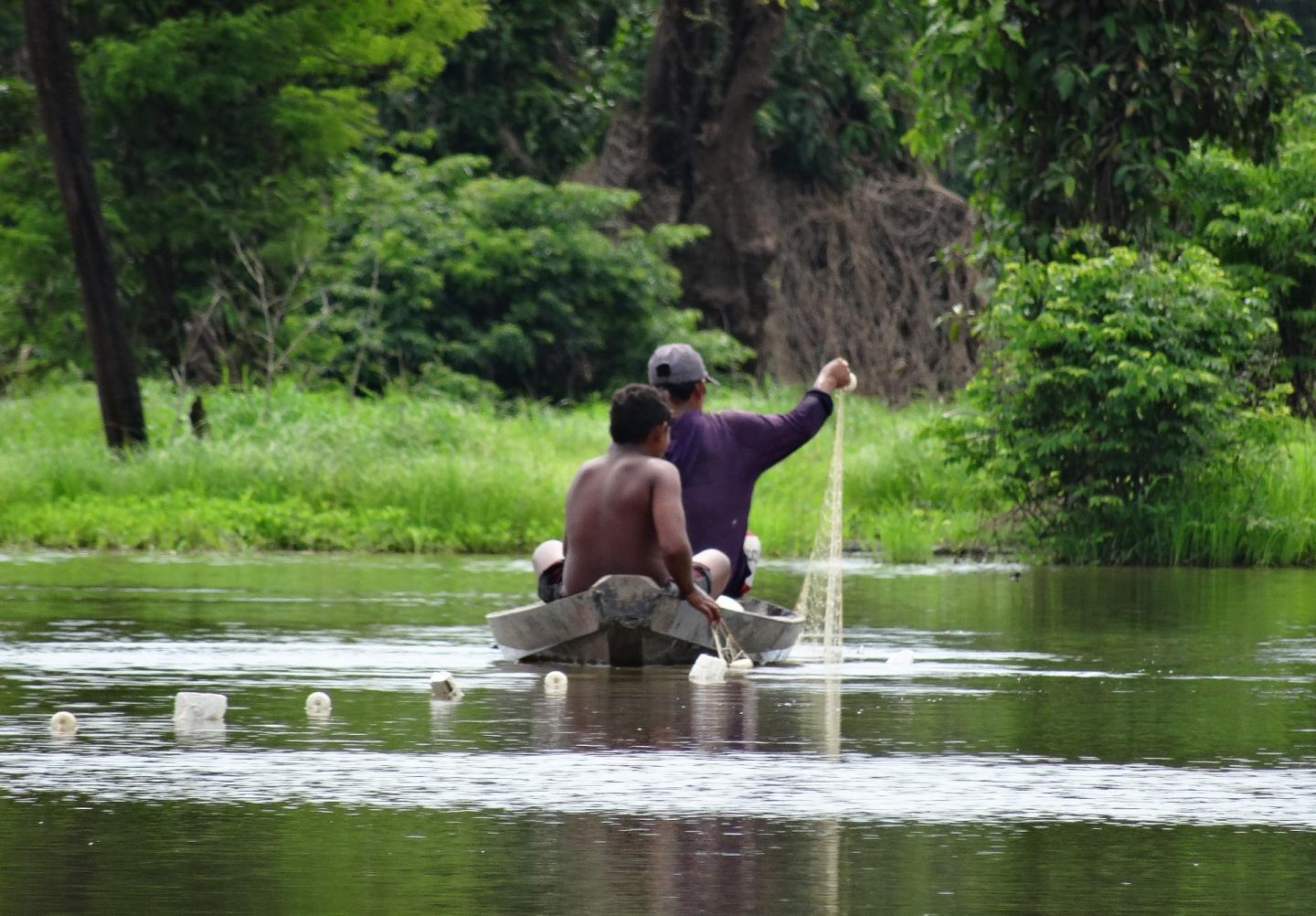 Fishing for the world's largest freshwater scaled fish, pirarucu (Arapaima gigas), in a lake beside the River Purus. 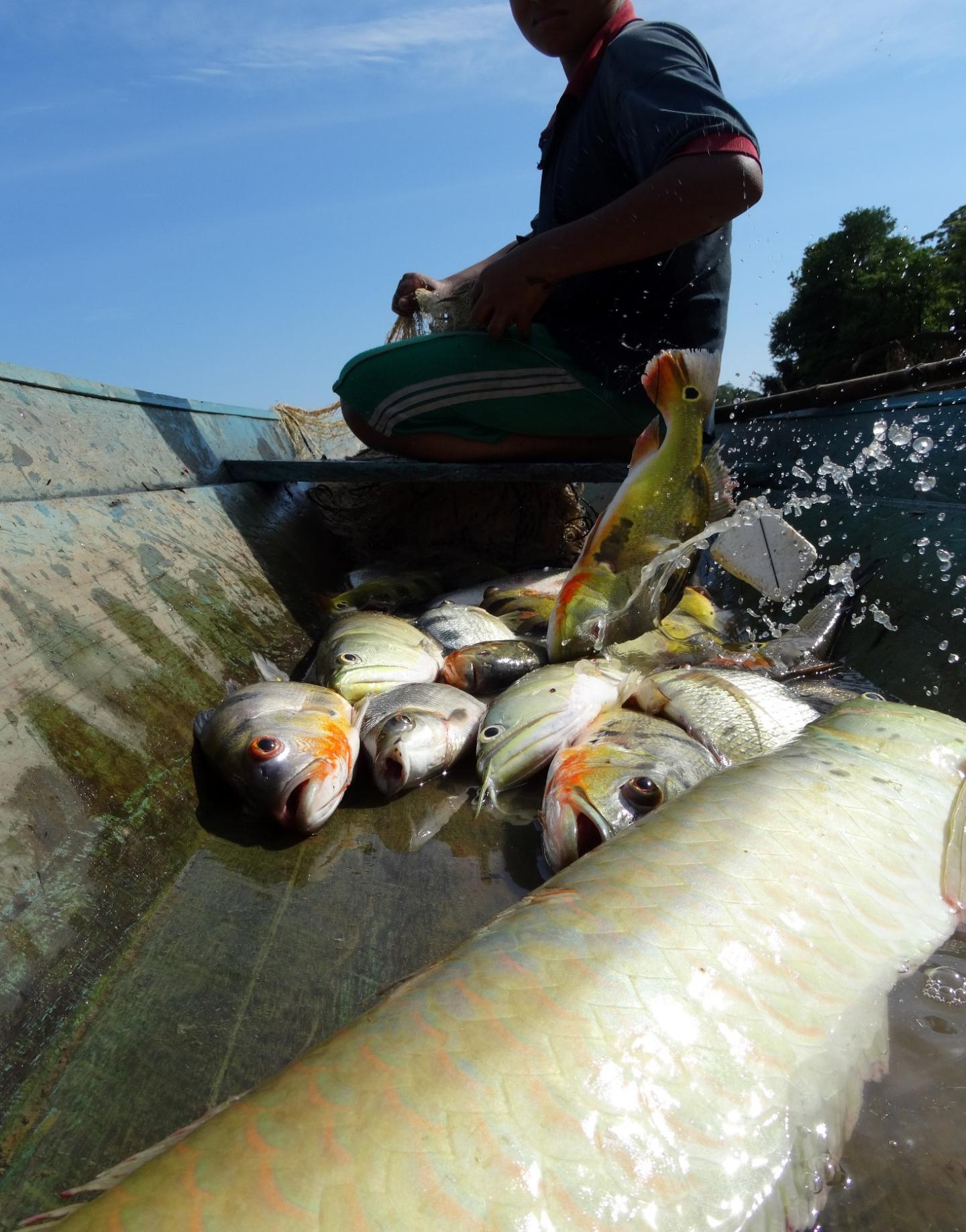 A fish's eye view of today's catch from inside the canoe on a lake beside the River Purus during the low water season. 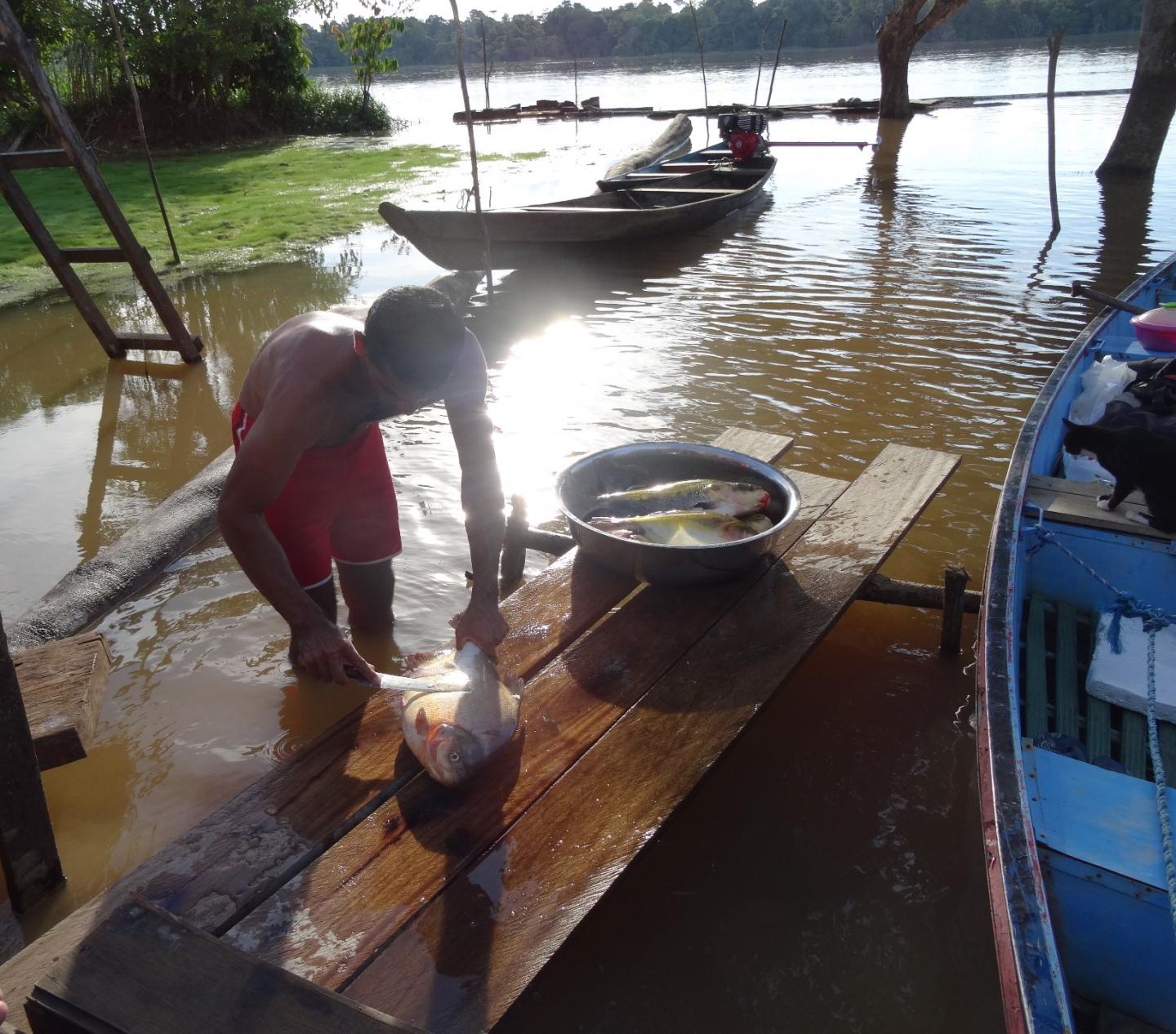 Newswise — Poorer rural Amazonians are going hungry despite living in one of the most biodiverse areas on the planet - a new study reveals.

Massive seasonal floods mean many ribeirinhos, a marginalised social group who live alongside rivers in Brazil's Amazonian floodplain forests, struggle to catch enough fish to eat and can go hungry.

The Purus River, which flows towards the regional capital city of Manaus, undergoes one of the largest annual variations in water levels on the planet. When it floods, large areas of forest become submerged. River fish populations disperse making them much harder to catch.

The difficulty in catching fish during the floods might partially explain widespread malnutrition among vulnerable Amazonians, having serious lifelong health consequences, especially when affecting pregnant women and young children.

Today, a team of scientists from Brazil and the UK are publishing the results of the first study linking food security for wildlife-dependent people in the Amazon with 'catch rates' - which is the amount of fish caught for each hour spent fishing.

Largely invisible to many policy makers and wider Brazilian society, the ribeirinhos, are some of the poorest people in Brazil, living in small communities dispersed over thousands of kilometres along Amazonian river systems. They often live far away from shops and lack electricity, refrigeration, or the ability to keep livestock. Therefore, ribeirinhos obtain a large proportion of their calories, macronutrients and micronutrients from catching fish.

Despite their increased efforts fish catches fall by around half with catch rates reduced by 73 per cent.

This reduced food security during floods means families are forced to go without food for whole days, skip meals, or eat smaller portions.

Daniel Tregidgo, of the Federal University of Lavras in Brazil and Lancaster University in the UK is lead author on the study. He said: "The study highlights how the food security of marginalised rural communities living in a biologically rich area relies heavily on the stable supply of wildlife. Seasonal floods bring severe food insecurity among wildlife-reliant people by disrupting that supply despite being in an area of great natural wealth.

"This high prevalence of food insecurity seems paradoxical for Amazonian várzea forests which are biologically rich and have low human population densities but the population is highly dependent on this seasonally-transformed ecosystem.

"This study's findings indicates that we may be overlooking food instability in areas around the world where people are reliant on wildlife for food. This instability is potentially very common and dangerous for human health."

Researchers found that ribeirinhos also try to make up for their reduced fish catches by spending more time and effort hunting for bushmeat in the forests.

Paulo Pompeu from the Federal University of Lavras explains the potential implications of these findings across the Amazon: "Because the Amazon basin is experiencing a boom in construction of hydropower dams, such a major threat to fish stocks could lead to an increase in hunting pressure on land animals."

The findings that ribeirinhos both fish and hunt more when food security is reduced shows just how much they rely on wildlife.

The authors say that this evidence shows how effective management of river and forest wildlife populations is vital to ensure that remote rural communities can feed themselves in the high water season. Management of commercial fishing is particularly important, and the authors' previous research showed that fish stocks in the forest can be depleted by meeting the demand from large Amazonian cities, up to 1,000km away.

The study also found food insecurity hits the poorest hardest. Only the least-poor minority of ribeirinhos are able to protect themselves from seasonal food scarcity.

Researchers say the results show that the solution to food insecurity in the high water season is poverty alleviation for rural households. This raises important policy debates, particularly around welfare and fishing closed-season payments. They say that reliable provision of school meals in rural areas will also help support the diets of children in vulnerable households during times of low fish catches.

The researchers interviewed residents from 22 rural communities at least 13km apart from each other covering a distance along the river of 1,267km.

The findings are presented in the paper 'Tough fishing and severe seasonal food insecurity in Amazonian flooded forests' which has been published in the journal People and Nature.

Caption: Fishing for the world's largest freshwater scaled fish, pirarucu (Arapaima gigas), in a lake beside the River Purus.

Caption: A fish's eye view of today's catch from inside the canoe on a lake beside the River Purus during the low water season.