iCeMS scientists have revealed how a transporter protein twists and squeezes compounds out of cells, including chemotherapy drugs from some cancer cells

The ABCB1 protein squeezes fat-soluble compounds out of the cell through a major twist in the protein structure. 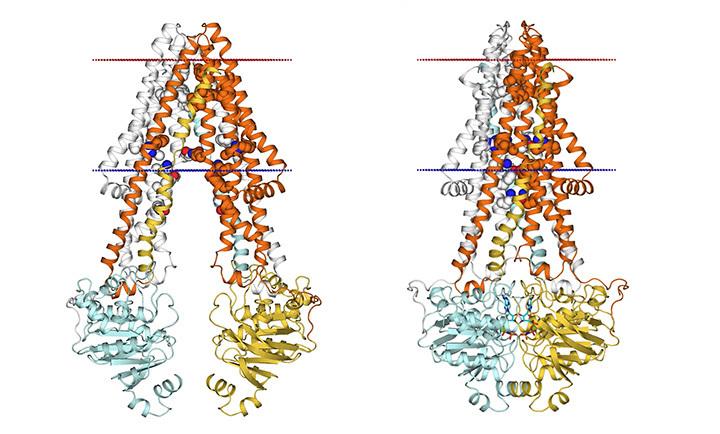 The ABCB1 protein squeezes fat-soluble compounds out of the cell through a major twist in the protein structure.

Newswise — In 1986, cellular biochemist Kazumitsu Ueda, currently at Kyoto University's Institute for Integrated Cell-Material Sciences (iCeMS), discovered that a protein called ABCB1 could transport multiple chemotherapeutics out of some cancer cells, making them resistant to treatment. How it did this has remained a mystery for the past 35 years. Now, his team has published a review in the journal FEBS Letters, summarizing what they have learned following years of research on this and other ATP-binding cassette (ABC) transporter proteins.

ABC transporter proteins are very similar across species and have various transportation roles: importing nutrients into cells, exporting toxic compounds outside them, and regulating lipid concentrations within cell membranes.

ABCB1 is one of these proteins, and is responsible for exporting toxic compounds out of the cell in vital organs such as the brain, testes, and placenta. Sometimes, though, it can also export chemotherapeutic drugs from cancer cells, making them resistant to treatment. The protein lies across the cell membrane, with one end reaching into the cell and the other poking out into the surrounding space. Even though scientists have known its roles and structure for years, exactly how it functions has been unclear.

Ueda and his team crystalized the ABCB1 protein before and after it exported a compound. They then conducted X-ray tests to determine the differences between the two structures. They also conducted analyses using ABCB1 fused with fluorescent proteins to monitor the conformational changes during transport.

They found that compounds destined for export access ABCB1's cavity through a gate in the part of the protein lying inside of the cell membrane. The compound rests at the top of the cavity, where it attaches to molecules, triggering a structural change in the protein. This change requires energy, which is derived from the energy-carrying molecule adenosine triphosphate (ATP). When magnesium ions bind to ATP, the part of ABCB1 inside the cell packs tightly in on itself and tilts, causing its cavity to shrink and then close. This opens the protein's exit gate. ATP is also involved in making ABCB1 progressively rigid from its bottom to its top, leading to a twist and squeeze motion that expels the compound into the extracellular space.

"This mechanism is distinct from those of other transporter proteins," says Ueda. "We expect our work will facilitate the study of other ABC proteins, such as those involved in cholesterol homeostasis."

At iCeMS, our mission is to explore the secrets of life by creating compounds to control cells, and further down the road to create life-inspired materials.
https://www.icems.kyoto-u.ac.jp/