For agricultural nitrogen, slow it down, buff it out 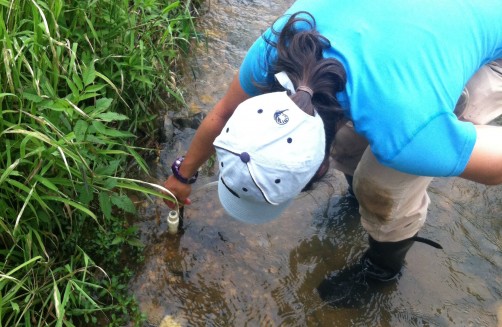 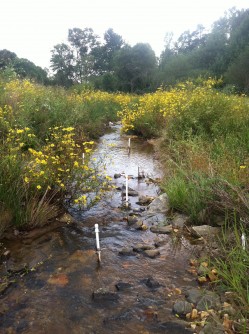 Researchers measured nitrogen removal capacity in this restored stream next to an agricultural area. 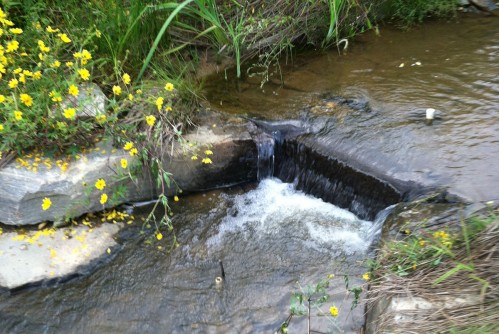 In-stream nitrogen removal was not as good below this cross-vane structure. However, the reconnected floodplain was an area with high microbial activity and greater ability to remove nutrients.

Newswise — Sept. 27, 2017 - Nitrogen can present a dilemma for farmers and land managers.

On one hand, it is an essential nutrient for crops.

However, excess nitrogen in fertilizers can enter groundwater and pollute aquatic systems. This nitrogen, usually in the form of nitrate, can cause algal blooms. Microbes that decompose these algae can ultimately remove oxygen from water bodies, causing dead zones and fish kills.

In a new study, researchers have identified nitrate removal hotspots in landscapes around agricultural streams.

“Understanding where nitrate removal is highest can inform management of agricultural streams,” says Molly Welsh, lead author of the study. “This information can help us improve water quality more effectively.”

Welsh is a graduate student at the State University of New York College of Environmental Science and Forestry. She studied four streams in northwestern North Carolina. The streams showed a range of degradation and restoration activity. One of the streams had been restored. Two others were next to agricultural lands. The fourth site had agricultural activity in an upstream area.

The researchers analyzed water and sediment samples from the streams. They also analyzed soil samples from buffer zones next to the streams. Buffer zones are strips of land between an agricultural field and the stream. They often include native plants. Previous research showed they are particularly effective at absorbing and removing nitrate.

Within these buffer zones, nitrate removal hotspots occurred in low-lying areas. These hotspots had fine-textured soils, abundant soil organic matter, and lots of moisture. The same was true in streams. Nitrate removal was highest in pools where water collected for long times. These pools tended to have fine sediments and high levels of organic matter. However, pools created during stream restoration by installing channel-spanning rocks did not show high levels of nitrate removal. Creating pools using woody debris from trees may be more effective than rock structures for in-stream nitrogen removal.

“Our results show that it may be possible to develop simple models to guide nitrogen management,” says Welsh. “However, more work is needed in terms of gathering and evaluating data. Then we can find the best parameters to include in these models.”

Welsh continues to study how stream restoration influences the movement of water and nitrate removal. She is also examining how steps to increase nitrate removal influence other aspects of landscape management.

Read more about Welsh’s work in Journal of Environmental Quality.

Funding was provided by the United States Department of Agriculture - National Institute of Food and Agriculture’s Agriculture and Food Research Initiative and the National Science Foundation’s Graduate Research Fellowship.