Research Team Finds How CBD, a Component in Marijuana, Works Within Cells 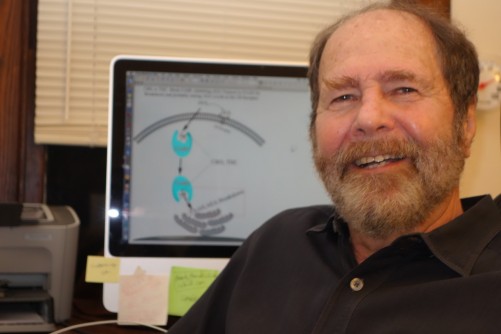 Newswise — STONY BROOK, N.Y., February 11, 2015 – A team of Stony Brook University researchers have identified fatty acid binding proteins (FABPs) as intracellular transporters for two ingredients in marijuana, THC and CBD (cannabidiol). The finding, published early online in the Journal of Biological Chemistry, is significant because it helps explain how CBD works within the cells. Recent clinical findings have shown that CBD may help reduce seizures and could be a potential new medicine to treat pediatric treatment-resistant epilepsy.

CBD differs from THC in that it is not psychoactive and does not bind to cannabinoid receptors. Some children who are resistant to conventional antiepileptic drugs have been reported to show improvement with oral CBD treatment. The Stony Brook research team found that three brain FABPs carry THC and CBD from the cell membrane to the interior of the cell. This action enabled them to conduct experiments inhibiting FABPs and thereby reducing anandamide breakdown inside the cells. “Anandamide, an endocannabinoid, has been shown to have neuroprotective effects against seizures in basic research studies and this may turn out to be a key mechanism of seizure control,” explained Dale Deutsch, PhD, Professor of Biochemistry and Cell Biology and a faculty member of the Institute of Chemical Biology and Drug Discovery at Stony Brook University. “Therefore by CBD inhibiting FABPs, we could potentially raise the levels of anandamide in the brain’s synapses.” The findings in the paper, titled “Fatty Acid Binding Proteins are Intracellular Carriers for THC and CBD,” stem from the team’s research that spans five years and includes their discoveries that showed anandamide levels were raised in rodent brains using novel drugs targeted to FABPs. In 2013, they received a $3.8 million grant from the National Institute on Drug Abuse, part of the National Institutes of Health (NIH), to target endocannabinoid transporters to develop drugs for pain and inflammation. The current research involving FABPs as transporters of CBD involves the work of faculty and students from several Stony Brook Departments. The team includes four Professors – Dr. Deutsch, Martin Kaczocha (Anesthesiology), Iwao Ojima (Chemistry and the Institute of Chemical Biology and Drug Discovery), and Stella Tsirka (Pharmacological Sciences). The team also features a post-doctoral fellow (Jeremy Miyauchi in Pharmacological Sciences), a researcher who recently received his PhD (William Berger in Chemistry), a graduate student Matthew Elmes, a research technician Liqun Wang, and undergraduate students Brian Ralph, Kwan-Knok Leung, and Joseph Sweeney, all from the Department of Biochemistry and Cell Biology.