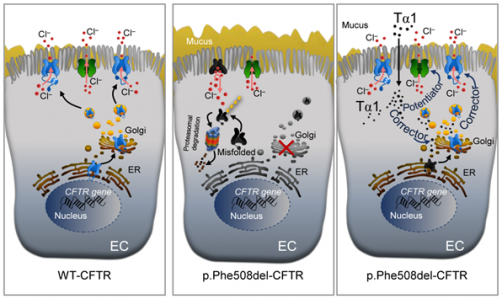 Allan L. Goldstein, Ph.D., co-author of the paper and Professor Emeritus in Residence of Biochemistry and Molecular Medicine at the George Washington University School of Medicine and Health Sciences, speaks about his research finding a potential new treatment option for cystic fibrosis patients, which may not not only correct genetic and tissue defects, but also significantly reduce inflammation.

Newswise — WASHINGTON (April 10, 2017) — Researchers from the George Washington University (GW), the University of Perugia, and the University of Rome have discovered a potential new drug to treat and stop the progression of cystic fibrosis. Thymosin α1 (Tα1) is a novel therapeutic single molecule-based therapy that not only corrects genetic and tissue defects, but also significantly reduces inflammation seen in cystic fibrosis patients.

“Right now there are multiple treatments for cystic fibrosis, and while these have improved life expectancy dramatically, there is still only a lifespan of about 40 years for patients. No one treatment can stand alone,” said Allan L. Goldstein, Ph.D., co-author of the paper and Professor Emeritus in Residence of Biochemistry and Molecular Medicine at the GW School of Medicine and Health Sciences. “We developed a single treatment that can potentially correct the genetic defect that causes cystic fibrosis and decrease the inflammation that happens as a result.”

Cystic fibrosis is a genetic disease that causes persistent lung infections and limits the ability to breathe over time, and it affects approximately 70,000 worldwide and 30,000 in the U.S. alone. Cystic fibrosis is the result of mutations in the gene encoding the protein called the cystic fibrosis transmembrane conductance regulator (CFTR), which is important to maintain chloride-channel activity affecting the salt and water balance in the lungs. This mutation results in a misfolded CFTR protein, and its premature degradation leads to impaired chloride permeability and persistent lung inflammation.

Goldstein and co-authors Luigina Romani, Ph.D., M.D., at the University of Perugia and Enrico Garaci, M.D., at the University of Rome "San Raffaele,” both in Italy, published their results in Nature Medicine. They report that Tα1, a synthetic version of a naturally occurring peptide first isolated from the thymus, corrects the multiple tissue defects found in the lungs and small intestines in a mouse model of cystic fibrosis, as well as the defects in the CFTR seen in cells isolated from cystic fibrosis patients. Tα1 not only significantly reduces the inflammation seen in cystic fibrosis, but also increases CFTR maturation, stability, and activity. Due to this two-pronged action, Tα1 offers a strong potential to be a single-molecule therapeutic agent to treat and stop the progression of cystic fibrosis.

Goldstein and colleagues first isolated and characterized Tα1 as a biological response modifier with potent immune therapeutic activity in 1979. This research was done in large part at GW. Although the peptide is produced in small amounts in several peripheral lymphoid and non-lymphoid tissues, the highest concentrations of Tα1 are found in the thymus. Tα1, whose commercial name is Zadaxin, has been approved for clinical use for over 15 years in 35 countries in the treatment of patients with viral infections, immunodeficiency diseases, malignancies, and HIV/AIDS. Though not currently available in the U.S., it has an excellent safety profile and does not induce the side effects and toxicities commonly associated with most immunomodulatory agents.