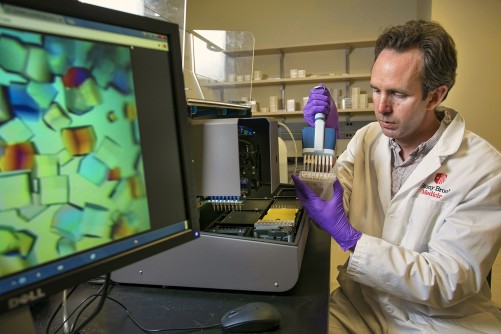 Mike Airola works with samples of a key enzyme, nSMase2, implicated in cancer and neurological diseases to determine its crystal structure. 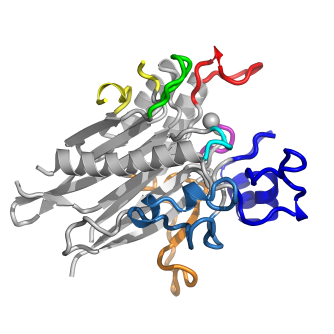 The different colors of this structural visualization of nSMase2 indicate parts of the enzyme that may change their shape when the protein is switched ‘on,’ encouraging cancer cells to spread.

Newswise — Stony Brook, NY – June 27, 2017 – A Stony Brook University-led team of researchers has determined the structure of a key enzyme involved with cell growth regulation in cancer and neurodegenerative diseases, including Alzheimer’s disease. The finding, published in PNAS, reveals the first visualization of the enzyme and could provide insight into how the enzyme is activated.

The enzyme, neutral sphingomyelinase (nSMase2), is one of the major enzymes that produces ceramide in the body. Ceramides are oil-like lipids that are produced in response to chemotherapy and other cell stresses. The ceramides that nSMase2 produces allow cancer cells to pass DNA and proteins to other cells to change their behavior. This plays a significant role in aiding the cancerous cells to spread into other regions as ceramides are produced. With this first visual of the structure of the enzyme, the researchers hope to understand how to de-activate the enzyme. Information on de-activating the enzyme could lead to a way to design cancer drugs that inhibit nSMase2.

“Our finding is promising because the way in which we determined the structure reveals an unexpected mechanism for how nSMase2 is activated to generate ceramide,” said Mike Airola, PhD, Assistant Professor of Biochemistry and Cell Biology and lead author. To obtain this structure, the researchers screened thousands of different samples to have this protein form very small crystals that could be captured visually via X-rays. These X-rays bounce off the protein, and based on the angle of movements they calculated what structure looks like.

Once they defined structure in this way, the research team made hypotheses as to how the shape of this important enzyme changes in order to be activated and then tested these hypotheses. Their findings suggested the same region that kept nSMase2 off was crucial for turning it on.

The researchers determined the enzyme consists of two parts: one that partitions inside the oil-like membrane and one that soluble in water. Their work with the structure revealed that to turn nSMase2 ‘on,’ these two parts come together to switch the enzyme from off to on. They found that by removing some of these parts, they were able to obtain a picture of the enzyme trapped in its ‘off’ state. Using the structure, Dr. Airola and colleagues added back different parts of the enzyme, and then they were able to turn it back on to its on, or activated state.

Dr. Airola explained that while much is known about the cellular functions of nSMase2, there is limited scientific knowledge into the molecular mechanisms regulating its activity. This latest research presents the crystal structure of the enzyme and enabled the researchers to understand its molecular mechanism to a level not known before.

The next step in their research is to get a picture of the enzyme in its activated ‘on’ state. They are also working to identify new scaffolds that could be used as drugs to inhibit this enzyme. Their long-term goal is to understand how this enzyme is turned on and stop it from working as potential therapeutic strategy.

The research was supported in part by the National institutes of Health. Some of the research was completed with access to the facilities at the Synchrotron Light Source and Brookhaven National Laboratory.

Stony Brook University is going beyond the expectations of what today’s public universities can accomplish. Since its founding in 1957, this young university has grown to become one of only four University Center campuses in the State University of New York (SUNY) system with more than 25,700 students, 2,500 faculty members, and 20 NCAA Division I athletic programs. Our faculty have earned numerous prestigious awards, including the Nobel Prize, Pulitzer Prize, Indianapolis Prize for animal conservation, Abel Prize and the inaugural Breakthrough Prize in Mathematics. The University offers students an elite education with an outstanding return on investment: U.S.News & World Report ranks Stony Brook among the top 40 public universities in the nation. Its membership in the Association of American Universities (AAU) places Stony Brook among the top 62 research institutions in North America. As part of the management team of Brookhaven National Laboratory, the University joins a prestigious group of universities that have a role in running federal R&D labs. Stony Brook University is a driving force in the region’s economy, generating nearly 60,000 jobs and an annual economic impact of $4.65 billion. Our state, country and world demand ambitious ideas, imaginative solutions and exceptional leadership to forge a better future for all. The students, alumni, researchers and faculty of Stony Brook University are prepared to meet this challenge.