Postdoctoral researchers Muhan Chen, Dawid G. Nowak and others in the Trotman lab at CSHL may have solved a mystery about prostate cancer: why some patients appear to have low levels of the powerful tumor-suppressing protein PTEN and yet have no mutations in the gene that encodes the protein. The answer is implied in this image. In a sample of mouse prostate tissue on the way to becoming cancerous, they show one area in which PTEN protein levels are high (Area 1, yellow dashes) and a nearby area (Area 2, red dashes) where they are low. Where PTEN is low, so are levels of a protein called Importin 11 (Ipo11); where PTEN is abundant, so too is Ipo11. Ipo11 saves PTEN proteins marked for destruction by carrying them into the cell nucleus, perhaps in this way forming a "reservoir" and saving PTEN for future use in the battle against the emerging tumor. When Ipo11 is missing, cancer progression is promoted. 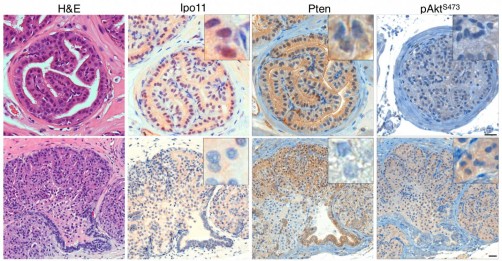 Cross sections of prostate tissue in healthy mice (top row) and mice in which cancer is beginning to develop (bottom row). Healthy tissue shows regular structures and empty spaces (white in the far left image) called lumen. Cancerous tissue is less organized, and is more densely populated with cells, which are proliferating abnormally. Insets show consistently that when Ipo11 is abundant, so is PTEN tumor-suppressing protein; when PTEN levels are low, so is the protein Importin 11 (Ipo11). Its presence of absence may be a useful diagnostic and therapeutic marker in prostate biopsies.

Newswise — Cold Spring Harbor, NY -- Researchers at Cold Spring Harbor Laboratory (CSHL) have discovered that a protein called Importin-11 protects the anti-cancer protein PTEN from destruction by transporting it into the cell nucleus. A study they publish today in The Journal of Cell Biology suggests that the loss of Importin-11 may destabilize PTEN, leading to the development of lung, prostate, and other cancers.

PTEN prevents tumor cells from growing uncontrollably, and mutations in the gene encoding this protein are commonly found in many different types of cancer. Some patients, however, show low levels of the PTEN protein even though their PTEN genes are normal. CSHL Associate Professor Lloyd Trotman and colleagues discovered that this may be due to defects in Importin-11, which transports PTEN into the nucleus, sheltering PTEN from proteins in the cell's cytoplasm that would otherwise target it for degradation.

Several cytoplasmic proteins -- NEDD4-1, NDFIP1, and UBE2E1 -- combine to tag PTEN with the small molecule ubiquitin. PTEN tagged with multiple ubiquitin molecules can then be recognized and destroyed by the cell's protein degradation machinery. Trotman and colleagues found that Importin-11 protects PTEN from degradation by escorting not only PTEN but also UBE2E1 into the nucleus, thereby breaking up the cytoplasmic ubiquitination apparatus.

Founded in 1890, Cold Spring Harbor Laboratory has shaped contemporary biomedical research and education with programs in cancer, neuroscience, plant biology and quantitative biology. Home to eight Nobel Prize winners, the private, not-for-profit Laboratory employs 1,100 people including 600 scientists, students and technicians. The Meetings & Courses Program hosts more than 12,000 scientists from around the world each year on its campuses in Long Island and in Suzhou, China. The Laboratory's education arm also includes an academic publishing house, a graduate school and programs for middle and high school students and teachers. For more information, visit http://www.cshl.edu