Mice hammer a rare native plant by feasting on its seeds, but their spoilation is human-enabled 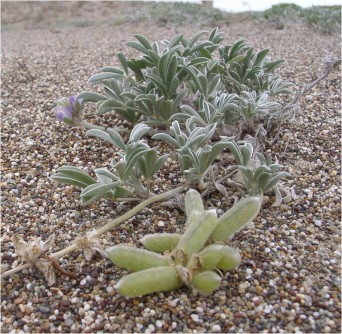 The rare Tidestrom's lupine rests its plump seed pods gracefully on the sand. This reclining habit helps the plant survive high winds and frequent dune blow-outs but makes it vulnerable to foraging mice. 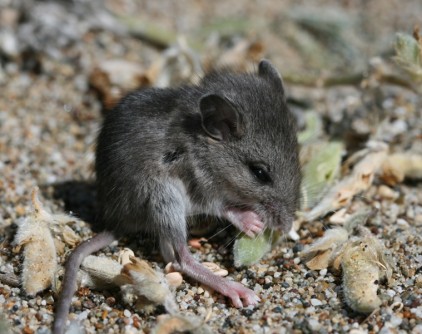 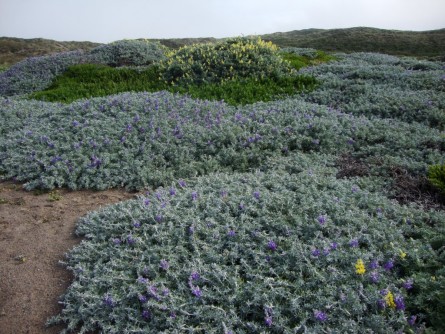 The common Chamisso bush lupine holds its seed pods above the ground or hides them in the middle of its shrubbery. This lupine's architecture makes its seeds less vulnerable to predation while they remain on the plant.

Newswise — What bothers a plant? Why are some plants rare while others are common? Are the rare plants simply adapted to rare habitat or are they losing the competition for habitat? Are their populations small but stable, or are they dwindling?

And how can scientists usefully frame these questions when there are so many possible variables?

One way is to compare related — or congeneric — species that have many traits in common but also differ in some ways. This clears out enough underbrush that carefully designed experiments can provide answers.

A four-year study of two congeneric lupines, one rare and one common species, growing in the dunes near Abbotts Lagoon in Point Reyes National Seashore in California has yielded a possible clue about factors leading to rarity. The study, by current and former faculty of Washington University in St. Louis, appears online in the March 21 issue of the American Journal of Botany.

The rare lupine is being pillaged by a native mouse that steals most of the seed pods while they are still attached to the plant. Mice favor the large, delicious seeds of the common species after the seeds fall, but the rare lupine still loses far more seeds than the common one.

"The message of the paper is that you need to consider both, and that when you do, the rare species still experiences more seed loss than the common species," said Eleanor Pardini, assistant director of the environmental studies program in Arts & Sciences at Washington University. So seed predation can be a powerful filter that shapes the composition of plant communities.

But the story is not simply that mice eat seeds. The mice also are a "subsidized" species, given a competitive advantage by human activity. European beachgrass (Ammophila arenaria), originally planted to stabilize the dunes, has had the unintentional side effect of giving the mice cover for nocturnal forays among the lupines.

Since the beachgrass near the richest patch of lupines was removed in 2011, the rare lupine is rebounding and the dune ecosystem — perhaps — is recovering its previous equilibrium sans mice.

Not as obvious as it seemsNaively, it would seem that seed loss must always be bad for plants. But enduring such a predatory attack is only one factor among many feeding into the complex equation that determines the plant's competitive fitness.

"Studies that have looked at seed predation in congeneric plant systems have had mixed results, " Pardini said. "Some found that rare species experience higher predation than their common congeners, and others found the reverse."

Pardini and her co-author, Tiffany Knight, former director of the Washington University environmental studies program, now a professor at the Helmholtz Center for Environmental Research in Leipzig, Germany, suspected the results were confusing because scientists had looked at only one part of a plants' life cycle or for too short a time.

Predation while the seeds were still on the plant (predispersal) and predation after the seeds had fallen from the plant (post dispersal) might offset one another, Pardini said. If predispersal predation is low, the larger patches of dispersed seeds could then be attractive to predators, increasing postdispersal seed predation.

The two species in the Marin County study are the rare Tidestrom's lupine (Lupinus tidestromii), a prostrate herb that grows along the sand, and the common Chamisso bush lupine (Lupinus chaissonis), a shrub that can grow 6 feet tall and holds its pods arched upward and high off the ground.

The scientists measured both predisperal and postdispersal seed predation over a period of four years, as well as proximity to European beachgrass (that could provide cover which would make foraging less dangerous). They also measured postdispersal seed density, which might alter the risks predators would take.

Midway through the study, in 2011, the U. S. Park Service removed the beachgrass from 2.5 acres of dunes near the lupine refuge, altering one variable in the study — to interesting effect.

The beachgrass had a lot to do with this. If a Chamisso bush lupine and a Tidestrom's lupine were near beachgrass (and mice) the Chamisso lost far fewer of its seeds to mice because of its shrubby architecture. Farther from the beachgrass the difference was less great but, still, fewer of the bush lupine's seeds were eaten.

The removal of beachgrass has already taken the pressure off the rare lupine. There are two reasons for this, Pardini said. One is that Tidestrom's lupine is adapted to a disturbed habitat and needs wind and dune blowouts to thrive. The second is that with the beachgrass gone, mice have to take bigger risks to take lupine seeds.

"Tidestrom's lupine is popping up like crazy in the restored areas," Pardini said. "The seed germination rate is very high, survival rate is extremely high, it's reaching high densities in the restored zones, the plants are huge and they're extremely fertile."

A final twistIronically, the beachgrass was removed not to help the rare lupine but rather to help the endangered western snowy plover (Charadrius alexandrinus nivosus). Just as the lupine lost germination sites to the grass, the plover lost nesting habitat.

"Corvid populations have been exploding worldwide since the 1970s," Pardini said. "You can see it in the Christmas birdcount data. One reason is that they feast on the refuse people provide.

"So the emerging story about human intervention and the ravens is analogous to the one about the grass and the mice," she added. In both cases, people are subsidizing a species that is upsetting the balance that once existed between other species: on one hand two lupines, in the other two birds. 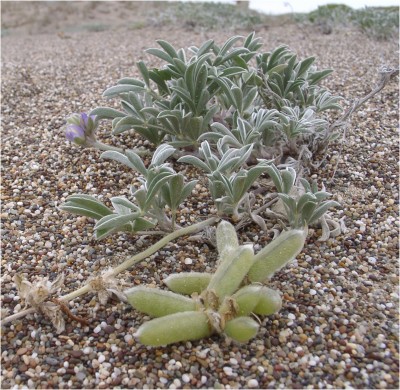 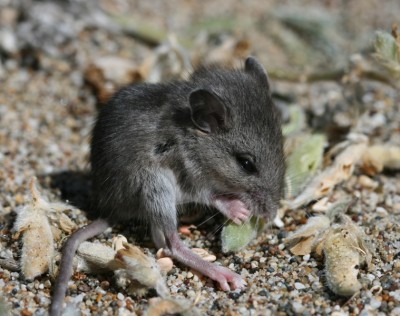 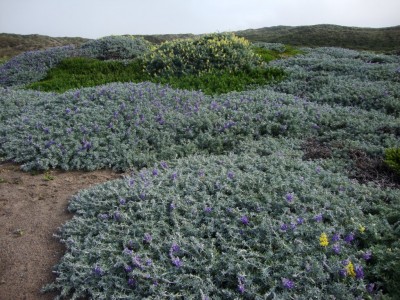 Caption: The common Chamisso bush lupine holds its seed pods above the ground or hides them in the middle of its shrubbery. This lupine's architecture makes its seeds less vulnerable to predation while they remain on the plant.