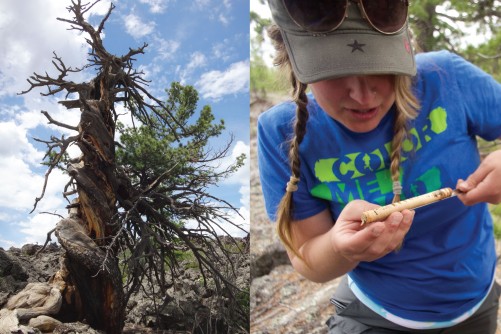 Left, a Siberian pine tree with spiral growth growing on the Uurgat Lava filed in Mongolia. Right, Kristen de Graauw, Ph.D. student in the WVU Department of Geology and Geography, examining a core from ancient Siberian pine in Mongolia. 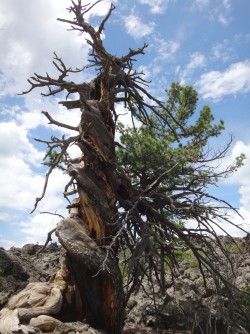 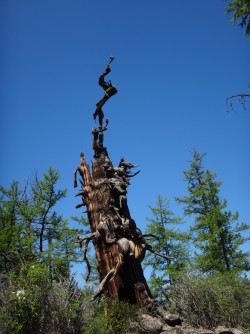 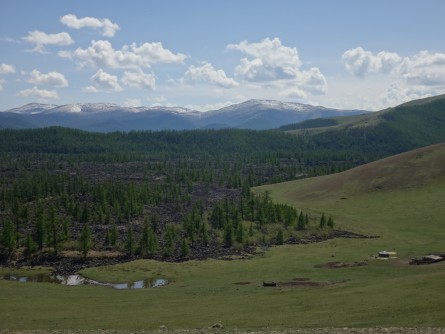 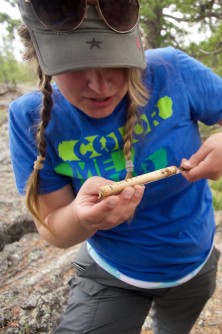 Kristen de Graauw, Ph.D. student in the WVU Department of Geology and Geography, examining a core from ancient Siberian pine in Mongolia. 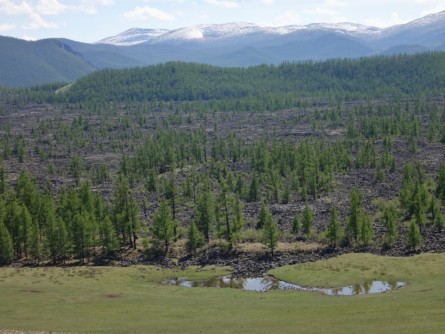 The Uurgat Lava field on a summer day in Mongolia.

Newswise — MORGANTOWN, W.Va.—Ancient trees in Mongolia dating back more than 2,000 years are helping place current and future climate change in context, according to a new West Virginia University-led study.

“As climate continues to change throughout the world, these long records allow us to put modern climatic events in context,” said Amy Hessl, a professor of geography and lead author of the study. “Similarly, comparing these long records to future climate scenarios allowed us to understand how changing temperatures and precipitation may interact in unexpected ways in the future.”

The study describes the duration and severity of past and future droughts in Mongolia, providing a unique perspective: a historical record that extends to the first millennium. Shorter records would not provide the same context.

Using dendrochronology, or the study of ring-growth patterns in trees, Hessl and colleagues created annually-dated drought histories from ancient living and dead trees growing on lava flows, extending the instrumental record back more than 2000 years.

“The ancient wood can tell us what the variability of drought was like in the past,” Hessl said. “This long record can tell us a lot about how unusual – or not – recent events have been.”

The findings from the tree-ring record show that a recent severe drought in Mongolia, which lasted from 2000 to 2010 and resulted in major livestock die-offs, the disappearance of nearly 20 percent of lakes, and a massive migration of nomadic herders to the capital city, was extreme, but not unprecedented in the last 2,000 years.

“Some of the migration to the capital city might have been a result of changes in the market, but there were lots of families whose animals died because of the combination of drought and severe winters, and they just picked up and relocated to the city,” Hessl said. “It was a major social, economic and environmental event. We were interested to see how unusual that was relative to the past and whether Mongolia can expect to see more events like that in the future.”

The research team also considered the potential for future droughts using an ensemble of climate models. Kevin Anchukaitis, an associate professor in the School of Geography and Development at the University of Arizona, used simulations from the Community Earth System Model, or CESM, and the latest phase of the Coupled Model Intercomparison Project, or CMIP5, to estimate the trajectory of future drought conditions in Mongolia. These models simulate future precipitation and temperature changes in response to rising greenhouse gases.

Model results indicated that even under the highest greenhouse gas emission scenarios, both temperature and precipitation will increase, leading to the unexpected result that droughts will be similar in their duration and severity to those of the last 2,000 years.

“You would expect, based on everything we’ve been thinking about and reading as climate scientists, that elevated temperatures are going to lead to more severe droughts in semi-arid regions,” Hessl said. “But the models did not project increased frequency or severity of droughts.”

“In Mongolia, the balance between the increase in moisture stress due to higher temperatures and increased summer precipitation is important,” Anchukaitis said. “Initially temperature trends cause increasing evapotranspiration, but eventually the rise in precipitation balances this out.”

This interaction also results in substantial uncertainty in the precise trajectory of future droughts, as does the potential role of higher carbon dioxide on how water passes through ecosystems.

Located in central Asia, a continental location at high latitude, Mongolia is one of the few places on Earth where such long, annually dated records of past drought can be derived because of how sensitive the trees are to moisture and how the ancient wood is preserved. An arid climate and little soil development on lava lead to moisture-starved trees. Cold winters and aridity have allowed dead trees to be preserved for centuries.

Mongolia is also a counterpoint to other semi-arid regions which have been the focus of previous long drought studies. Most other locations where climate change is studied, such as California and the Mediterranean, have summer dry conditions, while Mongolia has summer wet conditions, and it turns out this contrast matters for future climate change.

“The difference is critical,” Hessl said. “Warmer temperatures in Mongolia may actually contribute to elevated precipitation in the 21st century, whereas previous studies in other regions have indicated that this outcome would be unlikely.”