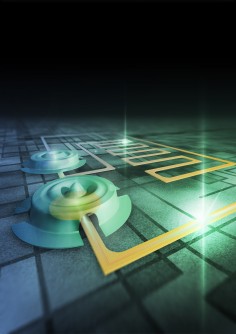 An illustration of an experiment where scientists entangled the vibrations of tiny drumheads, each the diameter of a human hair.

Newswise — Even in the odd world of quantum physics, the phenomenon known as entanglement—in which two objects become tied together although not physically connected—is among the hardest to comprehend. It’s equally difficult to achieve in the lab; scientists usually have to work very hard just to do it with single atoms.

But a UChicago physicist is among a group of researchers that announced April 26 in Nature that they had managed to entangle perhaps the largest items yet, at a whopping 20 microns across—about the diameter of a single human hair.

Scientists say that harnessing the mysterious property that Albert Einstein called “spooky action at a distance” is a crucial step toward exploiting quantum quirks for technology such as new kinds of sensors or computers.

“Entanglement is not just some academic curiosity; it’s also something you can harness as a basis for doing useful things with quantum mechanics,” said Prof. Aashish Clerk of the University of Chicago’s Institute for Molecular Engineering.

Unfortunately for applications, entangled states are typically extremely fragile—especially so when they involve large objects. So Clerk and his former postdoc Matt Woolley (now at UNSW Sydney) developed a theoretical proposal for how to keep the motion of large objects entangled. Their approach involves involved coupling the objects to a specially designed circuit made out of a superconducting metal—a special material that can have zero electrical resistance, meaning that it conducts electricity perfectly. This circuit acts to keep the two objects in the special entangled quantum state: When they are disturbed and threaten to fall out of alignment, the circuit nudges the two objects back into the entangled state.

A group led by Mika Sillanpaa at Aalto University in Finland put the idea to the test. They used a circuit to entangle the motion of two aluminum plates, each one vibrating like a tiny drumhead.  Not only did it work, but they were able to keep the plates entangled for times approaching an hour. (For most systems, the time you can maintain entanglement is measured in microseconds or even shorter.)

“Looking towards the future, there’s a lot of interest in using mechanical objects in quantum regimes for applications,” Clerk said. This includes powerful new kinds of sensors, with potential applications ranging from new ways to look inside the human body to even better methods to detect ripples of gravitational waves from faraway stars and black holes.

Such mechanical objects also could be a powerful way to integrate different systems to make up a quantum computer or quantum network, Clerk said. “Mechanical motion could be a kind of ‘bus’ for quantum information.”

Besides Aalto and UChicago, other scientists in the study hailed from Finland’s University of Jyväskylä and UNSW Canberra in Australia.