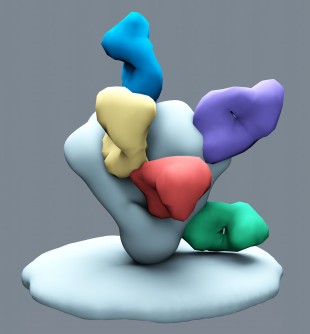 Image by Christina Corbaci, courtesy of The Scripps Research Institute

A team at The Scripps Research Institute has discovered a new vulnerable site on the HIV virus. Shown here is an electron microscopic reconstruction of the HIV-1 envelope glycoprotein trimer (pale blue) with antibodies representing each site of vulnerability in different colors, including the newly discovered PGT151 shown in red.

Newswise — LA JOLLA, CA— April 24, 2014 —A team led by scientists at The Scripps Research Institute (TSRI) working with the International AIDS Vaccine Initiative (IAVI) has discovered a new vulnerable site on the HIV virus. The newly identified site can be attacked by human antibodies in a way that neutralizes the infectivity of a wide variety of HIV strains.

“HIV has very few known sites of vulnerability, but in this work we’ve described a new one, and we expect it will be useful in developing a vaccine,” said Dennis R. Burton, professor in TSRI’s Department of Immunology and Microbial Science and scientific director of the IAVI Neutralizing Antibody Center (NAC) and of the National Institutes of Health’s Center for HIV/AIDS Vaccine Immunology and Immunogen Discovery (CHAVI-ID) on TSRI’s La Jolla campus.

The findings were reported in two papers—one led by Burton and the second led by TSRI Assistant Professor Andrew B. Ward, also a member of NAC and CHAVI-ID, and Wilson—appearing in the May issue of the journal Immunity.

The discovery is part of a large, IAVI- and NIH-sponsored effort to develop an effective vaccine against HIV. Such a vaccine would work by eliciting a strong and long-lasting immune response against vulnerable conserved sites on the virus—sites that don’t vary much from strain to strain, and that, when grabbed by an antibody, leave the virus unable to infect cells.

HIV generally conceals these vulnerable conserved sites under a dense layer of difficult-to-grasp sugars and fast-mutating parts of the virus surface. Much of the antibody response to infection is directed against the fast-mutating parts and thus is only transiently effective.

Prior to the new findings, scientists had been able to identify only a few different sets of “broadly neutralizing” antibodies, capable of reaching four conserved vulnerable sites on the virus. All these sites are on HIV’s only exposed surface antigen, the flower-like envelope (Env) protein (gp140) that sprouts from the viral membrane and is designed to grab and penetrate host cells.

Emilia Falkowska, a research associate in the Burton laboratory who was a key author of the first paper, and colleagues soon found a set of eight closely related antibodies that accounted for most of one of the sample’s HIV neutralizing activity. The scientists determined that the two broadest neutralizers among these antibodies, PGT151 and PGT152, could block the infectivity of about two-thirds of a large panel of HIV strains found in patients worldwide.

Curiously, despite their broad neutralizing ability, these antibodies did not bind to any previously described vulnerable sites, or epitopes, on Env—and indeed failed to bind tightly anywhere on purified copies of gp120 or gp41, the two protein subunits of Env. Most previously described broadly neutralizing HIV antibodies bind to one or the other Env subunit. The researchers eventually determined, however, that PGT151 and PGT152 attach not just to gp120 or gp41 but to bits of both.

In fact, gp120 and gp41 assemble into an Env structure not as one gp120-gp41 combination but as three intertwined ones—a trimer, in biologists’ parlance. PGT151 and 152 (which are nearly identical) turned out to have a binding site that occurs only on this mature and properly assembled Env trimer structure.

“These are the first HIV neutralizing antibodies we’ve found that unequivocally distinguish mature Env trimer from all other forms of Env,” said Falkowska. “That’s important because this is the form of Env that the virus uses to infect cells.”

The second of the two new studies was an initial structural analysis of the new vulnerable epitope.

Using an integrative approach that combined electron microscopy on the Env trimer complex with PGT151 (led by the Ward lab) with the structure of the PGT151 Fab by x-ray crystallography (led by the Wilson lab), the scientists were able to visualize the location of the PGT151-series binding site on the Env trimer—which includes a spot on one gp41 protein with two associated sugars (glycans), a patch on the gp120 protein and even a piece of the adjacent gp41 within the trimer structure—“a very complex epitope,” said Claudia Blattner, a research associate in the Wilson laboratory at TSRI and member of the IAVI Neutralizing Antibody Center who, along with graduate student Jeong Hyun Lee, was a first author of the second paper.

A surprise finding was that the PGT151-series antibodies bind to the Env trimer in a way that stabilizes its otherwise fragile structure. “Typically when you try to purify the native Env trimer, it falls apart, which has made it very hard to study,” said Ward. “It was a key breakthrough to find an antibody that stabilizes it.”

Although the PGT151 site is valuable in itself as an attack point for an HIV vaccine, its discovery also hints at the existence of other similar complex and vulnerable epitopes on HIV.

The International AIDS Vaccine Initiative (IAVI) is a global not-for-profit organization whose mission is to ensure the development of safe, effective, accessible, preventive HIV vaccines for use throughout the world. Founded in 1996, IAVI works with private companies, academics, and civil society partners in 25 countries to research, design, and develop AIDS vaccine candidates. In addition, IAVI conducts policy analyses and serves as an advocate for the AIDS vaccine field. IAVI supports a comprehensive approach to addressing HIV and AIDS that balances the expansion and strengthening of existing HIV-prevention and treatment programs with targeted investments in the design and development of new tools to prevent HIV. IAVI is dedicated to ensuring that a future AIDS vaccine will be available and accessible to all who need it.

IAVI’s work is made possible by generous support from many donors including: the Bill & Melinda Gates Foundation; the Ministry of Foreign Affairs of Denmark; Irish Aid; the Ministry of Finance of Japan; the Ministry of Foreign Affairs of the Netherlands; the Norwegian Agency for Development Cooperation (NORAD); the United Kingdom Department for International Development (DFID), and the United States Agency for International Development (USAID). The full list of IAVI donors is available at www.iavi.org. These studies were made possible in part by the generous support of the American people through USAID. The contents are the responsibility of the authors and do not necessarily reflect the views of USAID or the United States Government.