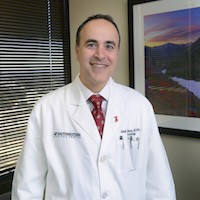 Newswise — DALLAS – April 27, 2016 – Cardiologists at UT Southwestern Medical Center have found that sedentary behavior is associated with increased amounts of calcium deposits in heart arteries, which in turn is associated with a higher risk of heart attack.

Researchers at UT Southwestern have previously shown that excessive sitting is associated with reduced cardiorespiratory fitness and a higher risk of heart disease. The latest research – part of UT Southwestern’s Dallas Heart Study – points to a likely mechanism by which sitting leads to heart disease.

“This is one of the first studies to show that sitting time is associated with early markers of atherosclerosis buildup in the heart,” said senior author Dr. Amit Khera, Associate Professor of Internal Medicine and Director of the Preventive Cardiology Program. “Each additional hour of daily sedentary time is associated with a 12 percent higher likelihood of coronary artery calcification.”

The researchers concluded that reducing daily “sitting time” by even 1 to 2 hours per day could have a significant and positive impact on future cardiovascular health, and called for additional studies into novel interventions to reduce sedentary behaviors. For the many individuals with a desk job that requires them to sit for large portions of the day, they suggested taking frequent breaks.

“Try a one to five minute break every hour. Stand up. Walk up a flight of stairs. All of this helps in a small way. Then get in your strenuous exercise in the evening as well,” said Dr. Julia Kozlitina, Assistant Professor of Internal Medicine and Clinical Sciences and with the Eugene McDermott Center for Human Growth and Development.

In this study, the researchers asked some 2,000 participants in the Dallas Heart Study to wear a device that measured their activity levels for a week. Participants spent an average of 5.1 hours sitting per day and an average of 29 minutes in moderate to vigorous physical activity each day.

“We observed a significant association between increased sedentary time and coronary artery calcium,” said Dr. Khera, who holds the 2013 Dallas Heart Ball Chair in Hypertension and Heart Disease. “These associations were independent of exercise, traditional cardiovascular disease risk factors such as diabetes and high blood pressure, and socioeconomic factors. This research suggests that increased subclinical atherosclerosis characterized by calcium deposition is one of the mechanisms through which sedentary behavior increases cardiovascular risk and that this risk is distinct from the protective power of exercise.”

The Dallas Heart Study, which has been under way for 16 years with funding from the Donald W. Reynolds Foundation, is an ongoing epidemiology study that has yielded a plethora of research and a much-heralded new class of cholesterol-lowering drugs. It has involved more than 6,000 participants, has led to more than 200 published papers, identified two genes associated with fatty liver disease, and led to a breakthrough drug class for lowering cholesterol called PCSK9-inhibitors. Among other findings from the study: Hispanics are at higher risk of developing fatty liver disease and C-reactive protein levels vary between men and women.

Phase III of the Dallas Heart Study, under the direction of Dr. Khera, is now in the works, with general scientific focus on healthy aging, using imaging and sophisticated testing to look at early markers of age-related transitions. The goal is to determine how to best preserve health and modify decline with time.

The current study appears online in the Journal of the American College of Cardiology: Cardiovascular Imaging. Other UT Southwestern researchers who contributed to the study are Dr. Jarett Berry, Associate Professor of Internal Medicine and a Dedman Family Scholar in Clinical Care; and Dr. James de Lemos, Professor of Internal Medicine and holder of the Sweetheart Ball-Kern Wildenthal, M.D., Ph.D. Distinguished Chair in Cardiology. Dr. Berry has received consultant fees/honoraria from Nihon; and is a member of the speaker’s bureau for Merck. Dr. de Lemos has received consultant fees/honoraria from Amgen, DiaDexus, Data and Safety Monitoring Board for Novo Nordisk, St. Jude Medical, and Siemen’s Diagnostics; and research grants from Abbott Diagnostics. Researchers from the Medical College of Wisconsin also were involved in the study. About UT Southwestern Medical CenterUT Southwestern, one of the premier academic medical centers in the nation, integrates pioneering biomedical research with exceptional clinical care and education. The institution’s faculty includes many distinguished members, including six who have been awarded Nobel Prizes since 1985. The faculty of almost 2,800 is responsible for groundbreaking medical advances and is committed to translating science-driven research quickly to new clinical treatments. UT Southwestern physicians provide medical care in about 80 specialties to more than 100,000 hospitalized patients and oversee approximately 2.2 million outpatient visits a year.