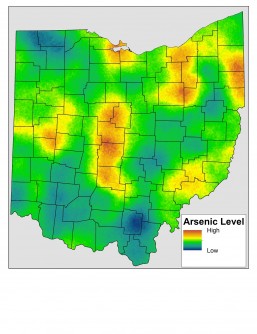 Arsenic levels in topsoil in Ohio

Newswise — RICHLAND, Wash. – Geologic and soil processes are to blame for significant baseline levels of arsenic in soil throughout Ohio, according to a study published recently in the Journal of Environmental Quality.

The analysis of 842 soil samples from all corners of Ohio showed that every single sample had concentrations higher than the screening level of concern recommended by the U.S. Environmental Protection Agency. The findings should not alarm the public, say the authors, who note that regulatory levels typically are set far below those thought to be harmful. Rather, the findings pose a real challenge for regulators, who must determine what levels should trigger action when natural arsenic levels everywhere are above suggested screening standards.

The researchers found that the patterns of arsenic in Ohio soils are most closely related to the arsenic content of the underlying bedrock, which was formed approximately 250 to 300 million years ago. Glacial and soil processes have modified the landscape since.

“The distribution of arsenic throughout Ohio appears to be the result of natural patterns,” said first author Erik Venteris of the Department of Energy’s Pacific Northwest National Laboratory, who was with the Division of Geological Survey of the Ohio Department of Natural Resources when the study was done.

Researchers from PNNL, Ohio State University, and the state of Ohio’s Division of Geological Survey did the study, one of the most thorough analyses of arsenic levels to date over a broad area.

Arsenic and Old OhioScientists have long known that arsenic levels in Ohio and many other parts of the world are consistently high, even beyond spikes of the element due to smelters, herbicide use, and other human activity.

Arsenic’s reputation as a poison is warranted. High levels can cause cancer, neuromuscular damage, skin diseases, and death. People can be exposed to arsenic found in the soil through drinking water, through the foods they eat, and even through minute amounts of dirt they unknowingly ingest each day. But like many compounds, the element – abundant in Earth’s crust – does little or no measurable harm at very low levels.

Deciding at just what level arsenic is harmful, and when regulators should take action to lower levels, is tremendously difficult.

The team set out to get a comprehensive picture of arsenic levels across the state, studying samples from areas with minimal human activity. For example, arsenic has been used for decades as a wood preservative and in pesticides and herbicides, so soil samples near fence posts and orchards were avoided.

The team analyzed samples from soil and stream sediments from across the nearly 45,000 square miles of land that make up Ohio. They included soil samples that the U.S. Geological Survey collected as part of the National Geochemical Survey and from a previous study related to uranium exploration. The analysis included two soil samples each from 348 sites throughout Ohio (one sample taken from 6-12 inches below the surface and another from 12-24 inches deep) and 144 sediment samples from streams.

“When every soil sample has more arsenic than the recommended screening level, it may be time to re-evaluate those regulatory levels and to think about how best to interpret the data,” said co-author Nicholas Basta, professor of Soil and Environmental Chemistry at Ohio State.

Yesterday’s rocks, today’s soilThe study found that bedrock created from about 250 to 425 million years ago, a time when Ohio was positioned near the equator and under warm tropical sea waters for much of the time, is the source of significant levels of arsenic in soils throughout the state.

Some parts of the state had consistently higher levels, including the central, western and northeastern Ohio; areas with lower levels included northwestern and southwestern Ohio.

The authors say that as rocks weathered over time to create the soils, the rocks released arsenic that became part of the soil. They believe that other conditions, such as consistently wet soils, reduced levels of arsenic in some areas of the state, such as northwest Ohio.

“Many processes can break down bedrock, spread the material, and potentially mobilize the arsenic so it leaches out,” said Venteris. “How much arsenic is present in a given location depends on what was originally in the bedrock and how that rock has been altered over time through complex erosion and chemical weathering processes. The result is that arsenic levels vary significantly – but predictably – within a region.”

Levels from soil samples 18 to 24 inches below the surface were on average almost 50 percent higher than levels in the topsoil – more evidence that high levels are due to geological conditions and not human activity, Venteris said.

“These findings should be helpful to help evaluate risks properly,” said Basta, a faculty member at Ohio State’s School of Environment and Natural Resources and an expert on rehabilitating urban soils. “Now we have a good scientific understanding of how the levels throughout Ohio came to be.”