2-Feb-2015 8:00 AM EST, by Columbia University School of Engineering and Applied Science 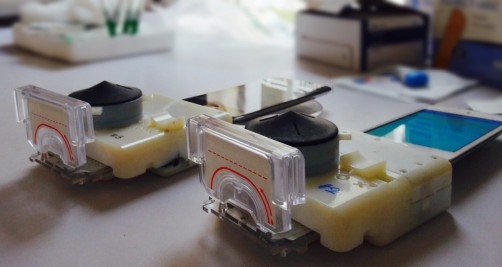 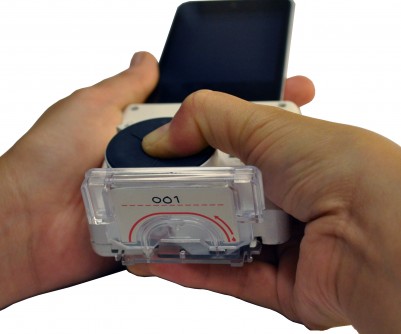 The user presses the bulb of the smartphone dongle, designed to fit in one hand, to initiate the fluid flow. 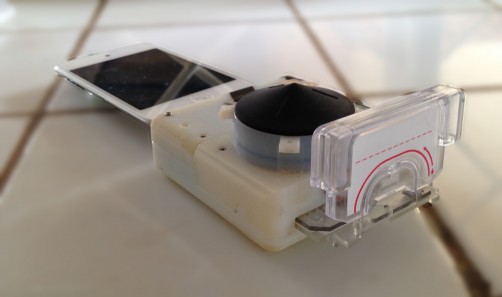 The smartphone dongle runs assays on disposable plastic cassettes with preloaded reagents and minimal user steps to enable a “plug-and-play” operation for the user.

Newswise — New York, NY—February 4, 2015—A team of researchers, led by Samuel K. Sia, associate professor of biomedical engineering at Columbia Engineering, has developed a low-cost smartphone accessory that can perform a point-of-care test that simultaneously detects three infectious disease markers from a finger prick of blood in just 15 minutes. The device replicates, for the first time, all mechanical, optical, and electronic functions of a lab-based blood test. Specifically, it performs an enzyme-linked immunosorbent assay (ELISA) without requiring any stored energy: all necessary power is drawn from the smartphone. It performs a triplexed immunoassay not currently available in a single test format: HIV antibody, treponemal-specific antibody for syphilis, and non-treponemal antibody for active syphilis infection.

Sia’s innovative accessory or dongle, a small device that easily connects to a smartphone or computer, was recently piloted by health care workers in Rwanda who tested whole blood obtained via a finger prick from 96 patients who were enrolling into prevention-of-mother-to-child-transmission clinics or voluntary counseling and testing centers. The work is published February 4 in Science Translational Medicine. Sia collaborated with researchers from Columbia’s Mailman School of Public Health; the Institute of HIV Disease Prevention and Control, Rwanda Biomedical Center; Department of Pathology and Cell Biology, Columbia University Medical Center; Centers for Disease Control and Prevention—Laboratory Reference and Research Branch, Atlanta; and OPKO Diagnostics.

“Our work shows that a full laboratory-quality immunoassay can be run on a smartphone accessory,” says Sia. “Coupling microfluidics with recent advances in consumer electronics can make certain lab-based diagnostics accessible to almost any population with access to smartphones. This kind of capability can transform how health care services are delivered around the world.”

Sia’s team wanted to build upon their previous work in miniaturizing diagnostics hardware for rapid point-of-care diagnosis of HIV, syphilis, and other sexually transmitted diseases. “We know that early diagnosis and treatment in pregnant mothers can greatly reduce adverse consequences to both mothers and their babies,” Sia notes.

They developed the dongle to be small and light enough to fit into one hand, and to run assays on disposable plastic cassettes with pre-loaded reagents, where disease-specific zones provided an objective read-out, much like an ELISA assay. Sia estimates the dongle will have a manufacturing cost of $34, much lower than the $18,450 that typical ELISA equipment runs.

The team made two main innovations to the dongle to achieve low power consumption, a must in places that do not always have electricity 24/7. They eliminated the power-consuming electrical pump by using a “one-push vacuum,” where a user mechanically activates a negative-pressure chamber to move a sequence of reagents pre-stored on a cassette. The process is durable, requires little user training, and needs no maintenance or additional manufacturing. Sia’s team was able to implement a second innovation to remove the need for a battery by using the audio jack for transmitting power and for data transmission. And, because audio jacks are standardized among smartphones, the dongle can be attached to any compatible smart device (including iPhones and Android phones) in a plug-and-play manner.

During the field testing in Rwanda, health care workers were given 30 minutes of training, which included a user-friendly interface to aid the user through each test, step-by-step pictorial directions, built-in timers to alert the user to next steps, and records of test results for later review. The vast majority of patients (97%) said they would recommend the dongle because of its fast turn-around time, ability to offer results for multiple diseases, and simplicity of procedure.

“Our dongle presents new capabilities for a broad range of users, from health care providers to consumers,” Sia adds. “By increasing detection of syphilis infections, we might be able to reduce deaths by 10-fold. And for large-scale screening where the dongle’s high sensitivity with few false negatives is critical, we might be able to scale up HIV testing at the community level with immediate antiretroviral therapy that could nearly stop HIV transmissions and approach elimination of this devastating disease.”

“We are really excited about the next steps in bringing this product to the market in developing countries,” he continues. “And we are equally excited about exploring how this technology can benefit patients and consumers back home.” 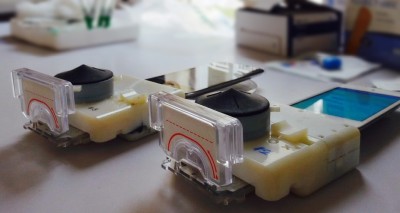 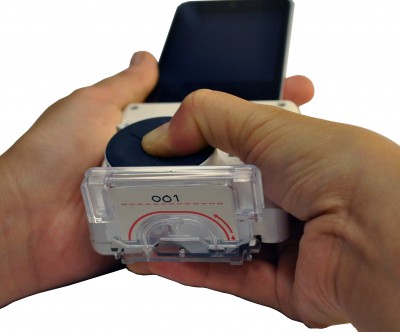 Caption: The user presses the bulb of the smartphone dongle, designed to fit in one hand, to initiate the fluid flow. 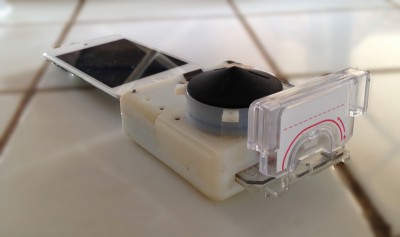 Caption: The smartphone dongle runs assays on disposable plastic cassettes with preloaded reagents and minimal user steps to enable a “plug-and-play” operation for the user.