Newswise — Hurricanes and heavy rains often cause strong, overflowing river currents that can damage critical infrastructure, such as bridges. For example, after Hurricane Katrina, many National Guard convoys loaded with aid did not drive on bridges for fear the bridges could not support the heavy trucks. To safely transport, they had to use roundabout roads or boats to reach Katrina survivors.

Loose or loosening soil is often the culprit in weakening bridge stability. Thus, an instrument that can quickly assess the soil conditions around bridge pillars became a top priority for the Department of Homeland Security (DHS) Science and Technology Directorate (S&T), as well as state and local governments.

The result of the project, conducted by DHS S&T’s Coastal Hazards Center of Excellence, is the lightweight but efficient In-situ Erosion Evaluation Probe, also known as Soil Probe. The project has delivered the probe as well as an accompanying standard (coming out this fall) that proves the viability of this technology.

The tool, which only needs chargeable batteries to drive the water pump, is made up of a stiff cylinder and a pump that uses the water surrounding the bridge to jet away soil and sink the probe deeper. “After powerful storms come through, being able to quickly assess whether or not key transportation infrastructure can hold heavy trucks that deliver relief aid is vital,” said Eleanore Hajian, the DHS S&T Program Manager responsible for the Soil Probe project.

Departments of Transportation in many states could benefit from this instrument when there is a concern about bridge stability. Transportation and bridge engineers, contractors, even the Federal Emergency Management Agency (FEMA), could do field assessments as needs arise.

What the Soil Probe can do and how it works

The Soil Probe addresses the problem of scour, which is an engineering term describing the erosion of soil around a structure caused by water flow. Scour can make bridge pillars unstable. Usually after powerful storms, strong river currents wash away the soil around pillars and can even deposit new soil. New soil is less dense, so pillars can become unstable and fall when heavy equipment starts rumbling across a bridge.

“The strength of the bridge is dependent on how strong the soil is,” said Dr. Mohammed Gabr, a Distinguished Professor of Civil Engineering and Construction at North Carolina State University who developed the Soil Probe.

In the past, it took a long time to determine the stability of bridge pillars. Engineers took core samples with heavy and expensive equipment and required several hours or days for the results to be ready. For sand samples, scientists would pour expensive liquid hydrogen to freeze the ground so the sand’s original structure was preserved.

These limitations helped inform the requirements for the Soil Probe device, including minimal dependence on power and easy operation by two people. Also, with this probe, there is no need to gather samples for laboratory testing to assess the soil resistance to erosion.

“This device can be used in places where taking samples is not feasible,” Gabr said. “The testing is rapid—it can go 30 feet deep within five minutes—and can be done in many places along a bridge for a complete mapping of the bridge foundation support area. The most time-consuming part is driving to the site.”

“How fast the soil washes away depends on how strong the soil is,” Gabr explained. “The probe would bury itself quicker in soft soil compared to strong, compact soil.”

Gabr and his team developed a prototype they tested in the lab and in the field. The last test was in 2016 after hurricane Irene opened a new inlet on Pea Island in the Outer Banks, North Carolina.

“The Department of Transportation was putting a temporary bridge over the new inlet,” he said. “After we tested, we confirmed the soil was safe for a permanent bridge.”

“It is a really big deal to get a new standard published,” said Hajian.

For this standard, ASTM required testing to get reliable, repeatable results.

“For a standard to come out, it needs to have 100 percent approval,” said Philip Mattson, Director of Office of Standards for S&T and Chairman for ASTM International Committee on Homeland Security.

“This is an example of a transition of a knowledge product, the Soil Probe, into a standard,” said Mattson. “A standard gives greater visibility and credibility because it goes through a much broader vetting process.” 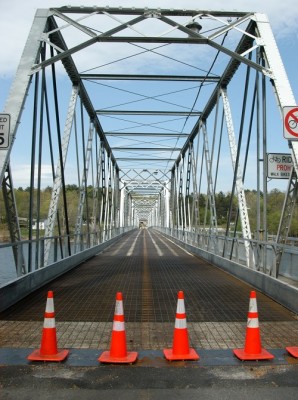 Caption: Bridge to New Jersey in Upper Makefield, Pa. was closed in April, 2005 due to flooding.

Caption: The Soil Probe stands on a beach in Pea Island, N.C. 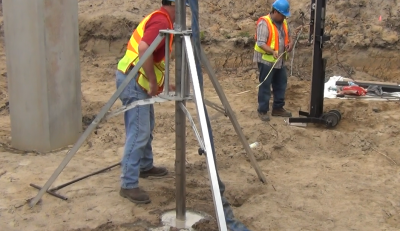 Caption: Engineers use the Soil Probe to test the stability of a bridge foundation near the Atlantic coast in Wilmington, N.C.