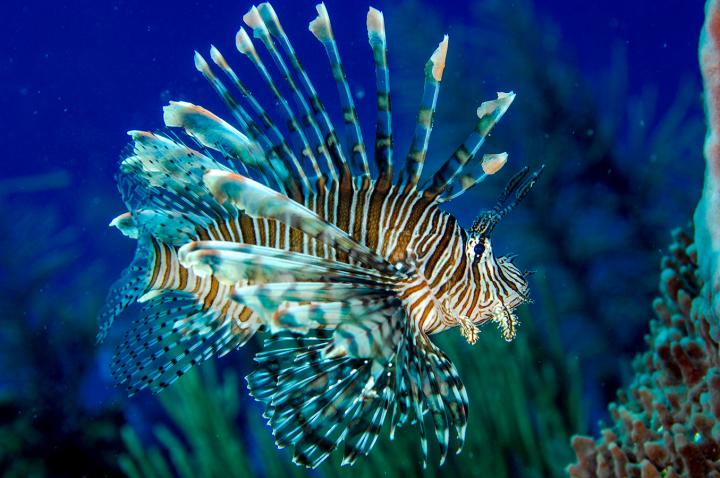 Lionfish, like the one seen here in Belize, can be devastating for the local ecosystems they invade. 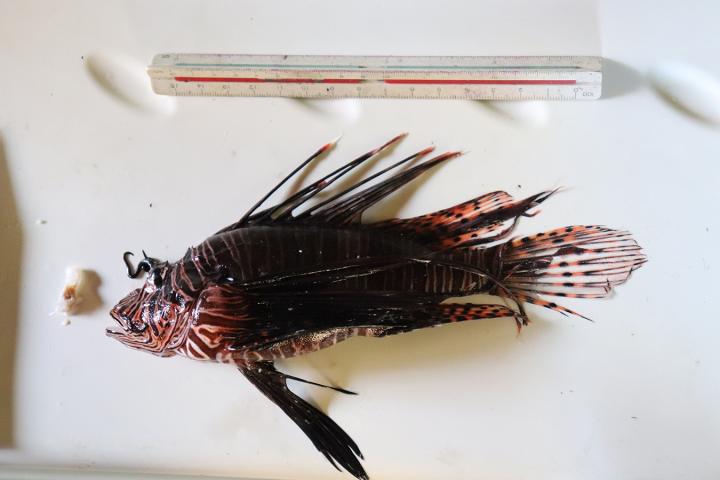 One of the first documented lionfish specimens off the coast of Brazil.

Newswise — SAN FRANCISCO, CA (June 3, 2021) -- Since arriving to the northern Atlantic Ocean less than 30 years ago, lionfish have quickly become one of the most widespread and voracious invasive species, negatively impacting marine ecosystems--particularly coral reefs--from the northeast coast of the United States to the Caribbean Islands. In a new study, an international research team including the California Academy of Sciences presents four new records of lionfish off the coast of Brazil, confirming the invasion of the predatory fish into the South Atlantic for the first time. Their findings, published today in Biological Invasions, discuss how the lionfish may have arrived in the region, and hold important insights on how Brazil's diving and fishing communities can help manage the invasion before it potentially devastates local ecosystems.

"For a while it was uncertain whether or not lionfish would extend into the South Atlantic," says Academy Curator of Ichthyology and study co-author Luiz Rocha. "Now that we know they are here, it is imperative that we uncover how they arrived and work with local communities to keep the population under control. If left unchecked, lionfish could have a huge impact on local species, particularly those that exist solely in the reefs surrounding Brazil's oceanic islands."

Sporting maroon stripes and more than a dozen venomous spines, lionfish have long been a staple in the hobbyist aquarium trade. Like other popular aquarium fish, however, they are sometimes irresponsibly released into the wild. Indeed, it is likely that the invasion of lionfish in the Atlantic Ocean began that way.

Once they enter new waters, lionfish can quickly disrupt local ecosystems and disperse to other locations. Due to their broad diet, lack of natural predators, unique hunting style, and year-round reproduction of buoyant eggs that can travel long distances on ocean currents, lionfish have expanded faster than any other invasive marine species.

Despite those traits, lionfish have been noticeably absent in the South Atlantic--a phenomenon that the researchers attribute to the northerly flowing currents at the oceanic boundary between Brazilian and Caribbean waters. But in 2015, a local diver photographed a lionfish swimming off the southern coast of Brazil and alerted the researchers, who 11 months later found and collected the specimen confirming the species' expansion into Brazil.

After that initial discovery, the researchers--with help from local fisherman and divers--were able to track down three additional lionfish in Brazil's waters: two from deep coral reefs known as mesophotic reefs and one from reefs surrounding the Fernando de Noronha Archipelago around 200 miles off the country's northeastern coast.

Though all of the incidents are troubling, the researchers say that the Fernando de Noronha record is of particular concern. "The arrival of lionfish to Brazil's oceanic islands is especially worrying," says marine biologist and study co-author Clara Buck. "These unique ecosystems have a high number of endemic species found nowhere else on Earth making them much more sensitive to adverse impacts."

To curb the invasion before it accelerates, it is crucial to know how the lionfish are arriving in the region in the first place. In their study, the researchers propose that the lionfish found in the mesophotic reefs may have arrived in a stepping-stone fashion, utilizing deeper reefs under the Amazon plume to slowly push southwards from the Caribbean.

In contrast, they suggest that the individual found at Fernando de Noronha arrived by more conventional means, traveling along the currents between the islands and the Caribbean as a larva. Since the archipelago is distant from the mainland, lionfish larva can subvert the oceanic boundary that exists closer to the coastline.

Regardless of how they arrived, now that the lionfish are there the researchers urge the Brazilian government and local communities to stem the invasion. While efforts elsewhere in the Atlantic have shown that full eradication of the lionfish is unlikely, the researchers say that keeping population numbers low could buy precious time for local species to adapt to the voracious fish and ultimately avoid predation.

From spearing the lionfish they come across to alerting researchers of emerging populations, local fishermen and divers--like those who assisted with this study--will play a critical role in managing the invasion, and protecting the coral reefs and local species that sustain their livelihoods.

Despite the challenges they face, Rocha is optimistic they can succeed. "Brazil, and Fernando de Noronha in particular, have robust local diving and fishing communities," he says. "If we put the right tools in their hands, it is absolutely possible to keep the invasion under control."

About Research at the California Academy of Sciences

The Institute for Biodiversity Science and Sustainability at the California Academy of Sciences is at the forefront of efforts to understand two of the most important topics of our time: the nature and sustainability of life on Earth. Based in San Francisco, the Institute is home to more than 100 world-class scientists, state-of-the-art facilities, and nearly 46 million scientific specimens from around the world. The Institute also leverages the expertise and efforts of more than 100 international Associates and 450 distinguished Fellows. Through expeditions around the globe, investigations in the lab, and analysis of vast biological datasets, the Institute's scientists work to understand the evolution and interconnectedness of organisms and ecosystems, the threats they face around the world, and the most effective strategies for sustaining them into the future. Through innovative partnerships and public engagement initiatives, they also guide critical sustainability and conservation decisions worldwide, inspire and mentor the next generation of scientists, and foster responsible stewardship of our planet.

Caption: Lionfish, like the one seen here in Belize, can be devastating for the local ecosystems they invade.

Caption: One of the first documented lionfish specimens off the coast of Brazil.