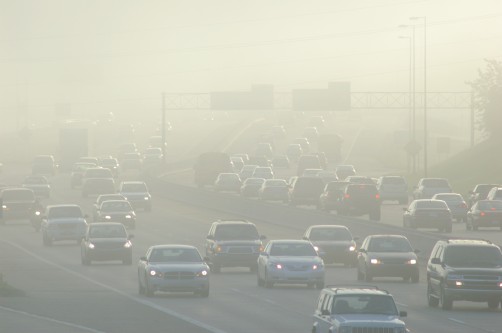 Individuals who have A, B, or AB blood types have an elevated risk of having a heart attack during periods of significant air pollution, compared to those with the O blood type, according to new research.

Newswise — Individuals who have A, B, or AB blood types have an elevated risk of having a heart attack during periods of significant air pollution, compared to those with the O blood type, according to new research from the Intermountain Medical Center Heart Institute and Brigham Young University.

The ABO gene — which is present in people who have A, B, and AB blood types — is the only gene that’s been validated in large international studies to predict heart attacks among people with coronary disease.

Previous studies have also shown links between small-particulate PM2.5 pollution and heart attacks, admission to the hospital with unstable chest pain, heart failure, and atrial fibrillation. This new study was designed to build on and tie together those findings and test the influence of one variation: the impact of an individual’s blood type.

“We wondered, if someone has a specific variation in this ABO gene, are they more or less likely to experience a heart attack in times of higher pollution?” said Benjamin Horne, PhD, a clinical epidemiologist and lead investigator of the study from the Intermountain Medical Center Heart Institute. “The primary mutation we studied differentiates between O blood types and non-O, which includes positive and negative A, B, and AB blood types. The one that’s been found in genetic studies to be lower risk is O. The other three were higher risk.”

Results of the study will be reported at the 2017 American Heart Association Scientific Sessions in Anaheim, CA, on Tuesday, November 14, at noon, PST.

“You have to have other characteristics for coronary disease to progress to a heart attack,” Dr. Horne said.  “The association between heart attacks and pollution in patients with non-O blood isn’t something to panic over, but it is something to be aware of.”

Intermountain Medical Center Heart Institute researchers had already identified a level of pollution at which the increased risk occurred for people with non-O blood types, he said, and that threshold is 25 micrograms of pollution per cubic meter.

“Two years ago we published findings that showed once you go above that, each additional 10 micrograms of pollution per cubic meter of air provided substantially higher risks,” he said. “At levels higher than 25 micrograms per cubic meter of pollution, the increase in risk is linear, while below that level there’s little if any difference in risk.”

The clinical data used for the study came from Intermountain Healthcare patients seen between 1993 and 2007. C. Arden Pope, PhD, from BYU, and one of the study authors, provided the air pollution data. The analysis of air quality was done at BYU.

During a winter inversion, the PM2.5 pollution level can occasionally reach as high as 100 micrograms per cubic meter, but 50-60 is more typical.

Researchers found that people with type O blood also have higher risk of heart attack or unstable chest pain in times of high air pollution. But their level of risk is much smaller, at 10 percent instead of the non-O blood type’s 25 percent per 10 additional micrograms per cubic meter, Dr. Horne said. So at the 65 micrograms per cubic meter pollution level, a person with type O blood faces risk that’s 40 percent higher than if the air wasn’t polluted.

“In the information we provide to our patients about pollution, we try to stress that they can do something about it to reduce their risks: Stay indoors out of pollution. Exercise indoors. And make sure they’re compliant with taking their heart medication to reduce their risk,” Dr. Horne said.