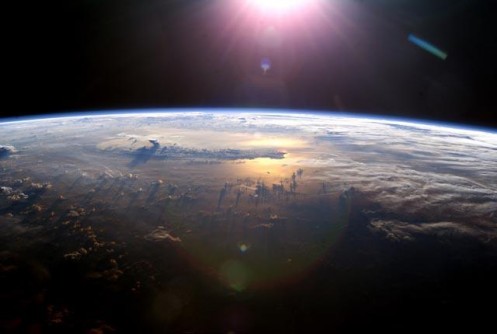 This is a view of Earth's atmosphere taken from the International Space Station in 2003. 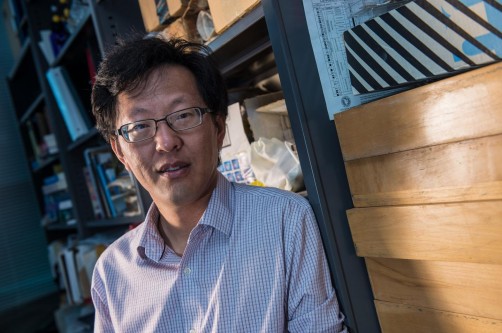 Newswise — Earth scientists from Rice University, Yale University and the University of Tokyo are offering a new answer to the long-standing question of how our planet acquired its oxygenated atmosphere.

Based on a new model that draws from research in diverse fields including petrology, geodynamics, volcanology and geochemistry, the team's findings were published online this week in Nature Geoscience. They suggest that the rise of oxygen in Earth's atmosphere was an inevitable consequence of the formation of continents in the presence of life and plate tectonics.

"It's really a very simple idea, but fully understanding it requires a good bit of background about how the Earth works," said study lead author Cin-Ty Lee, professor of Earth science at Rice. "The analogy I most often use is the leaky bathtub. The level of water in a bathtub is controlled by the rate of water flowing in through the faucet and the efficiency by which water leaks out through the drain. Plants and certain types of bacteria produce oxygen as a byproduct of photosynthesis. This oxygen production is balanced by the sink: reaction of oxygen with iron and sulfur in the Earth's crust and by back-reaction with organic carbon. For example, we breathe in oxygen and exhale carbon dioxide, essentially removing oxygen from the atmosphere. In short, the story of oxygen in our atmosphere comes down to understanding the sources and sinks, but the 3-billion-year narrative of how this actually unfolded is more complex."

Lee co-authored the study with Laurence Yeung and Adrian Lenardic, both of Rice, and with Yale's Ryan McKenzie and the University of Tokyo's Yusuke Yokoyama. The authors' explanations are based on a new model that suggests how atmospheric oxygen was added to Earth's atmosphere at two key times: one about 2 billion years ago and another about 600 million years ago.

Today, some 20 percent of Earth's atmosphere is free molecular oxygen, or O2. Free oxygen is not bound to another element, as are the oxygen atoms in other atmospheric gases like carbon dioxide and sulfur dioxide. For much of Earth's 4.5-billion-year history, free oxygen was all but nonexistent in the atmosphere.

"It was not missing because it is rare," Lee said. "Oxygen is actually one of the most abundant elements on rocky planets like Mars, Venus and Earth. However, it is one of the most chemically reactive elements. It forms strong chemical bonds with many other elements, and as a result, it tends to remain locked away in oxides that are forever entombed in the bowels of the planet -- in the form of rocks. In this sense, Earth is no exception to the other planets; almost all of Earth's oxygen still remains locked away in its deep rocky interior."

Lee and colleagues showed that around 2.5 billion years ago, the composition of Earth's continental crust changed fundamentally. Lee said the period, which coincided with the first rise in atmospheric oxygen, was also marked by the appearance of abundant mineral grains known as zircons.

"The presence of zircons is telling," he said. "Zircons crystallize out of molten rocks with special compositions, and their appearance signifies a profound change from silica-poor to silica-rich volcanism. The relevance to atmospheric composition is that silica-rich rocks have far less iron and sulfur than silica-poor rocks, and iron and sulfur react with oxygen and form a sink for oxygen.

"Based on this, we believe the first rise in oxygen may have been due to a substantial reduction in the efficiency of the oxygen sink," Lee said. "In the bathtub analogy, this is equivalent to partially plugging the drain."

Lee said the study suggests that the second rise in atmospheric oxygen was related to a change in production -- analogous to turning up the flow from the faucet.

"The bathtub analogy is simple and elegant, but there's an added complication that must be taken into account," he said. "That is because oxygen production is ultimately tied to the global carbon cycle -- the cycling of carbon between the Earth, the biosphere, the atmosphere and oceans."

Lee said the model showed that Earth's carbon cycle has never been at a steady state because carbon slowly leaks out as carbon dioxide from Earth's deep interior to the surface through volcanic activity. Carbon dioxide is one of the key ingredients for photosynthesis.

"On long, geologic timescales, carbon is removed from the atmosphere by the production of condensed forms of carbon, such as organic carbon and minerals called carbonate," he said. "For most of Earth's history, most of this carbon has been deposited not in the deep ocean but rather on the margins of continents. The implications are profound because carbon deposited on continents does not return to Earth's deep interior. Instead, it amplifies carbon inputs into the atmosphere when the continents are subsequently perturbed by volcanism."

"Exactly when is model-dependent, but what is clear is that the formation of continental crust naturally leads to two rises in atmospheric oxygen, just as we see in the fossil record," Lee said.

Exactly what caused the composition of the crust to change during the first oxygenation event remains a mystery, but Lee said the team believes it may have been related to the onset of plate tectonics, where the Earth's surface, for the first time, became mobile enough to sink back down into Earth's deep interior.

Lee said the team's new model is not without controversy. For example, the model predicts that production of carbon dioxide must increase with time, a finding that goes against the conventional wisdom that carbon fluxes and atmospheric carbon dioxide levels have steadily decreased over the last 4 billion years.

"The change in flux described by our model happens over extremely long time periods, and it would be a mistake to think that these processes that are bringing about any of the atmospheric changes are occurring due to anthropomorphic climate change," he said. "However, our work does suggest that Earth scientists and astrobiologists may need to revisit what we think we know about Earth's early history."

This work is the result of an ongoing study of the global carbon cycle funded by the National Science Foundation and administered by Rice University.

This release can be found online at news.rice.edu.

Located on a 300-acre forested campus in Houston, Rice University is consistently ranked among the nation's top 20 universities by U.S. News & World Report. Rice has highly respected schools of Architecture, Business, Continuing Studies, Engineering, Humanities, Music, Natural Sciences and Social Sciences and is home to the Baker Institute for Public Policy. With 3,910 undergraduates and 2,809 graduate students, Rice's undergraduate student-to-faculty ratio is 6-to-1. Its residential college system builds close-knit communities and lifelong friendships, just one reason why Rice is ranked No. 1 for best quality of life and for lots of race/class interaction by the Princeton Review. Rice is also rated as a best value among private universities by Kiplinger's Personal Finance. To read "What they're saying about Rice," go to http://tinyurl.com/RiceUniversityoverview. Caption: This is a view of Earth's atmosphere taken from the International Space Station in 2003. 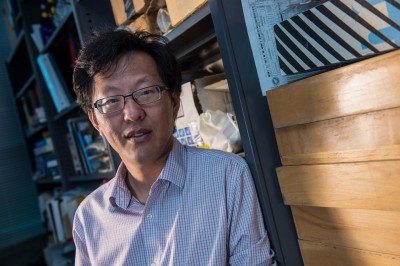 Caption: This is Cin-Ty Lee.