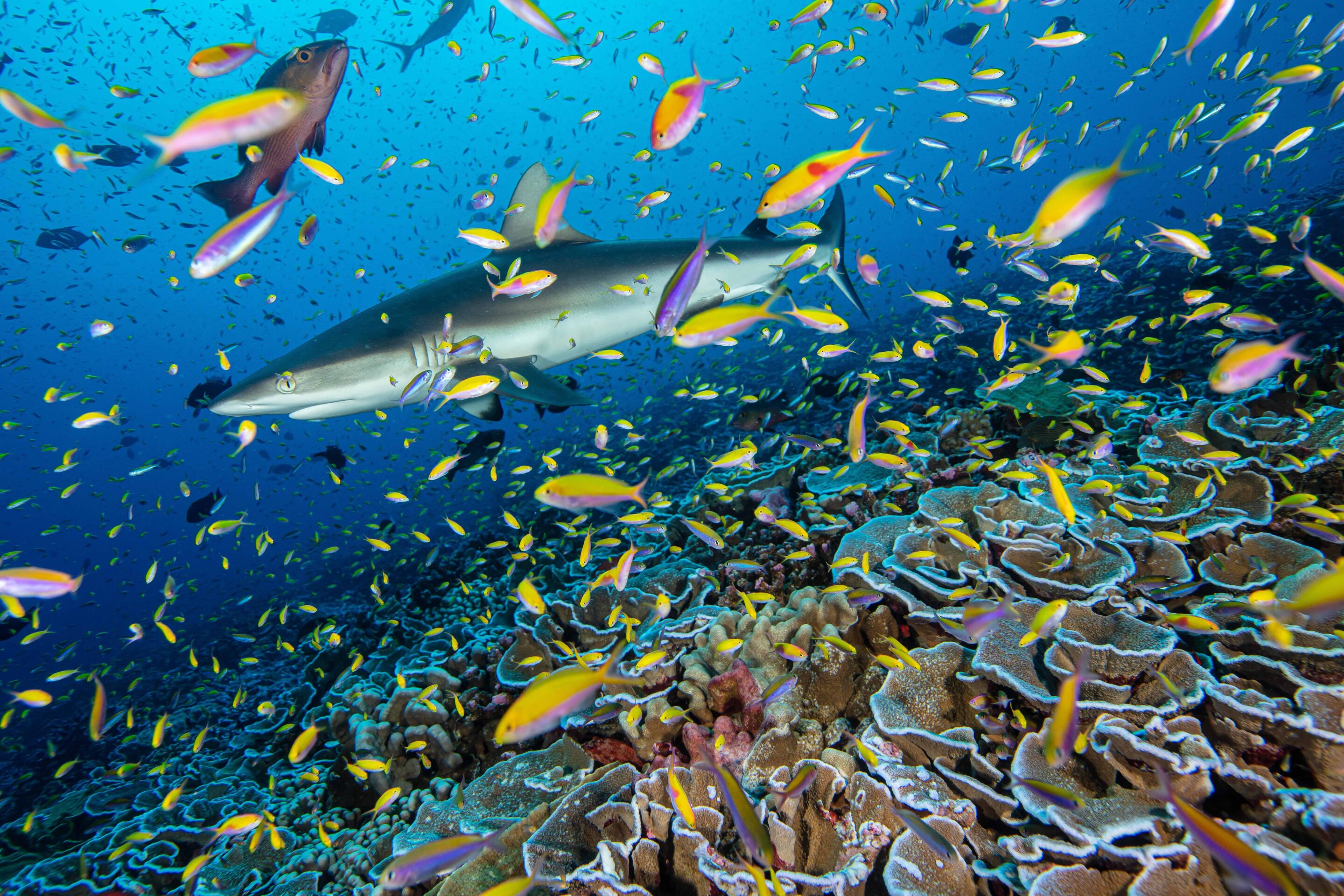 Study finds that remote ocean wilderness areas are sustaining fish populations much better than some of the world’s best marine reserves.

Newswise — A new, widespread study of the global state of marine coral reef wilderness by WCS, NGS, and university collaborators found that remote ocean wilderness areas are sustaining fish populations much better than some of the world’s best marine reserves. Findings show that remote reefs protect three times as many stocks as marine reserves, and shelter many important and threatened species that require large spaces, like sharks, groupers, jacks, and snappers.

Marine wilderness is rapidly disappearing in the face of widespread fishing. Scientists examined coral reefs located 4-plus hours from people and 9-plus hours travel distances from urban markets. They found that the mean biomass of fish stocks in those remote wilderness areas was about one third higher than the values found in even the best-managed, oldest, and largest marine reserves located nearer shore to people.

A recent initiative by the global community, “30x30” seeks to protect and conserve at least 30 percent of the land and sea by 2030. Progress toward this goal is underway, but currently as little as 2 percent of coral reefs are being fully protected in marine reserves. These findings suggest that what authors termed “best-practice seascapes” need to be deployed alongside ocean wilderness strongholds to truly achieve global security for coral reef fish biodiversity.

“This study confirmed that wilderness areas protect fish far better than even the most sustainable fisheries and reserves,” said lead author Dr. Tim McClanahan, Senior Scientist for the Wildlife Conservation Society. “It scares us to think what is being lost when wilderness is reduced. The findings are a call to designate the last remaining marine wilderness as areas needing special status and protection – global ocean strongholds. To ensure that all coral reef fish species are protected from fishing and possible extinction, we need to focus on wilderness alongside 30 percent closures in nearshore areas.”

While the focus on 30 percent coverage of marine reserves is ongoing, the need to also find and protect marine wilderness remains a high priority. Findings show that the two approaches complement each other well, as marine reserves protect more resilient species while wilderness protects space-requiring species. Previous studies have shown that many ecoregions lack wilderness, and this could result in the losses of important species with large space requirements. Protection of wilderness areas needs to be coupled with active conservation interventions to truly make an impact.

Alan Friedlander of Pristine Seas said “Observing and surveying fishes for many years has made it clear to me that many, and particularly big fishes, require lots of space to survive and thrive. This collaboration and analyses with my colleagues have made it clear how this need for open marine wilderness is so pervasive. This robust and extensive dataset has allowed us to confirm what many of us have observed for year, that remote marine wilderness are like time machines that allow us to observe the ocean of the past in order to protect the future.”

MISSION: WCS saves wildlife and wild places worldwide through science, conservation action, education, and inspiring people to value nature. To achieve our mission, WCS, based at the Bronx Zoo, harnesses the power of its Global Conservation Program in nearly 60 nations and in all the world’s oceans and its five wildlife parks in New York City, visited by 4 million people annually. WCS combines its expertise in the field, zoos, and aquarium to achieve its conservation mission. Visit: newsroom.wcs.org. Follow: @WCSNewsroom. For more information: +1 (347) 840-1242.