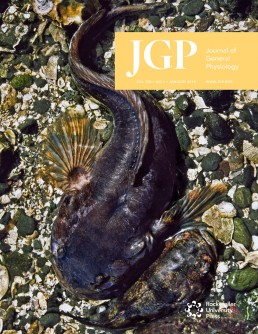 The cover of the January 2018 issue of the Journal of General Physiology shows a large, type I male midshipman fish and its smaller, female mate.

Newswise — Researchers at the University of Pennsylvania have discovered how the Pacific midshipman fish can hum continuously for up to an hour in order to attract potential mates. The study, which is featured on the cover of the January 2018 issue of the Journal of General Physiology, explains how the muscle fibers surrounding the fish’s swimbladder can sustain the high rates of contraction—up to 100 times per second—that are needed to produce the animal’s distinctive call.

It can be difficult to find a mate within the dark and cloudy waters of the ocean, so the males of several fish species have evolved the ability to emit loud calls that can attract potential female partners to their nest. These mating calls are generated by superfast muscle fibers that surround the fishes’ swimbladders and undergo rapid cycles of contraction and relaxation in order to make these gas-filled organs vibrate.

Male Atlantic toadfish, for example, contract and relax their swimbladder muscles up to 100–200 times per second to produce short, repetitive “boatwhistle” calls interspersed with relatively long periods of silence. Type I males of the Pacific midshipman fish (Porichthys notatus) are even more remarkable, producing a continuous mating hum for as long as an hour (you can hear a brief snippet in this video). At a rate of 100 contractions and relaxations per second, the midshipman swimbladder muscle can therefore contract as many as 360,000 times over the course of an hour-long call. “The midshipman swimbladder muscle generates more contractions per hour than any other known vertebrate muscle, explains Lawrence C. Rome, Professor of Biology at the University of Pennsylvania.

Muscle contractions are triggered by calcium ions that are released from intracellular storage sites into the cytoplasm of muscle fibers in response to nerve impulses. Typically, these calcium ions are then pumped back into storage, allowing the muscle to relax before it receives any further nerve impulses, but fish swimbladder muscles contract too quickly for this pumping phase to be completed before the next contraction begins.

The Atlantic toadfish solves this problem, in part, by producing large amounts of a protein called parvalbumin that can mop up excess calcium from the muscle cytoplasm. These calcium ions can then be slowly pumped back into storage during the silent periods that punctuate the toadfish’s calls.

The Pacific midshipman doesn’t produce as much parvalbumin, however, and, even if it did, the fish’s continuous call would soon overwhelm the protein’s calcium-binding capacity. “The question then remains: How does the midshipman manage its calcium during its continuous calls?” Rome asks.

Rome and colleagues therefore measured the amount of calcium released and pumped by midshipman swimbladder muscles as they repeatedly contract and relax. The researchers found that, as in the Atlantic toadfish, midshipman muscles only contract once per nerve impulse. This contrasts with nature’s most extreme case of repetitive muscle action, the high frequency flight muscles of bees and other insects, which contract multiple times in response to a single impulse.

Crucially, however, midshipman muscles release approximately eight times less calcium than toadfish muscles in response to single nerve impulses. Thus, to sustain an hour-long mating call, the midshipman muscle releases, and subsequently pumps, only two times as much calcium as the toadfish uses to make intermittent calls over the same time period.

“The small amount of calcium released per stimulus is the key element that permits the calcium pumps in midshipman swimbladder muscle to keep up over long periods of high-frequency stimulation,” Rome explains. Moreover, because calcium pumping requires energy, the low levels of calcium release also lower the metabolic demands of making a continuous, hour-long mating call.

Rome and colleagues also found that, on average, the proteins that pump calcium out of the cytoplasm and into storage operate faster in midshipman muscles than their equivalents in toadfish. “The combination of fast calcium pumping and small calcium release permits the midshipman to maintain the correct balance of calcium ions during its long-lasting mating call,” Rome says. However, he adds, it remains to be seen how such low calcium levels cause the swimbladder muscle to contract with sufficient force to generate the midshipman’s distinctive hum.

About the Journal of General Physiology The Journal of General Physiology (JGP) features peer-reviewed research in biological, chemical, or physical mechanisms of broad physiological significance, with an emphasis on physiological problems at the cellular and molecular level. All editorial decisions are made by research-active scientists in conjunction with in-house scientific editors. JGP provides free online access to many article types from the date of publication and to all archival content. Established in 1918, JGP is published by Rockefeller University Press. For more information, visit jgp.org.