The above model shows meltwater released from the Columbia River (bright blue) flowing north towards Alaska in narrow coastal boundary currents. The meltwater, which is less salty or "fresher" than the surrounding water, continues west, reaching Japan after just one year before recirculating eastwards towards the west coast of North America. In just three years, the entire subpolar North Pacific ocean has become "fresher" as a result of the floods, although the exact amount would have been dependent on the size of each flood event, which varied through time. 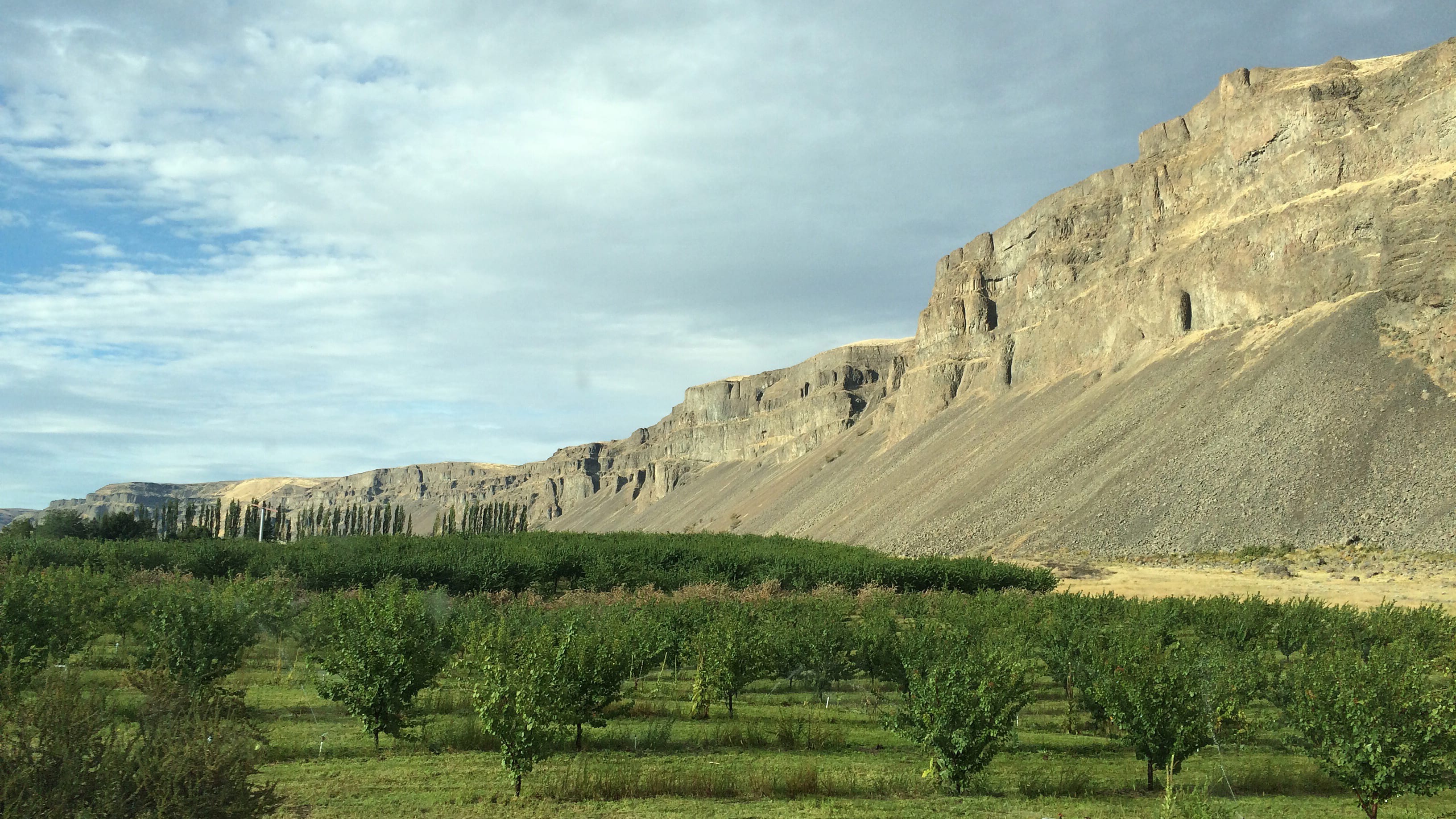 View of one of the canyons in Washington state, U.S., where the enormous Missoula floods once drained through as they flowed to the Pacific ocean. These steep walls were carved as floods plucked away at columnar basalt. 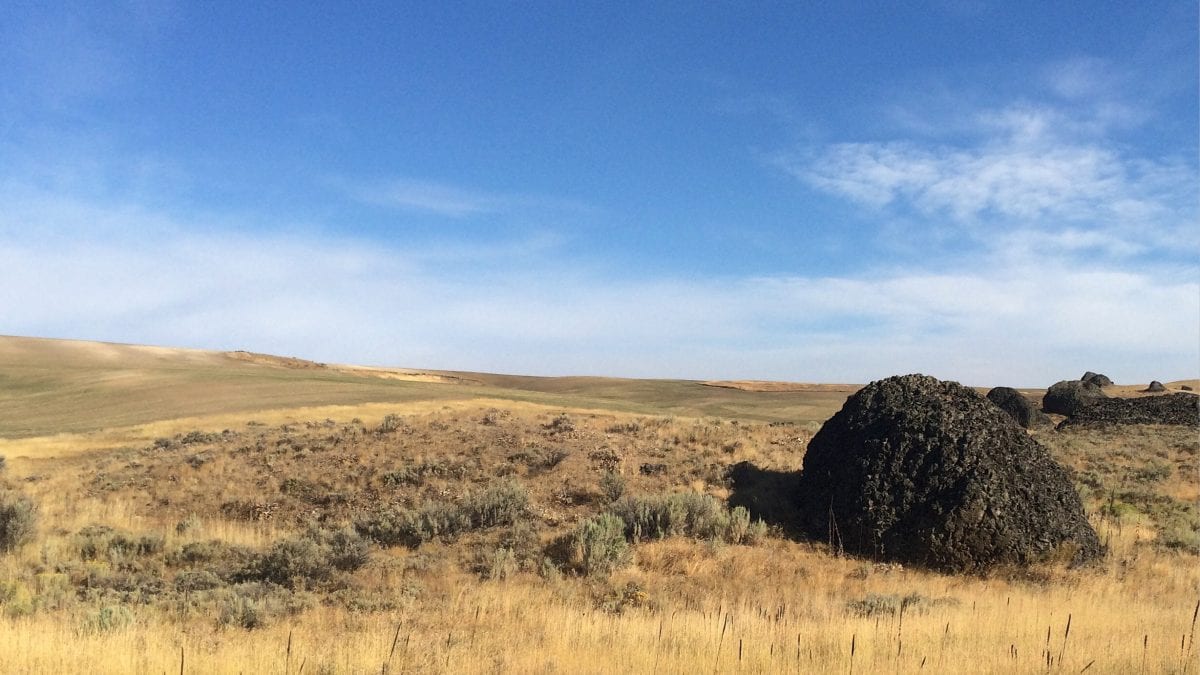 Huge boulders carried by the Missoula Floods were left stranded across the Pacific Northwest.

Colleagues show for the first time how massive flood events in the eastern North Pacific Ocean—known as the Missoula Floods—may have in part triggered abrupt climate changes in the Northern Hemisphere during the last deglaciation (approximately 19,000–11,700 years ago). The findings, published Feb. 26, 2020, in the journal Science Advances, are contrary to the long held notion that cooling was primarily driven by changes in North Atlantic circulation.

“Everyone’s been searching for evidence of floods into the North Atlantic that might have caused various cooling events, but very little has been done to investigate whether the Missoula Floods had any impact beyond the Pacific Northwest,” says lead author Summer Praetorius, a Research Geologist with the U.S. Geological Survey and former WHOI research assistant.

Sedimentary deposits on land indicate that the Missoula Floods occurred nearly 100 times during the first part of deglaciation as former Glacial Lake Missoula in Montana repeatedly filled and drained enormous volumes of freshwater down the modern-day Columbia River, into the northeastern Pacific Ocean.

“The peak discharge of water during these flood events would have been equivalent to the flow of 85 Amazon Rivers,” says Alan Condron, a climate scientist at WHOI and coauthor of the paper. “In fact, these floods were the largest on Earth, dwarfing outburst floods from the Laurentide ice sheet that have frequently been proposed as major triggers of abrupt deglacial climate change, but little is known about what happened once the waters entered the Pacific Ocean.”

In this study, Praetorius and Condron, along with collaborators Alan Mix, Maureen Walczak, Jennifer McKay and Jianghui Du from Oregon State University, show for the first time the trajectory of Missoula Flood waters exiting the Columbia River.

Using Condron’s high-resolution climate model, they found that meltwater flowed across the North Pacific following coastal boundary currents and ultimately made it as far east as Japan, where it was incorporated into the Kuroshio Current—the Pacific equivalent of the Gulf Stream current.

While the largest of the Missoula Floods occurred when sea levels were much lower than today due to water being locked up in large ice sheets, the final Missoula floods occur close to the time when the Bering Strait land bridge between Russia and Alaska was finally submerged by rising sea level and Pacific waters entered the Arctic. To account for this, Condron also ran his climate model with the Bering Strait open, much like modern day to trace the water’s route in both scenarios.

“We were excited and surprised to find that when the Bering strait land bridge was submerged,  floodwaters from Glacial lake Missoula flowed through the Arctic Ocean to the North Atlantic where processes controlling the strength of the Gulf Stream and transport of heat to Europe and North America take place,” says Condron. “Basically this is the region of the ocean that seems capable of triggering large-scale climate change.”

The precise timing of when the Bering Strait opened is still a matter of some debate and on-going research, Condron notes, but is does demonstrate a possible connection between Pacific meltwater and the North Atlantic that was not known before.

In order to assess the evidence for how Missoula flood events may have impacted ocean circulation and climate, the researchers compiled an extensive collection of data from fossil plankton in marine sediment cores throughout the Northeast Pacific to reconstruct changes in sea surface temperature, sea surface salinity, and deep-water circulation.

The compilation shows that there were two major periods of ocean freshening (a decrease in salinity) and cooling during the last deglaciation. The first was early in the deglaciation, at about the same time the largest of the Missoula floods occurred. Curiously, this was a time of cooling in the Northern Hemisphere that has previously been attributed to a massive release of icebergs to the North Atlantic. Recent evidence suggesting that the icebergs drifted into the North Atlantic after the cooling had already started though has meant the cause of the cooling is still a mystery. Praetorius, Condron and colleagues now point to the Missoula Floods as a possible cause of this early cooling event.

Similarly, the team found a second interval of ocean cooling and freshening during the Younger Dryas period—an abrupt cooling period in the Northern Hemisphere that has a long history of contentious debate on its causes. Some scientists say it was floods into the Atlantic that caused the cooling, some say it was a comet impact, and now Praetorius and collaborators are adding a new twist.

Condron notes that the results are quite humbling as the geologist, J Harlen Bretz, who first recognized in the 1920’s that these floods shaped the landscape of the Pacific northwest, was initially derided by the geological community as his findings were considered ‘preposterous’ and ‘incompetent.’

“Yet, close to 100 years on, our results suggest that meltwater into the Pacific may have also played a role in the climate shift,” he adds.

These findings highlight the importance of changes in North Pacific circulation as an integral player in deglacial climate events.

Funding for this work was provided by the National Science Foundation. Numerical model simulations were run in-house at WHOI on the new HPC resource, Poseidon.

Caption: View of one of the canyons in Washington state, U.S., where the enormous Missoula floods once drained through as they flowed to the Pacific ocean. These steep walls were carved as floods plucked away at columnar basalt.

Caption: Huge boulders carried by the Missoula Floods were left stranded across the Pacific Northwest.