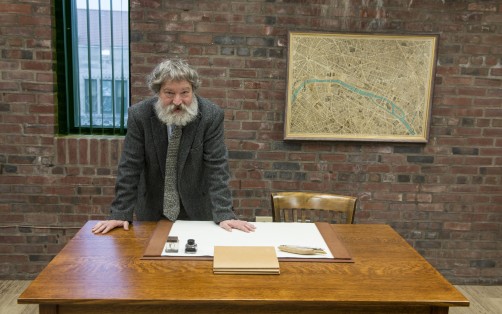 Raymond Pierrehumbert is the Louis Block Professor in Geophysical Sciences at the University of Chicago, and holder of the King Carl XVI Gustaf Chair in Environmental Sciences at Stockholm University for 2014-2015. His latest study, published in Annual Review of Earth and Planetary Sciences, indicates that reducing CO2 emissions is essentially the only way to address climate change.

Newswise — The politically expedient way to mitigate climate change is essentially no way at all, according to a comprehensive new study by University of Chicago climatologist Raymond Pierrehumbert.

Among the climate pollutants humans put into the atmosphere in significant quantities, the effects of carbon dioxide (CO2) are the longest-lived, with effects on climate that extend thousands of years after emissions cease. But finding the political consensus to act on reducing CO2 emissions has been nearly impossible. So there has been a movement to make up for that inaction by reducing emissions of other, shorter-lived gasses, such as methane, hydrofluorocarbons, and nitrous oxide, and particulates such as soot and black carbon, all of which contribute to warming as well.

Pierrehumbert ’s study shows that effort to be, as he puts it, a delusion. “Until we do something about CO2, nothing we do about methane or these other things is going to matter much for climate,” he said. Pierrehumbert is the Louis Block Professor in Geophysical Sciences at UChicago, and holder of the King Carl XVI Gustaf Chair in Environmental Sciences at Stockholm University for 2014-2015. His study, published in Annual Review of Earth and Planetary Sciences, brings together findings from the scientific literature with new research and analysis. Its conclusions are clear.

“Ray convincingly shows the benefit and importance of doing everything we can to lower CO2 emissions, and as soon as possible,” said Katherine H. Freeman, professor of geosciences at Pennsylvania State University. “We should lower short-lived pollutants like methane too. But, as he makes clear, we should not let them distract us from the urgent need to stop burning fossil fuels.” The basic physics of climate pollutants has been well known for a long time. The warming effect of methane and other short-lived climate pollutants disappears quite quickly after the pollutants are removed from the atmosphere. When you remove them, you get a one-time-only, lump-sum benefit. CO2, on the other hand, lingers in the atmosphere. And if you are still emitting CO2 while you are reducing methane and its fellows, that additional CO2 continues to affect the climate for thousands of years.

Perhaps as a result of wishful thinking, the policy implications of those facts had become confused, said Pierrehumbert. Part of the problem is that the statistical tool used to compare the climate effect of gasses is badly flawed. The measure, called Global Warming Potential (GWP), predicts the effect on climate by comparing the emission rate of carbon dioxide with the emission rate of methane. But a one-ton-per-year reduction in the amount of methane emitted translates into a single lowering of the global thermostat, while a one-ton-per-year reduction in CO2 yields a climate benefit that increases over time. That’s because each extra ton of CO2 that would have been emitted would have irreversibly ratcheted up the global thermostat by an additional increment. Despite its well-known defects, GWP has been used since 1990 and was incorporated into the Kyoto Protocols in the climate-trading schemes implemented by Europe. Pierrehumbert proposes a different metric, which looks at the climate effect of reducing CO2 emission by a fixed number of tons and then finds the rate by which you have to reduce methane emissions to get the same effect. Pierrehumbert’s study doesn’t propose a single “right” policy on climate change, said Richard Alley, Evan Pugh Professor of Geosciences at Penn State. “But it is a very useful analysis that will be viewed carefully by people who are interested in making good policies, and the main conclusions will help inform those policies.” Pierrehumbert himself hopes that his work will help lead policymakers to abandon Kyoto-style multi-gas trading schemes, which treat the gasses equivalently, and put the emphasis on CO2 for the next 50 years or so. “I see puncturing the excessive enthusiasm about short-lived climate pollution control as a step in the right direction,” he said, “because it takes away one of the grounds for procrastination on CO2. If you’re serious about protecting climate, it’s the CO2 you’ve got to deal with first.” — Carla Reiter