After trying two other options and failing to get relief, ECT could provide cost-effective option, according to U-M researchers’ analysis 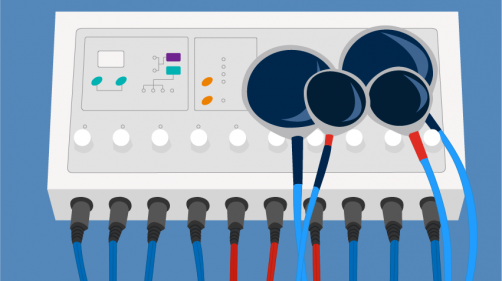 An illustration of the device used to deliver the mild, brief electrical impulses used in ECT treatment for depression.

But a new study suggests that the modern form of the approach -- called ECT --should be made more available to patients who fail to get relief from two other types of treatment, such as antidepressant medications and talk therapy.

The study, published in JAMA Psychiatry by a team from the University of Michigan Department of Psychiatry, looks at the cost-effectiveness of ECT. Its findings could inform depression care decisions by insurers and policy makers, as well as conversations between doctors and patients.

The researchers used data from recent, highly regarded clinical studies to create a simulation of patients’ potential journeys through many depression treatment strategies.

Short for electroconvulsive therapy, ECT delivers brief, mild electrical impulses to the brain under short-term anesthesia. Although it may require more specialized care, opting for ECT as a third-line option could be cost-effective compared to other treatments, and it may significantly reduce the time that patients spend with depression symptoms, the study finds.

“Although choosing a depression treatment is a very personal choice that each patient must make with their physician based on their preferences and experience, our study suggests that ECT should be on the table as a realistic option as early as the third round of care,” says lead author Eric L. Ross, a U-M Medical School student who will graduate with his M.D. just after the paper’s publication and enter a psychiatry residency program this summer.

“ECT is often considered a last resort by patients and providers,” says senior author Daniel Maixner, M.D. “Unfortunately, research shows that with multiple medication failures and long duration of illness -- sometimes many years -- the chance that patients can achieve remission drops quickly to very low numbers. ECT is the best treatment to produce remission. So, in addition to the clinical idea that ECT should be used sooner, our study adds another perspective highlighting that ECT is also cost-effective earlier in the treatment course of depression.” Maixner, an associate professor of psychiatry at U-M, directs the ECT program at Michigan Medicine, U-M’s academic medical center.

Ross and Maixner worked on the study with Kara Zivin, Ph.D., an associate professor of psychiatry, mental health services researcher and member of the U-M Institute for Healthcare Policy and Innovation, and the Veterans Affairs Center for Clinical Management Research.

In 2011, Zivin, Maixner and their U-M and VA colleagues showed that just 0.16 percent of VA patients who had depression nationwide received ECT. Their study also revealed wide variations in use of ECT by region, and by the race and medical health status of the patient. Other more recent studies have shown that patients receive ECT only after trying five to seven different antidepressants, and other medications.

Ross brought his experience in cost-effectiveness research to the project. He and his colleagues created a model that used data from the gold-standard national STAR*D study of drug- and psychotherapy-based depression treatment, and from randomized controlled studies and observational studies of ECT’s initial effects, long-term maintenance and risk of relapse.

The model also used data from ECT clinical trials. It took a conservative approach based on those findings that assumed that half of patients who try ECT would get immediate and full relief, also called remission, though one-third might relapse after a year. ECT treatment regimens start with multiple sessions in the first few weeks, followed often by a brief or longer-term maintenance schedule.

The U-M team’s model suggests that instead of spending half of the four years after diagnosis with active depression symptoms, patients could be symptom-free two-thirds of the time.

The study predicts ECT as a third-line treatment would have an incremental cost-effectiveness ratio of $54,000 per quality-adjusted life year. This ratio, which measures the value received for the dollars spent to restore patients’ quality of life, falls well below the $100,000 threshold usually considered worthwhile for health spending. The cost-effectiveness analysis focused on health care related costs, and did not take into account lost productivity by the individual due to depression, or time or travel costs for ECT or clinic appointments.

Ross notes that the team had not expected ECT to come out as cost-effective for third-line use – they had expected this to be true for fifth- to sixth-line treatment. The findings suggest that if patients and physicians decide to try a third, fourth or fifth antidepressant or psychotherapy course, or combinations of medicine and therapy before they opt for ECT, the latter would will still be most cost-effective the sooner they decide to try it.

The new findings might also help physicians make the case to patients’ insurers that ECT should be covered earlier in a treatment-resistant depression patient’s course, Zivin notes.

“Coverage for ECT varies widely, and it’s not clear why it should, since it’s one of the most effective treatments we have,” she says. “We shouldn’t allow the stigma attached to the past incarnations of this approach to prevent its modern form from being seriously considered for appropriate patients. Increased coverage could also help address the widespread ECT service-area gaps that we’ve found in other research.”

The study was funded by Zivin’s grant from Veterans Affairs Health Services Research and Development Services.