Newswise — "Resilience" is a buzzword often used in scientific literature to describe how animals, plants and landscapes can persist under climate change. It's typically considered a good quality, suggesting that those with resilience can withstand or adapt as the climate continues to change. But when it comes to actually figuring out what makes a species or an entire ecosystem resilient ― and how to promote that through restoration or management ― there is a lack of consensus in the scientific community. A new paper by the University of Washington and NOAA's Northwest Fisheries Science Center aims to provide clarity among scientists, resource managers and planners on what ecological resilience means and how it can be achieved. The study, published this month in the journal PLOS ONE, is the first to examine the topic in the context of ecological restoration and identify ways that resilience can be measured and achieved at different scales. "I was really interested in translating a broad concept like resilience into management or restoration actions," said lead author Britta Timpane-Padgham, a fisheries biologist at Northwest Fisheries Science Center who completed the study as part of her graduate degree in marine and environmental affairs at the UW.

"I wanted to do something that addressed impacts of climate change and connected the science with management and restoration efforts."

Timpane-Padgham scoured the scientific literature for all mentions of ecological resilience, then pared down the list of relevant articles to 170 examined for this study. She then identified in each paper the common attributes, or metrics, that contribute to resilience among species, populations or ecosystems. For example, genetic diversity and population density were commonly mentioned in the literature as attributes that help populations either recover from or resist disturbance.

Timpane-Padgham along with co-authors Terrie Klinger, professor and director of the UW's School of Marine and Environmental Affairs, and Tim Beechie, research biologist at Northwest Fisheries Science Center, grouped the various resilience attributes into five large categories, based on whether they affected individual plants or animals; whole populations; entire communities of plants and animals; ecosystems; or ecological processes. They then listed how many times each attribute was cited, which is one indicator of how well-suited a particular attribute is for measuring resilience.

"It's a very nice way of organizing what was sort of a confused body of literature," Beechie said. "It will at least allow people to get their heads around resilience and understand what it really is and what things you can actually measure."

The researchers say this work could be useful for people who manage ecosystem restoration projects and want to improve the chances of success under climate change. They could pick from the ordered list of attributes that relate specifically to their project and begin incorporating tactics that promote resilience from the start.

"Specifying resilience attributes that are appropriate for the system and that can be measured repeatably will help move resilience from concept to practice," Klinger said.

For example, with Puget Sound salmon recovery, managers are asking how climate change will alter various rivers' temperatures, flow levels and nutrient content. Because salmon recovery includes individual species, entire populations and the surrounding ecosystem, many resilience attributes are being used to monitor the status of the fish and recovery of the river ecosystems that support them.

The list of attributes that track resilience can be downloaded and sorted by managers to find the most relevant measures for the type of restoration project they are tackling. It is increasingly common to account for climate change in project plans, the researchers said, but more foresight and planning at the start of a project is crucial.

"The threat of climate change and its impacts is a considerable issue that should be looked at from the beginning of a restoration project. It needs to be its own planning objective," Timpane-Padgham said. "With this paper, I don't want to have something that will be published and collect dust. It's about providing something that will be useful for people."

No external funding was used for this study. 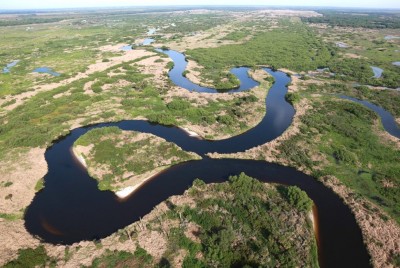 Caption: The Kissimmee River in central Florida. This ecosystem-scale restoration project began two decades ago and is used as an example in the study. 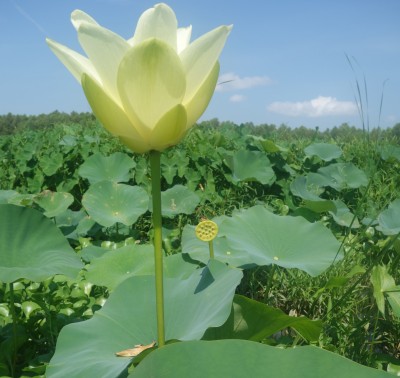 Caption: Lotus flowers on a delta island on the outer reaches of the Mississippi delta, which is in danger of drastically shrinking or disappearing. The islands are actually quite resilient, as seen in part by the vegetation growth.