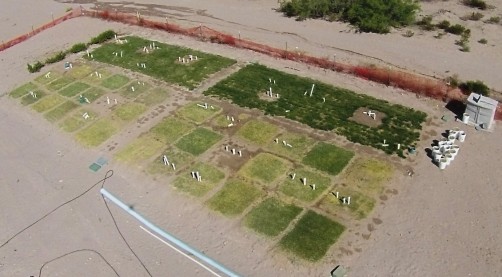 ReNUWIt turfgrass test plots at New Mexico State University. Cool-season tall fescue (top row) and warm-season grasses bottom half. Grasses irrigated with tailored water on right side, plots on the left side are irrigated with potable water and fertilized with calcium nitrate.

Newswise — In Santa Fe, Albuquerque, and other major cities in New Mexico, nearly every public golf course is now watered with treated municipal wastewater rather than precious potable water supplies. Across the U.S. Southwest as a whole, more than 40% of all golf courses receive treated effluent. Reusing the effluent increases the sustainability of golf courses.

Additionally, golf courses and homeowners alike fertilize their lawns during the growing season. The major nutrient in fertilizer is nitrate. A New Mexico State University turfgrass expert has a new vision for even more efficiency.

Leinauer says combining the three approaches could solve several issues. Right now, many big New Mexico cities remove nearly all the nitrate from wastewater all the time. That’s an expensive and energy-intensive step designed to prevent pollution of surface- and ground- waters. “But from a turf perspective that doesn’t make a whole lot of sense,” Leinauer says, since golf course managers (and homeowners) end up applying mineral nitrate fertilizers to keep turf thriving.

Fertigation is a method of supplying fertilizers to plants through irrigation water (fertilize and irrigate at the same time). Drip irrigation delivers water directly to plant roots underground, instead of sprinkling plants from above.

In Leinauer’s and Sevostianova’s vision, a decentralized treatment system at a subdivision would be “tailored” to generate effluent during the summer that contained 15 parts per million (ppm) of the nutrient nitrate. Residents would then use this water to fertigate their lawns. Because drip systems put water directly into the soil, Leinauer says, homeowners wouldn’t come in contact with it.

“Why not leave the nitrate in the water?” Leinauer asks, “Then the effluent already contains a fertilizer that the golf course operator [or homeowner] doesn’t have to buy” or manage. The tailored water from the decentralized treatment system makes this feasible. “The overall idea is to combine subsurface, drip irrigation with tailored water: water with nutrient levels tailored for the summer versus the winter.”

Will re-using this high-nitrate content water cause problems? Will the nitrate seep into the subsoil, and eventually to groundwater? Leinauer is now studying this at a test facility.

So far, results are good. Turf plots drip-irrigated with tailored water are just as green and healthy as those receiving potable water and mineral fertilizers, Leinauer says. The researchers also see little evidence of greater nitrate loss from the fertigated, drip-irrigated plots.

Still, he cautions, the results are preliminary and there are other challenges to address. For example, wastewater effluent tends to be high in salt. These problems must be solved, though, as water supplies continue to decline. In New Mexico, for example, demands on potable water from agriculture and a growing populace are so great that “basically the only water left for the landscape is treated effluent,” Leinauer says. But the issue is hardly unique to his region. Leinauer hopes researchers around the country will embark on similar studies.

“We’re doing our part here in the Southwest, but our region is completely different from, let’s say, New England, or the Midwest,” he says. “So, these questions need to be investigated more thoroughly on a regional basis.”