Targeted MRI Could Pinpoint Aggressive Prostate Cancers Before They Spread

10-May-2017 3:05 PM EDT, by National Institute of Biomedical Imaging and Bioengineering
favorite_border 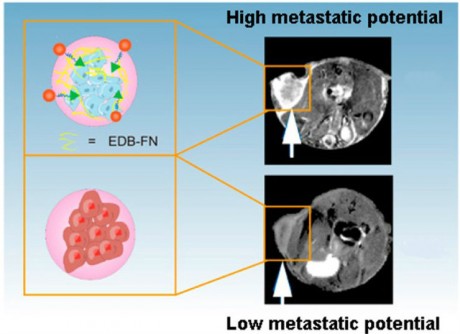 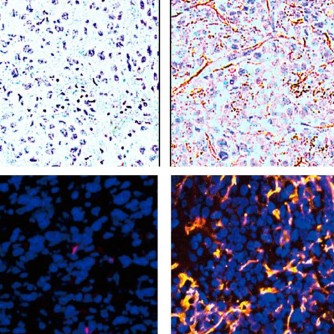 Newswise — A research team funded by the National Institute of Biomedical Imaging and Bioengineering has engineered a small peptide that binds to a protein found in high-risk prostate cancers. By linking the peptide to a clinically used MRI contrast agent, the group used MRI to identify aggressive, metastatic tumors in mouse models of prostate cancer. The system is a promising step for reliable early detection and treatment of high-risk, life-threatening prostate cancer.

Treatment of prostate cancer remains a tricky endeavor for physicians because of the dramatic differences in prostate tumors. Although the common disease strikes one in seven men, only about 20% of those with prostate cancer have a life-threatening tumor needing aggressive treatment. The other 80% have slow growing tumors that require little to no treatment.

As Guoying Lu, Ph.D., director of the NIBIB program in Magnetic Resonance Imaging, explained “The key is to differentiate clinically significant, high-risk tumors that need treatments from those low-risk tumors that do not require treatment, which will spare many patients from unnecessary, expensive, and invasive procedures."

Now, Zheng-Rong Lu, Ph.D., the M. Frank Rudy and Margaret Domiter Rudy professor of biomedical engineering at Case Wetern Reserve University, and his colleagues at Molecular Theranostics, and the Cleveland Clinic Foundation in Ohio, have developed a novel system to non-invasively identify the prostate tumors harboring the aggressive, life-threatening cancer cells. The work is presented in the April issue of Bioconjugate Chemistry.

The group identified a cancer-causing oncoprotein, known as extradomain B fibronectin (EDB-FN), and found that it is expressed at high levels by aggressive prostate tumor cells. This finding was consistent with the previously described role of EDB-FN in promoting aggressive cancers that are resistant to chemotherapy and also metastasize—move through the outer layers of affected organs, including the prostate, and into surrounding tissues.

Having shown that the ZD2 peptide specifically binds EDB-FN, the group engineered ZD2 so it could be used to non-invasively detect high-grade prostate cancers in a mouse prostate cancer model.

The researchers chemically attached a clinically used MRI contrast agent--a gadolinium (Gd) compound--to ZD2. Gadolinium is an element with magnetic properties that cause it to produce a strong signal detectable by MRI. The resulting test molecule was ZD2-Gd—the peptide that binds to the cancer cells linked to the gadolinium compound, and which is easily detected using MRI.

The tests in the mouse models revealed that a significant amount of ZD2-Gd rapidly bound to the grafted aggressive prostate tumors to produce a strong MRI signal within 10 minutes following injection of ZD2-Gd into the bloodstream of the mice. Conversely, little to no MRI signal was detected in the mouse models carrying the low-grade prostate tumor cells.

Although gadolinium is currently used routinely in humans, there has been some concern recently about residual amounts of it remaining in the system when used as an MRI contrast agent—and potentially having toxic side-effects. Therefore, the researchers looked at the clearance of ZD2-Gd from the mouse after injection and found it to be similar to a standard Gd contrast agent (Gd not bound to a targeting peptide). This was significant because it was important to know if ZD2 would also happen to bind to other mouse tissues and thus cause a slower clearance.

The researchers also examined all of the mouse tissues one week after the experiment and did not find residual gadolinium, indicating that ZD2-Gd did not “stick” to any other healthy tissues and remain in the mouse.

The authors concluded that the combination of a strong, specific signal in high-risk tumors combined with minimal residual body accumulation were excellent early results. They are hopeful that their system has real potential as a solution for non-invasively determining which men have aggressive cancers in need of treatment, and which have slow-growing tumors and can avoid unnecessary invasive treatments. In addition, the system could also be used to routinely and non-invasively monitor the slow-growing group for any changes in the aggressiveness of their tumors over time.

Adds senior author, Zheng-Rong Lu, “Not only does ZD2-Gd bind specifically to the high-grade prostate cancer cells, but it binds so well that it can detect even early stage tumors of small numbers of these cells. This means we can potentially use MRI to non-invasively find those individuals with the high-grade tumors and find them early when treatment has a much higher chance of being effective.”