Teens share stories to deter other students from using tobacco

25-Sep-2019 11:30 AM EDT, by University of Texas Health Science Center at Houston
favorite_border 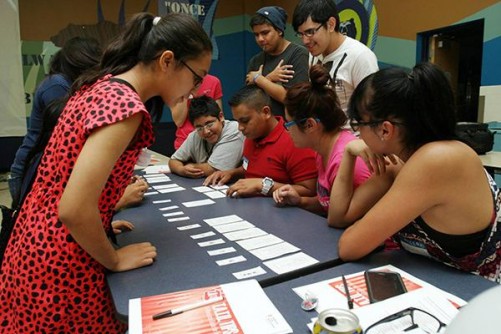 Students participate in a group activity for Teens Against Tobacco Use, a tobacco prevention program in El Paso, Texas.

Newswise — An innovative strategy called Teens Against Tobacco Use showed promise as an effective strategy to deter tobacco use in middle and high school students, according to a research study by The University of Texas Health Science Center at Houston (UTHealth) School of Public Health.

The study appeared today in the American Journal of Preventive Medicine.

“The most important takeaway message is that Teens Against Tobacco Use is a promising model in tobacco prevention,” said senior author Louis Brown, PhD, assistant professor of health promotion and behavioral sciences at UTHealth School of Public Health in El Paso, Texas.

Brown worked with the El Paso Independent School District to bring the tobacco prevention program to El Paso’s teens with the help of the nonprofit Paso del Norte Health Foundation.

As part of the project, high school and middle school youth were trained to develop and present tobacco prevention messages to students in fourth through eighth grade in nine schools serving predominantly low-income Hispanic students in central El Paso. A total of 2,257 students took part in the evaluation. Classrooms were matched, with one classroom receiving the presentation first and the matched classroom receiving the presentation later, after the program had been evaluated.

Teachers from participating schools provided sample activities and coaching, but the students put together their own presentations. Some were particularly moving because they were taken from real life.

One student described growing up in a smoking household with the smell of tobacco smoke in her hair and clothes. Once someone had doused a cigarette butt in an open soda can, which she discovered when she took a drink. Another presenter described how his mother’s smoking during pregnancy stunted his growth.

After sharing their stories, presenters were successful in getting many children in the classrooms to talk about smokers in their families, many of whom had chronic illnesses or had died because of the habit.

The students in the program took their advocacy further, speaking to the city council about a clean air ordinance.

“Their message was very persuasive, in part because of their passion, but also because adults are supposed to protect the health of our youth,” said Brown. The city council passed the ordinance the students supported.

Students also did a cleanup event at a city park, flagging the places they found cigarette butts to highlight the problem of tobacco litter on playgrounds.

The program continued for three years, said Brown, and they are seeking funding to start it again.

Others who took part in the study were Frank C. Bandiera, PhD, a social and behavioral scientist administrator with the National Institutes of Health, and Melissa B. Harrell, PhD, associate professor at UTHealth School of Public Health.

The Paso del Norte Health Foundation funded the research, with additional support from the National Cancer Institute (U54 CA153505).