The Grass Really Is Greener on TV and Computer Screens, Thanks to Quantum Dots 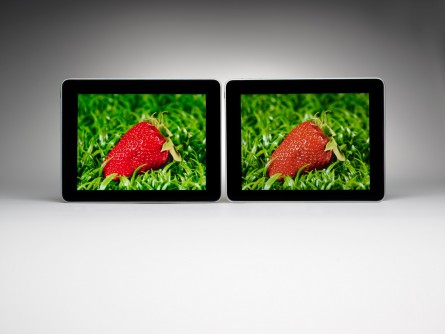 “Green grass just pops out at you from these displays,” says Eric Nelson, Ph.D., who helped create the plastic films that hold the quantum dots in a screen. “We believe this is the most efficient way to get to a high-color display.”

That’s because quantum dot, or “QD,” displays need less energy compared to other high-color options. QDs are superconducting crystals so small that 10,000 could fit across the width of a human hair.

Almost all electronics sold today, from TVs to smartphones, use LCDs. A typical LCD works by shining white light through a series of fliters that produce the colors the viewer sees. To achieve the best color, these filters need to be fairly dark. However, it takes a lot of energy to make the light bright enough for the viewer’s eye. The other problem, says Nelson, who is at the 3M Company, is that “you always tend to leak a bit of green into red, and blue into green, and so forth. So instead of ending up with a very pure red, you end up with an orange-y color. It’s difficult to get roses or apples to look very red on a conventional LCD.”

Rather than filtering light, QDs change it into a different color. The dots — made for 3M by Nanosys, Inc. — produce specific colors of light based on how big they are. In 3M QDEF displays, the LCD’s white backlight is replaced with a blue one, and a sheet of plastic embedded with QDs that produce red and green light is placed over it. The display combines these three colors to produce all the colors the viewer sees.

One drawback of the dots is that they break down quickly when exposed to water and oxygen in the air. To address this challenge, Nelson helped create the plastic sheathing that protects them. They sandwiched the QDs between two polymer films, with the QDs embedded in an epoxy glue. “The polymer/quantum dot sandwich looks like a piece of plastic film,” says Nelson. Coatings on the film provide further protection and enhance the viewing experience.

Nelson also will describe the environmental advantages of the technology. Because the QDEF displays need less light, they consume less electricity and help device batteries last longer than other high-color solutions. He says 3M’s tests have shown that the dots’ heavy metals — many of which are already found in today’s electronics — are entirely sealed inside the film. That means they won’t leach out during the products’ lifetime or as they languish in landfills if the displays aren’t recycled.

3M hopes QDEF technology will compete well with more costly displays like those that use organic light-emitting diodes (OLEDs). Nelson explains that OLEDs produce similarly brilliant colors to the QDEF displays, but they use individual lights to make different colors. The drawback to OLEDs is that they are much more costly to manufacture.

Although QDEF displays are more expensive than conventional low-color LCDs, Nelson says the cost will come down as the technology becomes more widespread and as manufacturing costs come down with increased production scale. Several devices featuring QDEF are already on the market, and more are on the way.