The Impact of a Changing Climate on Threatened Yellowstone Grizzly Bears 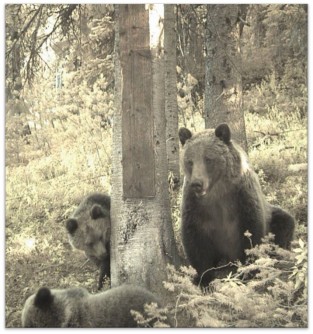 Grizzly bears photographed with a remote camera at a hair-snaring station in Cooke City Basin, Montana. 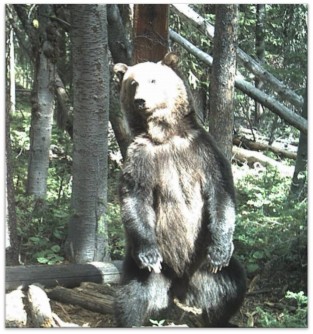 Newswise — Climate change is altering the environment in Yellowstone National Park and its surrounding region and scientists at the University of California San Diego and Unity College are studying its impacts on the diets of threatened grizzly bears.

A study published May 11 in PLOS ONE focused on modeling the diets of grizzly bears in Cooke City Basin, Montana, part of an area designated as the Greater Yellowstone Ecosystem (GYE). Evidence from the team’s research in the study area and a recent habitat-selection study by Montana State University indicates that grizzly bears continue to forage for whitebark pine seeds as a diet staple. Diet proportions derived from isotopic data, however, suggest that some bears could be responding to reductions in whitebark trees by consuming more plants and berries.

Once ubiquitous in western North America, the slow-growing whitebark pine trees have declined in recent decades and are now listed as endangered by the International Union for Conservation of Nature. Warming temperatures have led to shorter and milder winters, increasing beetle infestations and further threatening whitebark pine mortality. Other potential food sources for grizzlies such as trout and ungulates have also declined in the region.

“Whitebark pine trees have declined due to an introduced fungal disease called blister rust, and, more recently, to increased infestation by the mountain pine beetle, which is exacerbated by climate change,” said study coauthor Carolyn Kurle, an assistant professor at UC San Diego’s Division of Biological Sciences. “Such declines further highlight the need to monitor diets of grizzlies as the environment continues to change.”

Lead author Jack Hopkins, a former postdoctoral researcher in Kurle’s lab at UC San Diego and currently an assistant professor at Unity College, and his team measured stable isotopes in bear hair and related their abundances to those found in their foods.

“Stable isotope analysis is a powerful ecological tool for reconstructing the diets of animals,” said Hopkins. “Instead of investigating the diets of animals based on what’s eliminated (feces), we estimate the importance of major food sources to animals based on what’s assimilated into their tissues. Using stable isotope analysis to conduct a retrospective diet analyses can shed light on how animals, such as Yellowstone grizzlies, have responded to changes in food availability on the landscape.”

Previous research has shown that whitebark pine seeds—often cashed in large middens by red squirrels—are raided by grizzlies in the fall, fueling reproduction and ensuring the survival of grizzlies in the region. A main reason threatened grizzly bears have remained protected for decades is because it has not been clear how declines in whitebark pine trees, and thus the seeds they provide bears, will impact population trends over the long term.

Because their inferences are limited to a small area in the region and a small number of bears, the researchers recommend a large-scale study and urge others to use their new modeling framework to investigate the diets of other species of concern.

“Such analyses could be used to monitor grizzly bear recovery efforts and inform other wildlife conservation and management programs worldwide,” Hopkins added.

Coauthors of the study also include Jake Ferguson of the University of Idaho and Daniel Tyers of the U.S. Forest Service.

The research was supported by the U.S. Forest Service, Federal Highway Administration-Western Federal Lands, UC San Diego, the National Institute for Mathematical and Biological Synthesis at the University of Tennessee Knoxville, the Center for Modeling Complex Interactions, D. Ohman and G. Bennett. 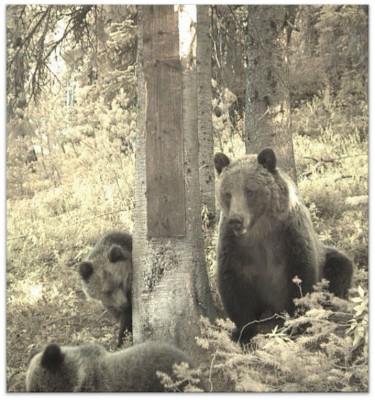 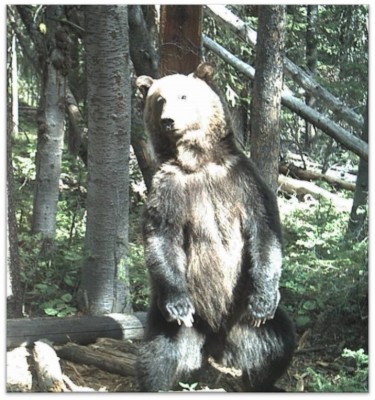