The Secret Lives of Sulawesi’s Civets 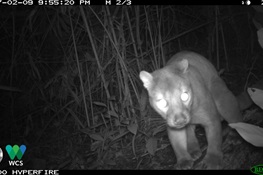 1. There has been a 20-year lapse since the last field record of the Sulawesi civet (Macrogalidia musschenbroekii), which is found only on the Indonesian island of Sulawesi, where it is the largest mammalian predator.

2. Researchers set up 148 camera trap stations across the forests of North Sulawesi, including in two of its main protected areas: Bogani Nani Wartabone National Park and Tangkoko Nature Reserve, recording civets 17 times at 12 stations, and in almost equal numbers in primary forest, secondary forest and farmland, including the first photographic records from both the National Park and Nature Reserve.