Theory of the Evolution of Sexes Tested with Algae 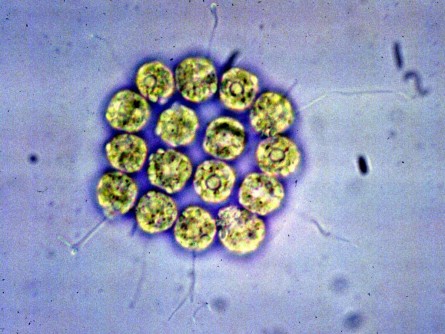 Volvocine alga, this one with same-sized gametes, was used to test the theory of evolution of the sexes

Newswise — The varied sex lives of a type of green algae have enabled a University of Adelaide researcher to test a theory of why there are males and females.

The question of why different types of sex cells evolved, such as sperm and eggs (collectively known as gametes), remains uncertain.

“Why should there be males and females? Why would a situation evolve where some individuals produce small gametes that are motile or capable of motion (the males) and others produce large, non-motile gametes (the females)?” says Dr Jack da Silva, Senior Lecturer in the University of Adelaide’s School of Biological Sciences.

“Sexual reproduction does not require males and females, all it requires is the fusion of sex cells from two different mating types.”

Dr da Silva has provided the first test specific to this theory – using the reproductive strategies of green algae.

“The theory is that as organisms evolve to be larger, the single-celled embryo (or zygote) is selected to be larger as well. This necessitates larger gametes to store more nutrients to give the embryo a head start in development,” says Dr da Silva.

“Organisms have a limited budget for producing gametes. So if there are more they will be smaller, if there are less they will be larger. Because greater numbers of gametes gives one mating type a selective advantage – more chance of successful fertilisation – the other mating type will be forced to produce larger, and therefore fewer, gametes to enable the production of the larger zygote.”

He derived a prediction from an existing mathematical model of the Disruptive Selection Theory that states that for the evolution of males and females to remain stable, the ratio of the size of the larger gamete to the smaller gamete has to be greater than three. The maths says that if the ratio is any less, they always evolve back to being the same size.

“The algae were perfect for testing this theory: they showed the whole range of variation of gamete size differences. And the theory held. Wherever there were gametes of different sizes, the larger ones were always at least three times bigger.

“This provides the first test that is specific to this theory – previous tests have been about predictions that are common to this and similar theories. To date there hasn’t been a lot of strong evidence in support of any of the competing theories, but here we have confirmed that the classic theory is probably on the right track.