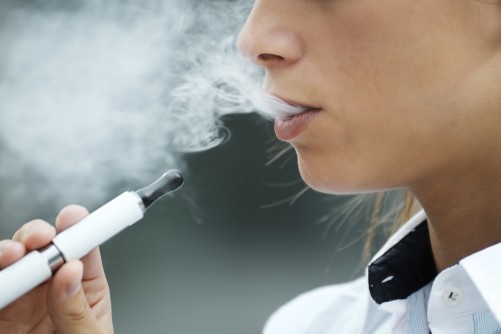 Writing in the journal Addiction, published online April 25, the researchers synthesize much of the evidence published to date on e-cigarettes, and suggest that use of these products can lead to reduced cigarette smoking overall with a potential reduction in deaths from cigarette smoking.

“We’re concerned the FDA, which has asserted its right to regulate e-cigarettes, will focus solely on the possibility that e-cigarettes and other vapor nicotine products might act as gateway to cigarette use,” says Levy, a professor in the department of oncology at the Georgetown Lombardi Comprehensive Cancer Center. “We believe that the discussion to date has been slanted against e-cigarettes, which is unfortunate, because the big picture tells us that these products appear to be used mostly by people who aready are or who are likely to become cigarette smokers,” adds Levy.

In the United States, smoking rates have fallen by 50 percent since their peak in the 1960s as a result of tobacco control policies, but smoking still contributes to high rates of premature mortality, the authors write. The 2014 Surgeon General’s Report stated, “the burden of death and disease from tobacco in the U.S. is overwhelmingly caused by cigarettes and other combusted tobacco products.”

E-cigarettes may counteract those health risks, and, Levy says, experts estimate that exclusive e-cigarette use is associated with about five percent of the mortality risks of smoking. He says that the evidence also suggests a strong potential for e-cigarettes use to improve population health by reducing or displacing cigarette use in countries where cigarette prevalence is still high and smokers are interested in quitting.

Levy and his colleagues report research in the U.S., Canada and England, that shows cigarette smoking rates have fallen more in the last two years than they have in the previous four or five years and that this trend has coincided with the increase in e-cigarette use. “While e-cigarettes may act as a gateway to smoking, much of the evidence indicates that e-cigarette use encourages cessation from cigarettes by those people who would have otherwise smoked with or without e-cigarettes,” Levy says.

The authors anticipate that their suggested framework will be controversial due to an ongoing debate about whether e-cigarettes will complement or undermine tobacco control efforts.

“We don’t want to encourage e-cigarette use by youth and young adults who would not have otherwise smoked. However, the primary aim of tobacco control policy should be to discourage cigarette use while providing the means for smokers to more easily quit smoking, even if that means switching for some time to e-cigarettes rather than quitting all nicotine use,” the authors write in their article.

The authors also warn that heavy regulation and taxation of e-cigarettes will counteract the benefit that these products can provide.

“Increasing e-cigarette prices by taxing them the same way as cigarettes will discourage youth VNP use, but also discourage use by smokers, especially those of lower socioeconomic status, who are trying to quit,” adds Levy.

The FDA through the Na¬tional Institute on Drug Abuse (1R01DA036497) funded this study.