Bacteria change surface of human intestine to benefit themselves 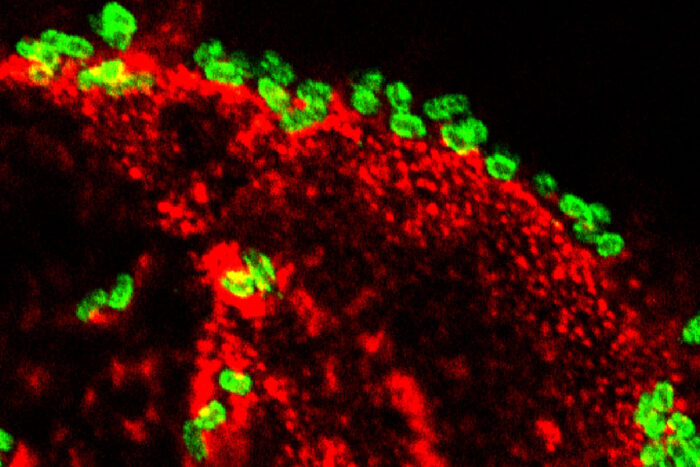 Toxin-producing E. coli bacteria (green) attach to human intestinal cells expressing the protein CEACAM6 (red). A study from researchers at Washington University School of Medicine in St. Louis has found that a toxin produced by E. coli changes intestinal cells to benefit itself, an ability that could provide a clue to why the bacteria have been linked to nutritional problems such as malnutrition and stunted growth.

Newswise — For people in wealthy countries, diarrhea is usually nothing more than an uncomfortable inconvenience for a few days. But for a poor child in a developing country, repeated bouts of diarrhea can lead to serious health consequences such as malnutrition, stunted growth and cognitive deficits.

Researchers at Washington University School of Medicine in St. Louis have discovered that a toxin produced by the bacterium Escherichia coli (E. coli), long known to cause diarrhea, also has other effects on the human digestive tract. The toxin, they found, changes gene expression in the cells that line the inside of the gut, inducing them to manufacture a protein that the bacterium then uses to attach to the intestinal wall.

The findings, published Nov. 17 in Proceedings of the National Academy of Sciences, offer a clue to why recurrent but short-lived episodes of diarrhea could lead to long-term nutritional problems.

“There’s more than meets the eye with this toxin,” said senior author James M. Fleckenstein, MD, a professor of medicine and of molecular microbiology. “It is basically changing the surface of the intestine to benefit itself, probably ultimately to the detriment of the host. Decades ago, people worked out how the toxin causes diarrhea, but until recently, nobody really had the tools to delve into what else this toxin might be doing. We’re trying to put together the pieces of the puzzle to find out how toxin-producing E. coli might be driving malnutrition and other ripple effects of diarrhea.”

Fleckenstein and first author Alaullah Sheikh, PhD, a postdoctoral researcher, study enterotoxigenic E. coli (ETEC), a toxin-producing strain of E. coli that is a common cause of severe, watery diarrhea. The bacterium’s so-called heat-labile toxin causes ion channels on intestinal cells to open, triggering an outpouring of water and electrolytes into the digestive tract — in other words, diarrhea.

Since oral rehydration therapy was invented in the 1970s, deaths from diarrhea have dropped by more than 80% worldwide. While invaluable at helping people survive a bout of diarrhea, the therapy does nothing to reduce the number of cases. Worldwide, young children still develop diarrhea an average of three times a year, with the youngest and poorest children bearing the brunt of the caseload — and of the long-term health consequences.

Fleckenstein and Sheikh speculated that ETEC’s heat-labile toxin might be doing more than just causing acute diarrhea and dehydration. If so, it might explain the link between ETEC and malnutrition, stunting and other problems.

To find other ways the toxin affects the gut, the researchers grew human intestinal cells in a dish and treated the cells with the toxin. They found that the toxin activates a set of genes known as CEACAMs. One in particular — CEACAM6 — codes for a protein that is normally in cells of the small intestine at low levels. Further experiments revealed that the toxin causes cells to produce more CEACAM6 protein, which the bacteria then uses to attach to intestinal cells and deliver even more toxin. Moreover, using intestinal biopsy specimens from people in Bangladesh infected with ETEC, the researchers showed that CEACAM6 expression increases in the small intestine during natural infection.

“CEACAM6 is expressed in what is called the brush border of the small intestine, which is where all your vitamins and nutrients get absorbed,” Sheikh said. “This is one of the first pieces of evidence that ETEC can change the intestinal surface. We don’t yet know how long that lasts and what that means for people who are infected, but it stands to reason that damage to this part of the body could affect the ability to absorb nutrients.”

Fleckenstein, Sheikh and colleagues are continuing to study the link between ETEC and malnutrition, stunting and other health consequences.

“We are trying in the lab to understand the role of ETEC and its toxins as they relate to nondiarrheal effects of ETEC infection, particularly in young children in developing countries,” Fleckenstein said. “There’s a lot of work to be done to explore how the toxins might be related to these long-term consequences of diarrhea.”