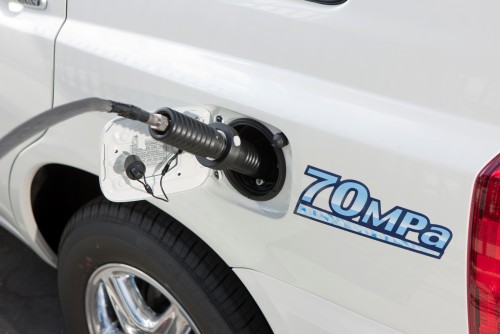 Newswise — SAN FRANCISCO, Aug. 4, 2014 — Carmakers like Toyota have long touted the eco-friendly virtues of zero-emission hydrogen fuel-cell vehicles, but commercialization was hindered by the high cost of critical materials and infrastructure. Now, Toyota has cut costs by 90 percent and German industrial gases and engineering company Linde AG will start small-series production of hydrogen fueling stations. Some of the stations are slated to open in California as Toyota debuts its Highlander hydrogen fuel-cell electric vehicle (FCEV) in 2015.

As part of the 248th National Meeting & Exposition of the American Chemical Society (ACS), the Toyota Highlander FCEV will be on display at the Exposition, and the head of Linde’s U.S. hydrogen fueling team, along with nationally recognized chemical engineers, will discuss this transportation revolution during a press conference.

The Toyota Highlander FCEV can travel five times farther than currently available electric vehicles before recharging, refuels in minutes and emits only heat and water vapor — not fossil-fuel emissions — a huge benefit in reducing the impacts of climate change. The Toyota Highlander hydrogen FCEV will be on display at the Moscone Center from 9 a.m.–5 p.m., Monday and Tuesday, August 11-12, in the ACS Exposition, Halls B & C. A Toyota specialist will be on hand to answer questions.

The 248th National Meeting & Exposition of the ACS will feature nearly 12,000 presentations on cutting-edge, scientific research in a wide range of chemistry disciplines.