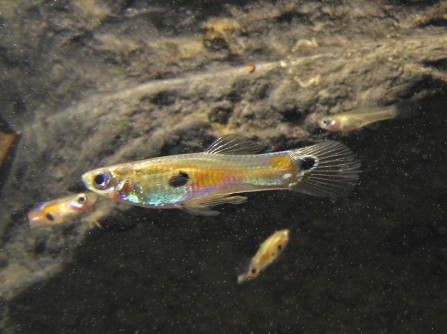 A flashy male guppy from an above-the-waterfall population. 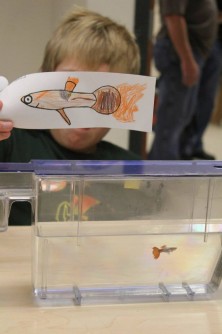 A student holds up a drawing of a guppy 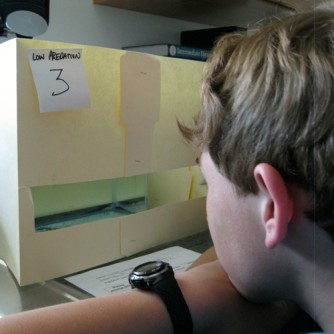 2016 annual conference of the Society for Integrative and Comparative Biology

Newswise — When imagining the Caribbean island of Trinidad, guppies aren’t usually the first thing to come to mind. Yet, the tiny, wiggly fish in the island’s lush mountain streams are famous amoung biologists as an important system for the study of evolution. The rivers contain guppies, along with the larger predators that eat them. Most rivers are also punctuated by waterfalls, which gives a few plucky, lucky guppies the chance to forge their way upstream to safety, leaving the predators behind in the pool below. Forever.

“As you might expect, the predators exert a selective force on the guppies,” explains E. Dale Broder, a graduate researcher who studies evolution at Colorado State University (CSU) in Fort Collins.

Below the waterfalls, “they tend to be dull, they tend to shoal [stick together].” But the real action happens above, where success becomes a matter of attracting attention, rather than avoiding it.

In the safe haven above the waterfalls, “a lot of the mate choice is driven by females,” resulting in flashier coloration, differences in body type, and exaggerated courtship behaviors among male guppies.

Within 5 to 10 years, the versions of genes (‘alleles’) that code for these traits become more abundant in the predator-free pools. All this sums up to a situation that perfectly fits a basic definition of evolution: a change in allele frequencies over time. The short time scale specifically reflects ‘micro’ evolutionary change, which is sometimes accepted by ardent opponents of evolution. But this same definition applies to ‘macro’ evolution, the process that defines species over aeons, and both are well-accepted among scientists.

Conveniently, this scenario not only exemplifies evolution occurring right before our eyes, it does so in a species that survives well in captivity and can be readily transported to 7th grade classrooms in Colorado.

“I didn’t really have any exposure to evolution until undergrad,” says Broder, “or, at least, it wasn’t memorable.” Her experience is not unusual—teaching evolution at the middle school level is notoriously difficult. Less determined teachers have been known to abandon the unit entirely, or teach it cryptically, to avoid conflict among students with polarizing preconceptions. But even those who tackle it wholeheartedly often fall short.

Stephanie Simmons, a veteran teacher at Severance Middle School in Windsor, Colorado, had really given it her best. “I’d just tried a huge variety of different things and just never found anything that the students seemed to grasp,” she explains. Inspired to change the landscape for the next generation, Broder applied for a small grant from the Society for the Study of Evolution and arranged a collaboration with Simmons, two other local teachers, and two university colleagues to spearhead a new approach to introducing evolution in K-12.

In the resulting four-day module, students observed live guppies, formed hypotheses, and worked as a class to design and perform experiments by matching males from different populations with females and with predators.

Asked what the students liked best, Simmons laughs. “They ‘ew’ and ‘ick’ when we would feed the guppies to a predator,” she says. The predators were larger cichlid fish who “had to eat, anyway,” according to Broder. But also, Simmons says, “being able to sit and watch fish being fish, and see the mating behaviors… it all just really engages them immediately.”

The spectacle of seeing live fish aside, however, the module is also exceptional in that it meets the gold standard for science instruction in K-12: it provides an “authentic science” experience for the children. In an ideal world, this is the way that all science would be taught. Student-driven, inquiry-based instruction is demonstrably more effective, and active, process-oriented standards are gaining prevalence across the states.

However, authentic research projects are extraordinarily difficult to arrange. “A real science investigation is not something that happens in an hour,” says Simmons. Re-working “real” experiments to fit the time frame, the budget, the skill level, and the safety requirements for K-12 requires time, resources, and expertise in both research science and education. Collaborative efforts like this one are uniquely suited to the design of such projects.

Authentic science is arguably the best practice for teaching any scientific subject, but it is particularly well-suited to the teaching of evolution. In this case, it was only after plotting the data, on the very last day of the module, that key concepts and vocabulary were introduced to build towards the “E” word—evolution.

When the 7th grade researchers finally arrived at the discussion of evolution, Broder says, “all the students were just nodding their heads.” The teachers were amazed. “For me,” says Simmons, “it’s the thing I was always searching for, it’s ‘Oh there it is!’—that one piece that really helps the students get it.”

Testing reinforced the teachers’ impressions—students who participated in the authentic science module learned significantly more than students in a different class. They also expressed more accepting opinions about evolutionary concepts at the end of the unit.

The success of this module has inspired further work to extend its use beyond the classrooms of the collaborating teachers and make a similar experience available to all schools in Northern Colorado. A kit is under development, with funding from the National Science Foundation, that will be made available for loan from the Outreach and Education Center at CSU. The kit will include live guppies, a first for the center. However, the squeamish need not fear—encounters with peckish predators will be limited to video recordings.

E. Dale Broder presented her work at the 2016 annual conference of the Society for Integrative and Comparative Biology in Portland, Oregon. Emily A. Kane, a postdoctoral scholar in the same research group, also presented a poster detailing the guppy kits under development.