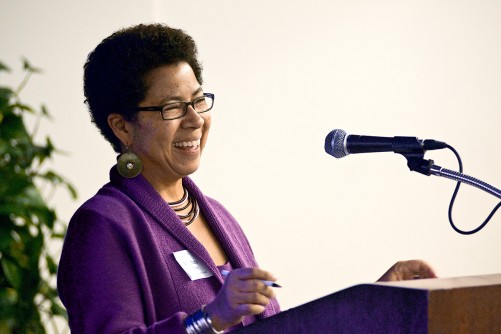 Barbara Ransby, director of the Social Justice Initiative and founder of The Portal Project.

Newswise — The Portal Project of the Social Justice Initiative at the University of Illinois Chicago has received a $1.5 million grant to support its work to break down silos and collectively map visions for transformative change.

UIC is one of four recipients of the one-time grant by the Marguerite Casey Foundation, which announced a $6 million investment split among four organizations working toward bridging the worlds of social justice scholarship and social movements. The investments are aimed at shifting the balance of power in society to those who have long been excluded from having it.

The Portal Project launched in 2021, focusing on three topic areas: abolition, economic democracy and climate justice. It will continue through the spring of 2023, culminating in a national conference and book publication.

“Over the past year, the Portal Project has convened nearly 200 scholars, artists and activists to explore the meaning of justice in the 21st century, centering those communities most impacted by various forms of injustice,” said Barbara Ransby, director of the Social Justice Initiative and founder of the Portal Project. “Through workshops, symposia and public forums, we have engaged a brilliant and eclectic group of thinkers and doers in conversations that wrestle with some of the most complex justice questions of our time.”

“This generous grant will allow us to deepen and expand our work in creative and meaningful ways,” said Ransby, the John D. MacArthur professor and chair in Black studies, gender and women’s studies, and history. “The Portal Project is not only an interdisciplinary, intergenerational site of new knowledge creation, but we also seek to make the collective insights produced through our work accessible to a wide and diverse public through books, graphics, videos and art exhibitions.”

Critical to the foundation’s strategy is supporting leaders that are matching their ideas about how to shift power with efforts that put those ideas into action, Rojas said.

The Portal Project was inspired by the words of the acclaimed Indian writer Arundhati Roy, who reminds us that, historically, “pandemics are portals” and opportunities to embrace new ways of thinking and being. What often inhibits us from identifying the most creative and transformative solutions is that we operate in many stifling siloes based on disciplines, differences and areas of work.

Some of the scholars involved in the Portal Project have included: Angela Davis, political activist, philosopher, academic and author who has lectured around the world; UCLA Professor Robin D.G. Kelley, award-winning historian, essayist and scholar whose work focuses on labor, race and resistance; Princeton Professor Keeanga-Yamahtta Taylor, a MacArthur fellow and scholar of racial inequality in public policy, whose 2019 book “Race for Profit” was longlisted for a National Book Award and was a finalist for the Pulitzer Prize in History; and Naomi Klein, a renowned author and journalist who has covered climate justice, activism, inequality, policy and politics.

The Marguerite Casey Foundation supports leaders, scholars and initiatives focused on shifting the balance of power in society-building power for communities that continue to be excluded from shaping how society works and from sharing in its rewards and freedoms. The foundation’s board members, leadership and staff are committed to building a just economy and fully realized democracy, and to providing unfettered support to the bold strategies that are required to bring about major change in our lifetime. Supporting scholarship, popular education and writing on justice themes is a critical part of that mission. In 2020 the foundation launched its Freedom Scholars Awards, and Ransby was an inaugural recipient.