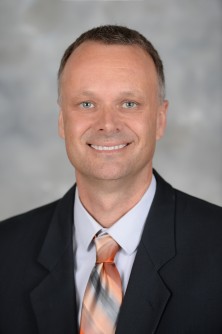 Dr. Dominik Güss, professor in the Department of Psychology in the College of Arts and Sciences at the University of North Florida, has been selected as the recipient of the John A. Delaney Endowed Presidential Professorship

Newswise — Dr. Dominik Güss, professor in the Department of Psychology in the College of Arts and Sciences at the University of North Florida, has been selected as the recipient of the John A. Delaney Endowed Presidential Professorship, which recognizes a professor’s significant accomplishments as a researcher and provides the resources to carry out his or her scholarly agenda.

Güss, a Southside resident, has been awarded $7,500 for the professorship, which carries a full-term appointment of three years this fall semester. Financial support for this award was provided by Joan Wellhouse Newton and her sons, Martin E. Stein Jr., Richard W. Stein and Robert L. Stein.

“Dominik is an accomplished member of our very active Department of Psychology,” said Dr. Earle Traynham, provost in the Division of Academic Affairs at UNF. “He’s a person that is strongly involved in teaching and at the same time productive in his research, which demonstrates this double commitment is not only possible but is also combined with great success in both areas.”

During his more than 10 years at UNF, Güss has worked to broaden the types of courses offered by the Department of Psychology, developing and teaching five new courses, including organizational behavior and culture, ethics and mental health. He was also one of the department’s first faculty to develop a distance learning course. Last year, Güss was presented the 2016 Distinguished Professor Award and in 2006, he received the Outstanding International Service Award from the University.

His research interests include complex problem solving and dynamic decision making, planning and creativity, metacognition and cross-cultural studies. Güss has conducted multiple international research studies, including one regarding cultural influences on dynamic decision making that included research in Brazil, Germany, India and the Philippines through a grant from the National Science Foundation and another on culture and creativity in five countries funded through a Marie Curie Fellowship IIF from the European Commission.

In 2007 and 2011, Güss was selected to present at the prestigious Posters on the Hill in Washington, D.C. Along with students, he presented research about risky business decision making and suicide terrorism to senators and state representatives.

Güss is the author of more than 25 peer-reviewed publications, eight peer-reviewed proceedings and more than 15 book and encyclopedia chapters. He is currently a member of the editorial board of the “Journal of Dynamic Decision Making,” review editor of the “Cultural Psychology of the Journal” a publication of “Frontiers of Psychology” and an associate editor of “Behavioral Sciences of Terrorism and Political Aggression.”