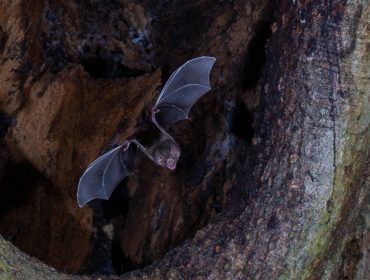 A common vampire bat (Desmodus rotundus) in Lamani, Belize, exiting its tree roost to search for its breakfast of mammalian blood.

The News in Brief:

Newswise — STONY BROOK, N.Y., September 19, 2019 – The sense of smell is one of the most poorly understood of the five major senses. But now an international team of scientists led by Laurel Yohe of Stony Brook University suggests a new method to quantify olfactory receptors by sequencing them in vampire bats may hold the key to unraveling the mysteries of smell. Their findings are published this week in Molecular Ecology Resources.

According to Yohe, a PhD alumna and affiliated research associate in the lab of Liliana Dávalos in the Department of Ecology and Evolution, as well as a National Science Foundation Postdoctoral Fellow at Yale University, understanding how to obtain accurate numbers of olfactory receptor counts in the mammalian genome is major aspect to understanding the sense of smell. The difficulty is that genes related to smell are highly similar to one another, and therefore determining the correct sequencing of the hundreds of olfactory receptors is difficult and similar to analyzing many pieces of a puzzle that are nearly the same.

The research was funded in part by the National Science Foundation (Grant numbers NSF-DEB 1701414 and NSF-DEB 1442142) and the American Society of Mammologists.

Stony Brook University, widely regarded as a SUNY flagship, is going beyond the expectations of what today’s public universities can accomplish. Since its founding in 1957, this young university has grown to become one of only four University Center campuses in the State University of New York (SUNY) system with over 26,000 students, more than 2,700 faculty members and 18 NCAA Division I athletic programs. Our faculty have earned numerous prestigious awards, including the Nobel Prize, Pulitzer Prize, Indianapolis Prize for animal conservation, Abel Prize and the inaugural Breakthrough Prize in Mathematics. The University offers students an elite education with an outstanding return on investment: U.S.News & World Report ranks Stony Brook among the top 40 public universities in the nation. Its membership in the Association of American Universities (AAU) places Stony Brook among the top 62 research institutions in North America. As part of the management team of Brookhaven National Laboratory, the University joins a prestigious group of universities that have a role in running federal R&D labs. Stony Brook University fuels Long island’s economic growth. Its impact on the Long island economy amounts to $7.38 billion in increased output. Our state, country and world demand ambitious ideas, imaginative solutions and exceptional leadership to forge a better future for all. The students, alumni, researchers and faculty of Stony Brook University are prepared to meet this challenge.